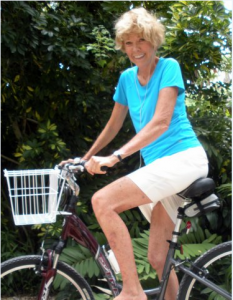 Jewelry designer Diana Kahlenberg works from her gulf front home on Siesta Key. The stilted structure faces Big Pass in a setting of rare tropical beauty. The home was originally designed by Tim Siebert for author John D. MacDonald and his wife, Dorothy. The view is dramatic, and the building sits atop tree trunks that rise to the roof and are revealed to the interior.

Diana began by making jewelry purely for herself. “I didn’t want rubies and platinum, I wanted something more organic: carved stones, amber, ivory, lapis, blue jade from Burma.” These beads and small carvings were ones she had collected on travels. People began to notice Diana’s necklaces, bracelets and earrings—all strikingly original. Eventually she showed her designs to stores, and a business was born. The Sarasota Ritz Carlton now handles her work, and so does the Greenbrier Resort in White Sulphur Springs, Va. It is also on display at Yarids in Charleston, WV, the Swim City stores in Florida, and other fine shops.

How did a little girl from Indiana end up creating such exotic jewelry?

When she was ten, her parents moved to Florida, settling in Charlotte Harbor. Diana loved the 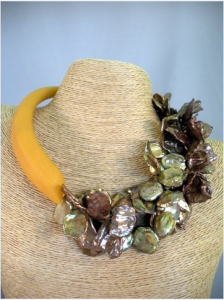 tropics from the very beginning. “Coming here as a child, this was such a romantic place. I could run on the beach barefoot. I could pick wild oranges.” She soon developed a ‘do-it-yourself’ attitude, which she attributes to the fact that her father owned a plumbing, heating, and air conditioning business. She and her brother were forever tinkering with old boats, and taking them out into the giant harbor. Tall and blonde, Diana was named Tarpon Queen in Punta Gorda while still a student in high school.

Married at 17, Diana soon was the mother of two great kids. She was also leaping through career barriers. Armed with her high school diploma yet too young to have a realtor’s license, she started working for Cape Coral Development Corporation. When she turned 21, she got her license, and soon opened an office for Cape Coral here in Sarasota. Her youthful marriage proved too 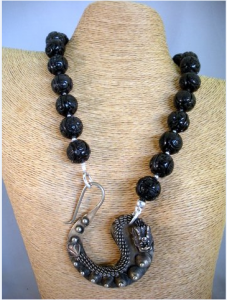 fragile to last, but Diana never looked back. Before long, she became a broker, opening her own office in Sarasota at the intersection of Rose and 41. It was called Real Estate Showcase: she ran it for 20 years—first with a partner, and then on her own.

Always an ardent sailor, she met Hardy Kahlenberg—a man with a pharmaceutical lab and a doctorate in Chemistry. Before long they were married. A sailing enthusiast, Hardy had developed anti-fouling hull paint for boats, a paint that served as protective coating

Living on Siesta Key, the Kahlenbergs often sailed in and out of Big Pass. As they went by the MacDonald House, Diana would think “Oh, wouldn’t that be a wonderful place to live!” Little did she know that this beautiful building would one day become her home and her studio. 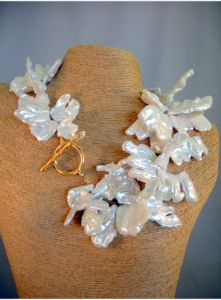 Tragically and prematurely, Hardy died. Diana worked for eight years building the sales of Hardy’s paints before selling the business to Rule Chemical. She then turned the property into what is now known as Ashton Center Industrial Park, a business her son runs today. Always creative, Diana turned to the a

rts, making masks, tile mosaics, faux painting and shell collage. Her only formal training was in photography, which she studied with Pete Carmichael, a famed Sarasota nature photographer and teacher.

After remarrying, Diana became a director of Omni Films, helping to produce and market 70mm films, 3-D films, and motion simulator films. The company also built theaters all over the globe

to serve this unusual equipment. Over the next years, she worked and traveled in Europe, Africa, the

South Pacific, China, and dozens of other countries, many far from the beaten track. It was during those travels that Diana began collecting small objects that might be used in the creation of unique, artistic jewelry.

Wherever she went, she used her artist’s eye to discover extraordinary things: a carved snail coming out of its shell carved from a hippopotamus tusk; an obi fastener shaped like a frog carved out of bone. Of that frog Diana laughs, “I love the fact that he’s got this little bow tie and is sitting in a cross-legged yoga pose.”

Increasingly, she returned from travels with suitcases stuffed with tiny objects. Later these miniature works of art would show up in the center of a stunning necklace or bracelet, or even dangling from a pair of ears. The remarkable Diana K necklaces average $300 to $600 in price, although some go as high as $3,000.

which she used in some of her most dramatic jewelry. She was drawn to large vintage shells which were worn by natives. Today, Pinctada Maxima shells found in the sea grow much smaller. “I just got another antique Kina from Papua, New Guinea. Years ago they were used as currency. Australian miners gave them to natives in exchange for working in the gold mines. Until recently, you could still take a Kina shell into a bank in PNG, and trade it for its value.”

Currently, Diana finds some of her jewelry components at the big Gem Show in Tucson. She goes every year and knows which vendors handle the type of pieces she might like. She has even created jewelry from old Coptic prayer scrolls made out of goatskin, pounded thin. These leather scrolls are at least 150 years old, and each one is hand-lettered in a dead Egyptian language called Ge’ez.

Additional photos of her work can be seen at www.DianaKjewelry.com , and her e-mail is: dkahlenberg@comcast.net. Like her jewelry, Sarasota’s own Diana Kahlenberg is truly an original.