Reviews of movies and plays often tell you not only that there is a butler in a production, but that “the butler did it”. I always think that that approach spoils the fun a bit for potential attendees. I do want to know the name of the director and those of the actors, if they perform well, if things are realistic, and the amount of gratuitous violence. With that knowledge (and a bit more) I can make a decision on whether to attend or not.

There is an upcoming six month long exhibition at Selby Gardens, opening February 12th, that is going to be a knock-your-socks-off kind of art-flower-music pleasing showing of flowers, stained glass, flowers, paintings, flowers, dance, music, flowers, ballet and theater. Oh, and did I mention “flowers”? All of this ART will be part of an exhibition entitled Marc Chagall, Flowers, and the French Riviera: The Color of Dreams. 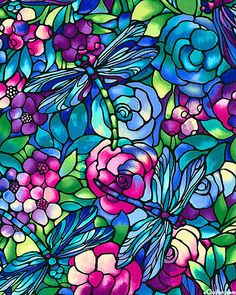 Central to the show is Chagall’s 1937 painting The Lovers, on loan from the Israel Museum in Jerusalem. There will also be two other Chagall paintings which have never been exhibited before. In doing research on this exhibition I came across images of those two paintings which I could show here. But they would be less than one 100th of the size of the actual paintings, the colors would be off, there would be no depth to the images and they would not be set amongst the gorgeous flowering plants at Selby Gardens. Instead, here is a photo of a stained-glass image of flowers made from a Chagall painting. There will be many such pieces surrounded by flowers throughout a glass conservatory during the exhibition. To make the Selby more like the French Riviera, where Chagall spent much time painting, they will enhance the 15 acre gardens with extra bougainvillea, citrus trees and orchids.

Walking around the Selby in the sunlight will accentuate the brilliant colors of the paintings, stained-glass and flowering plants, but on certain nights there will be a brilliance of another kind. Alumni from the Youth Orchestra of the Perlman Music Program will be performing in the gardens the evening of February 15th, using violins that are part of a separate traveling exhibition, the Violins of Hope, On March 9th, in the Selby Café (now Michael’s on the Bay at Selby Gardens), the Sarasota Opera will perform. In the 1940s and 50s Chagall designed costumes for a number of ballets, so it is fitting that on April 5th the Sarasota Ballet will be providing the entertainment for a special evening. Following the ballet will be two weeks (April 11 – 29) of Shakespeare’s A Midsummer Night’s Dream. The Selby Gardens will be the perfect setting for this Asolo Rep Conservatory production. The Perlman players return on May 17th and on June 14th there will be a performance that is part of the Sarasota Music Festival. These evening performances, from 6 – 9 PM, are all part of Chagall Nights – prices include the performance, a cocktail, hors d’oeuvres and a nighttime tour of the exhibition. Lots more information on Chagall lectures as well at Selby.com.

Florida Studio Theatre’s Stage III has been known as the spot for edgy dramatics. Over the years they have presented, among others, “Hedwig and the Angry Inch”, Albee’s “The Goat, or Who is Sylvia”, and “The Lieutenant of Inishmore”. This year edginess is back in with the G-Words “Gidion’s Knot” and “Grounded”.

A Gordian knot is one where the ends are tucked inside so that one does not know how it may be untied. Alexander the Great, when presented with this puzzle, solved it by slicing the knot in two with his sword. A rather dramatic approach but one which, for him, got to the heart of the matter. Gidion’s knot is just as dramatic as the Gordian one, and is as tightly woven. But like the ju 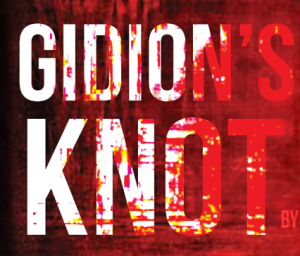 dgement of Solomon, cutting the problem in half is not the solution, it is the picking and prodding which unravels this dispute. A parent/teacher conference is the venue where a mother and a teacher discuss the suicide of a student, the mother’s son: Was he victim or bully and who was responsible? Unlike the Gordian knot and the judgement of Solomon, these are not allegorical tales from mythic times, but today’s real problems which, here, are parsed the way sentences in English class no longer are. To quote DCTheatreScene, “Gidion’s Knot is as sad as life itself, and as funny and startling as well…a beautiful, disturbing story.” Johnna Adams’s play is presented at FST’s Bowne’s Lab Theatre (Cocoanut and First Street) from February 15th – March 3rd. For dates and times please go to FloridaStudioTheatre.org to see more about the 12 shows that the FST theaters have left this season.

Information will also be available there about Grounded (March 22 – April 7). Like the Gidion play, this is also about a knotty problem. A highly skilled Air Force fighter pilot is transferred to duty as a drone operator in the desert on the outskirts of Las Vegas. George Brant’s play is not just about the boundaries between the pilot’s old and new life or of the desert in which she lives and the one in which she hunts, but about how women’s roles play out in the military and in a family situation. It appears that such boundaries know no bounds.

The southwest had the Tijuana Brass, up north there is the Canadian Brass and here on the Gulf Coast there is the First Brass of Sarasota. This summer (yes, as of this writing, February seems like it may be the first month of summer) The First Brass Five, along with noted vocalist Sharon Scott, will be celebrating Mardi Gras at two local venues. They will be appearing at St. Paul Lutheran Church (2256 Bahia Vista St.) on February 19th and at St. James Methodist Church (2049 N. Honoré Ave.) on February 26th. Performances are at 4 p.m. on both days. The words “Mardi Gras” are from the French and mean “Fat Tuesday”, and relate to eating as much as possible on that particular Tuesday before giving up all the foods you like, for Lent. In England they celebrate Shrove Tuesday – when many from English speaking countries eat pancakes. Shrove derives from shrive, meaning to absolve. As far as can be told, on that particular day, the French eat as if there is no tomorrow and the English absolve those who do, even if they don’t. 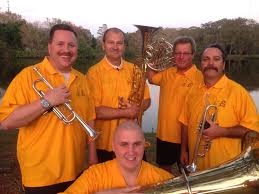 Miss Scott has performed here in Sarasota in the national touring company of Ain’t Misbehavin', and with the Sarasota Symphony. Her inflections on the sounds of New Orleans should be worth hearing. First Brass of Sarasota’s founder, Gary Reinstrom (French Horn and Trumpet), is also the artistic director (and player of the pipes) of The Jacobites Band, a Scottish musical organization that terrorizes many of the people who think Kilties are either a breed of dog or a kind of shoe. On May 29th the 10th Annual Jacobite/First Brass Memorial Day Tribute is scheduled for St. James United Methodist Church at 3:00 PM.