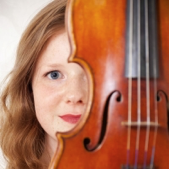 When it’s June in Sarasota, that’s when. Spring is turning into summer and the Sarasota Music Festival is turning in a stellar series of 13 performances at the Sarasota Opera House and Holly Hall. Composers, they have a few – from the well known to the little heard. Yes, they do have Beethoven, Rachmaninoff and back to back Bach, but they also have Ibert, Maslanka and Andres. Surly you will want to email all your snowbird friends that you’ve just heard Röntgen-Maier’s Violin Sonata in B Minor – and then gloat while they rush to their copy of Grove’s Dictionary of Music and Musicians to get the real skinny on that fair 19th century Swedish violinist/composer.

The festival kicks off on June 8th with Three Preludes by Gershwin: all light and fanciful with overtones of Brazil, the blues and some Spanish flamenco. And while not unlucky, two pieces on this program are quite haunting: Three pieces for Horn (French horn and piano) by Glière and Rachmaninoff’s Cello Sonata in G Minor. And, of course, to add some flair, this session will include Beethoven’s Piano Sonata no. 17 (Tempest). The all Bach concert on June 9th is also all Brandenburg, with 27 different musicians performing in the six concertos. A student recital (yes, the festival is also a training ground for up and coming new artists) is set for Sunday, June 11th with a unique roster of composers from Fauré (piano quartet) to Dvorák (piano quintet) to Nielsen (wind quintet) to Schubert (string quartet) and yes, a bit of Beethoven (string quartet) as well.

A must see/hear program is on June 15th with current and previous festival music directors Jeffrey Kahane and Robert Levin performing Schubert’s Fantasie in F Minor for piano, four hands. To hear both, together will be a unique treat. The opening and closing acts on this day will be works by Telemann and Dohnányi. On the 23rd there will be six commissioned pieces performed by a new ensemble, yMUSIC (your typical trumpet, flute, clarinet, violin, viola and cello group), from New York.There will also be a quite lyric wind quintet by Haas as well as Schumann’s melodic Piano Quartet in E-flat Major.

For many years Robert Levin has been giving music lectures while also holding down the post of Music Director. While he has passed that position on to Jeffrey Kahane, Mr. Levin continues with his lectures. This year’s will be on June 17th. Not detailed here are seven other performances as well as the master classes, orchestra and artist rehearsals, and ensemble coaching which may also be attended by those who wish to see how the music develops. More information on the venues and times, as well as greater details on the selections being performed, the 40 faculty members and the 60 students, may be viewed at SarasotaOrchestra.org/Festival. 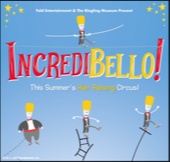 The Ringling Bros, Barnum and Bailey Circus has been shut down

So, where can we see a circus in June and July? Why up near the Ringling museum, of course, just a thousand feet from John and Mable Ringling’s home, Ca’ d’ Zan. Sort of like “The King is dead. Long live the King.” Truth be told, it is not the Ringling Circus that is coming to the Historic Asolo theater, but the star of the show is Bello Nock, who amazed and astounded Sarasotian circus-goers when he was a headliner with the Ringling Circus for 8 years. And he, and his new show IncrediBello!, is being presented by the Feld organization, which purchased the Greatest Show On Earth from John and Henry Ringling North in 1967. Sort of a case of what comes around, goes around.

Performing in Sarasota is natural for Bello as he was born here to a long line (try seven generations) of circus performers that started their own circus in Switzerland in the 1700s. A late bloomer, Bello did not start in show business until he was three, when he appeared in the Disney production Dumbo’s Circus. Three years ago he was on Good Morning America and continued to give media interviews in New York for eight straight hours – while balancing on a high-wire over Times Square the entire time.

It is almost certain that Bello will be up on the high wire during his shows at the Asolo but, as his career has been a long one, there are plenty of other acts from which to choose. Some of his most daring involve riding a motorcycle on the high wire and running and jumping on the outside of a spinning steel wheel while it twists and turns overhead. Given the small size of the stage at the Asolo, Mr. Nock will probably not do his acrobatic feat of leaping over an elephant but may do some of his bungee and trampoline stunts. Perhaps he feels safe while doing his work because he builds and replaces all of his own gear.

The twice per day shows start on June 13th and continue through July 29th. The reasonably priced tickets (check times and dates) can be purchased at www.Ringling.org/events/Incredibello.

It can get fiercely hot here in Sarasota so why not fly away to Brazil. Remember, south of the equator the seasons are reversed so you will be having a winter get-a-way. And, if you leave Rio you can chill out deep in the shade of a rain forest. What, the kids will drive you crazy on such a long flight but you still like the idea of the rain forest? Problem solved: take them to Splashin’ Saturdays at Selby Gardens from June 10 – July 15. There, from 10 AM until Noon, there will be water slides, activities and games for toddlers to 10 year olds around the lagoon and the waterfall of the Ann Goldstein Children’s Rain Forest. There are not only fun places for the kids to explore in this magical place but, for adults, there is beauty in every direction. What better way to spend a Saturday morning, reading a book or newspaper while your kids splash themselves silly. Afterwards there can be a light lunch at the Selby House Café before strolling through the gardens for a leisurely look at all the botanical beauties.

Don’t have water/rain forest oriented kids to deal with but are still reading this column? Then how about Monday mornings doing Yoga in the Gardens: Session II starts on June 5th, or the Tuesday morning watercolor sessions. Plus the on-going show Marc Chagall, Flowers, and the French Riviera: The Color of Dreams is still going on through the end of July. As they say “All this and more” at Selby.org.