How old does New Music have to be to no longer be new?

Have you ever been to Berlin? Were you there in 1912? Bummer, as you missed the premiere of Arnold Schoenberg’s tour de force Pierrot Lunaire, which was a resounding success. But not to worry, it still sounds new and is being performed at Club Sudakoff, as part of the New Music New College series, on November 5. It is a chamber piece, with flute, clarinet, violin, cello and piano accompanying the soprano Lucy Shelton. This composition, along with Stravinsky’s The Firebird and Le Sacre du Printemps, Scriabin’s Prometheus and Debussy’s L’Après-midi d’un Faune,  were outstanding creations of The Modernist Group of 1910 – 1914, and first performed in Paris and Berlin.

This chamber work is not being performed by the original artists, who are mostly retired (or interred), but by the Da Capo Chamber Players who are based in New York. The New York Times review of this piece said that “Lucy Shelton offered a haunting, arresting interpretation that illuminated the strangeness of Schoenberg’s atonal score, set to poems by the symbolist Belgian writer Albert Giraud and written in ‘Sprechstimme style’, half spoken, half sung” – the Da Capo Chamber Players “demonstrated equal commitment in revealing the astringent, entrancing elements of the work, which reflects the Berlin cabaret tradition.” 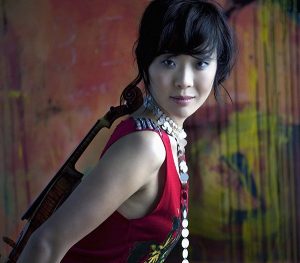 Can’t wait for this? Then visit Club Sudakoff on October 1 to hear pianist Kathleen Supové, violinist Jennifer Choi and guitarist James Moore perform a variety of solo, duo and trio works by today’s contemporary composers – John Zorn, Vijay Iyer (winner in 2012 of the Hermitage’s Greenfield Prize and who performed in Easthampton, MA on September 27), and others. You may think you don’t know Ms. Choi, but she has been a member of the Miró String Quartet, the Chamber Music Society of Lincoln Center and ETHYL – all of which have performed here in Sarasota numerous times. Ms. Supové, piano, has performed at New College New Music five times in the last 15 years. Sharp notes are her speciality. James Moore, on guitar, rounds out the trio.

If you have your calendar handy, fill in January 21 to hear, at the Sainer Pavilion, ensemble mise-en, a New York contemporary music collective formed in 2011. They are now based in Brooklyn (Brooklyn, while located within the geographic boundaries of New York is not necessarily always part of New York). The ensemble will be playing a five movement piano concerto by György Ligeti (yes, actually born in Transylvania) which starts in Vivace molto ritmico, goes through Vivace cantabile and ends in Presto luminoso, with stops in between in Lento e deserto and Allegro risoluto. The New York Times, this year, said that “Of all the 20th-century composers, György Ligeti may be the most empowering model for a new generation.”

All performances are at 8 p.m. with free artist conversations the previous Thursdays at 5 p.m. For information about tickets, venue locations, and more about the New Music New College program, go to New College’s web site – newmusicnewcollege.org/2016-2017.

Do you watch PBS Pledge Drives? 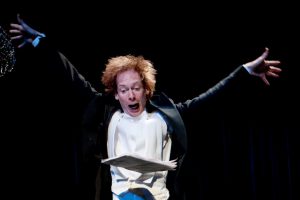 If so, you probably have seen (or even purchased) the complete works of Victor Borge. Well, what now? Go to the Ringling International Arts Festival and watch New Zealand’s Thomas Monckton, with the Finnish group Circo Aereo, who is the Victor Borge of the 21st century.

Want something completely different – how about a musical dance version (Choreographed by Doug Elkins) of Shakespeare’s Othello set to a Motown score? This is not pretty bodies toe dancing around in unison but a realistic (for ballet) story told in music and motion.

Like circus acrobats a la Cirque de Soleil but with a bit more of a twist? Then how about Gravity, a group from Australia that will be performing amidst the Ringling collection of historic circus wagons?

Do I dare suggest Matt Haimovitz, the Israeli cellist who is performing the six Bach cello suites along with overtures to those pieces, written by contemporary composers, spread over three dates?

In total there are seven different groups performing at the festival from two to four times each, between the 13th and 16th of October. There are also conversation sessions with the artists, an opening night celebration, late night jazz on Friday and Saturday, and a lounging area where you can eat, drink and rest between shows while listening to some hot and cool musicians – Hot Club of SRQ, Combo Vimana and ZEN Seraphine. Plus there are ticket discounts for Ringling Museum members or just for buying multiple tickets. Purchase of a ticket also gives one free entry to the Ringling Museum of Art and the Circus Museum. More info at www.ringling.org/events/series/ringling-international-arts-festival.

Our monthly quiz – In what month is Oktoberfest?

October is a liquid month when beer flows freely in Bavaria (and everywhere else) and beer, wine and jazz flow freely in Sarasota. The Jazz Club of Sarasota has arranged for a Jazz Trolley to take you around to seven different music venues in Sarasota to hear many different types of jazz. One catches the trolley, initially at the north end of the Van Wezel parking lot starting at 5:30 p.m. and continuous until 10 p.m., on October 26, and then throughout Sarasota at the jazz venues. Just jump off at one of the various jazz spots, listen to some vibes and jump back on again to head for the next spot. 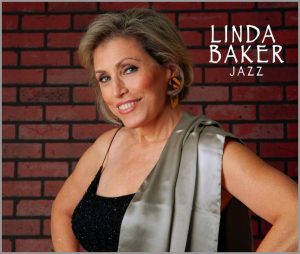 What goes up must come down – in this case it will be patrons of the Jazz Club of Sarasota’s Oktoberfest when they go upstairs at the Starlite Room at 1001 Cocoanut Avenue and come down pleased after hearing Debbie Keeton sing torch and other songs dating from the 1920s until now. Her credits include being the opening act for Blood, Sweat and Tears. Once back downstairs in the main room they can catch another group, Eddie Tobin on piano with Linda Baker on vocals. Mr. Tobin was music director and pianist for Engelbert Humperdinck for over seven years and plays in many styles – Ray Charles among others. Ms. Baker has a cool sound (a crisp, un-languid Julie London) which is clear and eminently listenable. Back on and off the trolley and take a listen to Al Hixon, his drums and his band. Al normally plays Mondays at 15 South on St. Armands so that leaves him free to bring his group to Ristorante Salute! at 23 N. Lemon for the Jazz Club Oktoberfest. A few blocks north at 428 N. Lemon you can catch Matt Bokulic and his fine piano. Matt has worked with big groups like the Nelson Riddle Orchestra and with trios and quartets with Jack Brokensha and John Laporta. Lots of styles melded into a style all his own.

A must trolley stop is 1525 4th Street. David Pruyn’s group (with some mean Sinatra vocal sounds) is at Servando. At the same address is the Blue Rooster featuring Synia Carroll (hear her new CD Here’s To You) backed by Billy Marcus on piano (also on the CD). For tickets and more information about the Sarasota Jazz Club Oktoberfest call 941 366-1552 or visit www.JazzClubSarasota.org.