The Hurricane that missed Sarasota

Hurricane season is June – November, and October is one of the season’s peak months. The areas affected include the Atlantic Ocean, Caribbean Sea and Gulf of Mexico. The storms usually form off the southern edge of Africa and are driven west as far as the coast of Mexico, although most swing north before that. Some turn and move up the east coast of Florida while others wait a bit and wreak havoc up our side of the peninsula.

Hurricane Joaquin, in 2015, was never slated to come near the Gulf of Mexico as it had formed much further north near the Canary Islands and was moving southwest when it hooked north upon reaching the Bahamas. While it had only become a tropical storm on September 30th, within two days it became a major hurricane when it came into contact with the forty year old cargo ship, El Faro. That ship lost power and began leaking as it neared the eye of the now category 3 hurricane. While the El Faro started and ended its life ferrying cargo between the US mainland and Puerto Rico, it had transported over 73,000 tons of supplies between California and Kuwait during the first invasion of Iraq between 2003 and 2005. Its weekly voyage that should have been a typical Jacksonville to San Juan round-trip journey, became its last; a tragedy for those living in the greater Jacksonville area, home to many crew members. 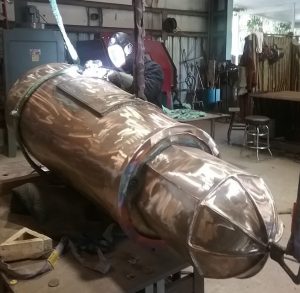 At the one year anniversary of its sinking, a park, one of the last points of land in Jacksonville that crew members may have seen, was renamed the El Faro Memorial at Dames Point Park. It is also now home to a memorial statue commemorating those that lost their lives, the El Faro 33. That statue, shaped like a lighthouse (El Faro means The Lighthouse in Spanish), with its bright beacon, seems to cast a light straight towards Puerto Rico. In March it will be joined by a sister memorial lighthouse in San Juan harbor, beaming its light at 47º NNW back towards Jacksonville. A walkway at the Jacksonville memorial will be lined with 33 plaques, each with the name of an El Faro crew member along with a message – such as You Are Loved Beyond Words And Missed Beyond Measure and Your Wings Were Ready But My Heart Was Not – written by a surviving loved one, adorning each plaque.

Tote Maritime, which owned the El Faro, commissioned Bronzart, Sarasota’s own foundry, to construct the statures and cast the plaques, all designed by St. Augustine’s sculptor, Chad Light. The 8’ 2” tall replicas of a lighthouse are small relative to some of the statues and art pieces done at Bronzart. They have done human size works by Sarasota’s Jack Dowd and larger works by the artist Robert Rauschenberg (basically replicating, in bronze, an assemblage in wood, by making molds of the original in order to make an exact replica, down to the grain in the wood). In the case of the lighthouses, they took a foam model, made a mold, poured in molten steel, detailed it to perfection, and added a rich bronze patina.

The craftsmen at Bronzart can take a small work of art, perhaps the head of a child, and, through scanning and computer imaging, scale it up to the desired size. Indeed, going to Bronzartfoundry.com/projects/ is like going to an art gallery or sculpture garden from the convenience of one’s own home.

France – and where to find it

Sure, France is over there, but some French things we love are over here. If it’s wine and cheeses you crave, you probably already know where to find them. But French music? Well, it is scattered all about during Sarasota’s French Cultural Festival – thru March 24th. A good place to start might be with a combination of wine, cheese and song with the Belle Canto singers at Michael’s On East on March 16th at 11:00 a.m. The singing comes first, followed by lunch. Under the aegis of the Sarasota Artist Series, this A Cappella group will be performing selections by Debussy, Ravel and Porter. While Porter was not French, he did write the song I Love Paris, which makes him legit. Want music with your songs? Try the seven-piece La Vie en Rose Band with the French singer Violette. This Artist Series concert will include American standards, French Jazz and a tribute to Edith Piaf on March 19th at the Venice Performing Arts Center. 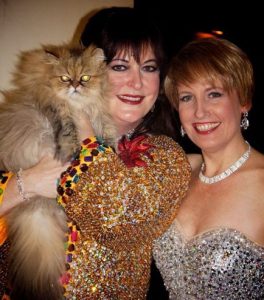 And speaking of the Artist Series (but not things French), Liz Callaway, who will be here singing with the Sarasota Orchestra (see below), and her sister, Ann Hampton Callaway, will be singing together at Church of the Palms on March 26th. Alex Rybeck will accompany them on piano. For these, and more about French music, lectures and food during March, go to www.artistseriesconcerts.org. And, if you like Duruflé’s Requiem and Poulenc’s Gloria, you can hear them both, March 5th, with choral artists Gloria Musicae – more info at www.gloriamusicae.org.

The Sarasota Orchestra, with over 70 musicians, can make a lot of noise. That is one reason why you don’t see them all on stage all the time. Only musicians that are needed for a particular piece are on view when that piece is performed. A Rachmaninoff or Shostakovich symphony, with their tremendous variety of color, volume, scope and tone will require more musicians on stage than a Chopin concerto. The orchestra’s playlist is also as varied, from classical works by Mahler to Broadway tunes by Richard Rodgers (of Rodgers and Hammerstein).

One reason that theater-goers attend Broadway musicals is that they love each show’s top songs. But why go to a dozen Broadway shows (and pay a few thousand dollars for the privilege) when you can hear our orchestra play each show’s top song with top Broadway singers like Susan Egan, Liz Callaway and Deedee Magno Hall. And if you like the light touch but just not Broadway, the orchestra’s handling of Copland, Mancini, Gershwin and John Philip Sousa would be just the thing. Of course, if it really is Mahler that tickles your fancy, then his Symphony No. 1 (the Titan) along with works by Bernstein, Tchaikovsky, Rossini, Beethoven and Mendelssohn might just be your cup (or cups) of tea. All of these pieces are played during the month of March as part of the orchestra’s Masterworks, Pops and Great Escapes series. 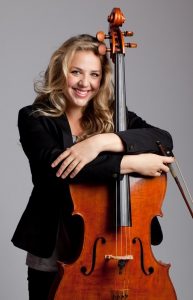 When is an orchestra not an orchestra? When some of its members get together as a string quartet. And that is exactly what Christopher Takeda and Daniel Jordan, violins, Steven Laraia, viola and Natalie Helm, cello do when they play string quartets by Dvorák and Shostakovich. These quartet pieces are gems that are best appreciated up close – which is why they are performed in Holly Hall where everyone can get up close and personal. Dvorák wrote 14 string quartets and the one they are performing is the 14th, his last. A rather fitting way to end this season’s Sarasota Orchestra chamber series. Dates and times for March and April’s remaining orchestra and chamber performances may be viewed at www.sarasotaorchestra.org/concerts.

THE DRAMATIC WORLD OF JACK GILHOOLEY