“The Ocean at the End of the Lane” by Neil Gaiman 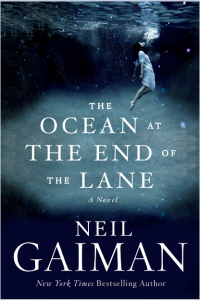 Your mother loves to reminisce.

“Remember when…” she says before launching into some often-embarrassing story about something that happened years ago. “Remember when,” two words that make you scramble to recall whatever she’s talking about.

Sometimes, though, you can’t remember when. Her stories are familiar – but they aren’t, and you almost wonder if they ever really happened. Likewise, in the new novel, “The Ocean at the End of the Lane” by Neil Gaiman, a middle-aged man on his way to a funeral learns that Memory Lane has a dead-end.

He hadn’t meant to drive there.

He hadn’t really even known what he was looking for – nothing, probably, other than to see what had changed in his old neighborhood. It would be a nice departure from funeral conversation, a head-clearing side-trip, but he somehow ended up at Hempstock Farm. Up ‘til then, he’d nearly forgotten about the place.

As he walked down to the farm’s pond, memories came flooding back to him.

Lettie Hempstock (he hadn’t thought about her in years!) had once told him that the pond was really an ocean, and he’d believed her. He was seven years old that summer; she was eleven and she promised that she would keep him safe.

But, of course, she couldn’t.

It wasn’t her fault that he’d insisted on going with her to the back of her Grandmother’s property, where the wind howled and a gray thing spoke to Lettie in a most improper manner. It wasn’t her fault, either, that the gray thing threw something to him and he caught it, even though Lettie made him promise to hold her hand tight.

He never blamed anyone but himself for the appearance of Ursula Monkton.

When his mother found a job, Ursula Monkton moved into his old room. Ursula Monkton was supposedly a housekeeper-babysitter, but she wasn’t the nice girl his parents thought she was. She was evil, she knew all his thoughts and plans, and she terrified him. But Lettie would know what to do about that.

Misty. That was the first word that comes to mind as I reflect on reading “The Ocean at the End of the Lane.”  The narrator of this short novel seems to be oddly peering at the past through doddering confusion, as if something’s foggily off-center but he can’t exactly determine what it might be.

Odder still is that author Neil Gaiman doesn’t turn up the heat anytime quick – which is, I think, where the brilliance of this book lies. No, Gaiman lets his narrator share his memories with curious incredulousness and incredible calm. That allows the story to wash over readers, to overwhelm us slowly and deliciously. We’re invited into the mist, too, and it’s a squirmy thing.

For readers new to this author, consider this: if Ray Bradbury and Shirley Jackson had a love-child, it would be Neil Gaiman.  If you’re a fan, you know that already – and you know that “The Ocean at the End of the Lane” is a book you’ll remember.