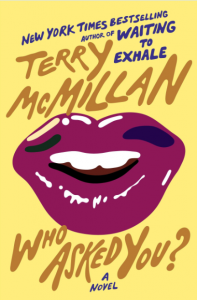 You can’t fix everything.

That’s a hard lesson to learn, no matter who you are. You can’t swoop in and make things right when they’re not yours to correct. You can’t throw money at something to make it go away, there are some issues that can’t be mended, and you surely can’t fix stupid.
You can, however, try to lessen the impact of life gone wrong – and in the new book “Who Asked You?” by Terry McMillan, you can also remember that potential fixes might take awhile.

Betty Jean had her hands full.

Her husband, Lee David, had dementia and spent his days watching TV in the bedroom and sleeping. It wasn’t his fault but those days, Betty Jean could barely remember why she ever loved him.

Their children might as well have had brain problems, too: Dexter was in prison; Quentin had distanced himself from the ‘hood as soon as he was able; and daughter Trinetta was an addict with two little boys that seemed to be at Betty Jean’s house more than they were at their own.

To say that Betty Jean was overwhelmed was an understatement, although she had some help. Her next door neighbor and best friend, Tammy, was always able to pitch in and Betty Jean had hired Nurse Kim to help with Lee David. Those two women were a lot of comfort, which was good – because Betty Jean’s sisters, Venetia and Arlene, were worthless in that department. Venetia couldn’t leave her church out of any conversation and Arlene was just a nasty woman, overall.

Yep, Betty Jean often felt like she was running in place – a feeling made worse when Trinetta left her kids with her mother and disappeared. Raising two young kids wasn’t what Betty Jean wanted, but Luther and Ricky didn’t ask for it, either.
Yet somehow, they’d manage. They were family, after all, and that’s what family did: they ignored bad blood and bad advice, gossiped about one another, did what needed doing, circled wagons, and muddled through.

Fixing life, and everybody’s problems, wouldn’t be easy – but then, what was?

Right away, from Page One, you know that “Who Asked You?” is going to be a lot of fun to read. Betty Jean is a woman with keen sarcasm, not quite beaten down by life – but close! – yet still managing to keep a fingernail-hold on a sense of humor.

She’s the best of author Terry McMillan’s signature-cast of strong women characters, but Betty Jean’s not the only. Each woman here is a great surprise, from Nurse Kim to the Social Worker who makes a cameo, but very important, appearance. Not to be ignored, the men in this book round out the story perfectly. I found plenty of burst-out-laughing moments here, some I-didn’t-see-that-coming gasps, and I loved it.

If you’re looking for a little escape this weekend, or confirmation that your life isn’t so bad after all, then here’s the novel you want. “Who Asked You?” is fun, and it’s a book you should be fixin’ to read.