Your dog just can’t get enough of “catch.” 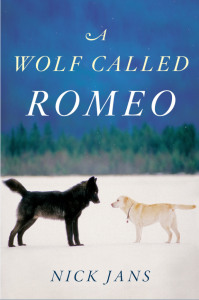 Yes, he has plenty of toys, and just picking one up incites a glint-eyed round of the game. Nothing, apparently, is better than snatching something from the air. He’d play til he dropped, if you’d let him.

Some dogs love a ball. Some dogs love squeaky-toys, while others crave complicated playthings. And in the new book “A Wolf Called Romeo” by Nick Jans, some dogs have unusual playmates, too.

Nick Jans was astounded at the size of the pawprints.

They weren’t ordinary, dog-sized prints; these were huge, indicative of a wolf prowling near the city limits of Juneau , Alaska . It was a late afternoon in December 2003 and, though most residents of the Last Frontier “spend a lifetime” without ever spotting a wolf, here one was, almost teasing Jans with its bold presence.

Days later, while walking their dogs, Jans and his wife encountered the wolf. He was full-coated, black, in the prime of his life, tipping the scales near 120 pounds – and before they could stop her, their Lab, Dakotah, dashed out to meet him, and to play. The wolf seemed smitten with the yellow (spayed) dog, a puppy-love that ultimately gave him his name. Though the Janses tried to keep Romeo under wraps, other dog owners also noted throughout that winter that the wolf interacted happily with their pets, too.

From a handful of neighbors, Romeo’s fan club grew. When he returned for a second, then a third winter to the edge of Juneau , so did people who enjoyed his friendliness but often disregarded that he was still a wild animal. That made some Juneauites clamor for the wolf’s removal. Others, believing him a danger, wanted Romeo dead.

But, as Jans noted, fatal wolf attacks are extremely rare. “You have to be… unlucky – right up there with being struck dead by a piece of space junk – to be killed by a wolf.”  And so Romeo stayed because “there was no basis for action unless something actually happened. And then it did.”

There’ll be two camps that will read this review: those who love wolves and the natural history behind them, and those who think they’re varmints and want them eradicated. “A Wolf Called Romeo” is for the former type of reader.

And yet, author Nick Jans offers his readers balance: in his basic overview of Canis lupus, he admits that attacks happen and that the presence of a wolf can be problematic; indeed, Romeo reverted to his natural behavior more than once, and may have killed a pet dog or two. Still, what happened to him, the controversy that swirled around him, and the aftermath of his unfortunate death are things that no self-respecting animal lover will want to miss.

In addition to the wolfish tale here, I also enjoyed the travelogue that’s inherent in a story like this. I think that if you love wildlife, if you love nature, or you enjoy spending time outdoors, then “A Wolf Called Romeo” is a book to catch.

The World of Bix Mannion

Arts on the Horizon: August