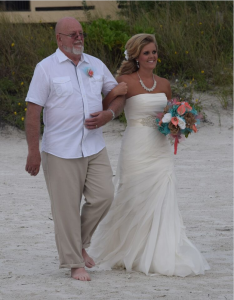 exchanged vows surrounded by family and close friends, at an intimate wedding ceremony held on the magnificent Siesta Key shoreline in front of Tropical Beach Resorts. 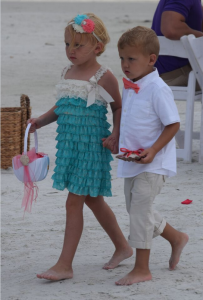 Audra, a Registered Nurse at Russell County Hospital and Sam, a welder for Caldwell Tanking (builds water towers), met when Audra was in nursing school in Somerset Kentucky, where Sam was living at the time. One of her nursing school classmates introduced them. Their first date was rather unique. They went out on Lake Cumberland on Audra's boat. "He thought it was the coolest thing for a girl to own her own boat. He asked me out on another date, but I wasn't interested. He was too quiet for me," she said. "So for about 3-4 months he "chased" after me." Audra finally caved in and they went on their 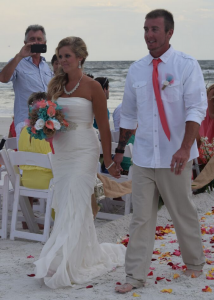 "He was much more energetic and confident." They shared a New Years kiss and the rest, as they say, is history.

A mid-December carriage ride outside the Opryland Hotel in Nashville, TN set the stage for a memory that will forever be etched in Audra's heart. "Sam rented a horse carriage ride and was a nervous wreck. He had the ring in his hand and I tried holding his hand and he told me to "get off his hand". He asked the driver how long it would last. I couldn't help but wonder what his deal was, he acted miserable. Right about that time he got down on his knee in the carriage and proposed."

As they were deciding where to get married, they knew they wanted to get married on a beach somewhere they had never been. They decided on Siesta Key after watching the travel Channel. The segment featured the beach on Siesta Key and mentioned it had been named the number one beach in the United States.

The day after the wedding this amazing couple began their exciting honeymoon. They embarked on a Carnival Cruise which would take them to Aruba, Dominican Republic, Grand Turk, and Curacao.