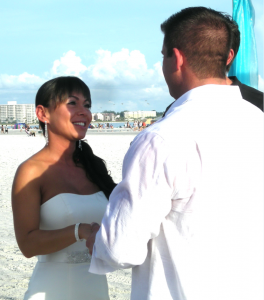 A light gulf breeze and powdery white sand set the stage for another breathtaking Siesta Beach wedding.
Julieth Mazo of Medellin, Colombia and Jarrod Gelling of California, exchanged vows surrounded by family, and close friends at an intimate wedding ceremony held on stunning Siesta Beach recently. Even some of Julieth’s family in Columbia were able to enjoy the ceremony simulcasted live on FaceTime.Asked about when they first met Julieth replied, “We meet at the gym, “Fitness for 10″, in Brandon Fl, where he goes every day and I go once a month…lol.” 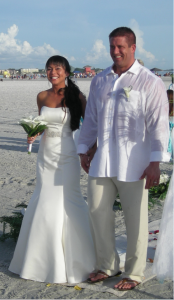 Their memorable first kiss came in the parking lot of a movie theater in Ybor City after seeing the movie “Sherlock Holmes” on their first date. Just a couple months later they knew they were in love. They were enjoying a jacuzzi, when they both said “I love you” at the same time.Julieth recalled the day she realized he was the one. “He said: “I love you” and I said: “I love you more” and he got mad because he said that is not possible.” The deal sealer came for Jarrod when he realized how big her heart was and how much she supported him in anything he did.Jarrod decided to go public with his marriage proposal by asking Julieth to marry him in front of 300 tourists on the top of the Empire State Building earlier this year.Both are budding entrepreneurs. Julieth has an online retail business and

Jarrod owns Southern Muscle Sports Nutrition store. In addition to Jarrod’s retail success, he recently finished fourth in the nation in the Mr. Universe competition.After their wedding and a few days in Sarasota, they’ll begin the next chapter of their exciting lives together by moving into a new house in Tampa. They’re delaying their honeymoon until this winter when they’ll spend it skiing in Colorado.Choosing Siesta Beach for their wedding was a no-brainer. They often spend time on the beach here and agree with most Americans it’s the best beach in the United States. 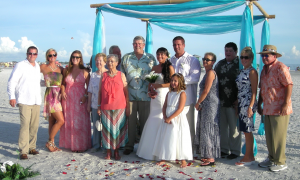