Siesta Key oldest island in region, thanks to Point of Rocks 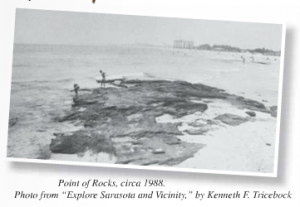 Historically, it appears, the island has had the top spot of beaches in Southwest Florida for about 4300 years.

A 2003 report by University of South Florida scientists indicate that, based on analysis of Point of Rocks near Crescent Beach, “these beach deposits were in place at least 1800 years ago and might have been there as long ago as 4300 years ago. “This means that some type of barrier island was in place at that time.”  The report quotes another coastal geologist who wrote that the information “shows that Siesta Key is one of the oldest barrier islands … along the west-central Florida coast."  The study, “Formation of ‘Beach Rock’ at Siesta Key, Florida, and its influence on barrier island development,” was written by Darren Spurgeon, Richard A. Davis Jr., and Eugene A. Shinnu.
Siesta Key beachgoers are familiar with Point of Rocks, a unique beachrock outcrop that juts into the Gulf of Mexico for a little more than a half-mile along the shore. Much of the rock is above the water at low tide, allowing for an up-close exploration of the intertidal zone inhabited by crabs, little fish, starfish, and other critters.

Exactly why Point of Rocks exists, and why it is here it is, has always been up in the air. The team admits that question, and doesn’t really explain why the rocks are  only found there at that one location.
“Most of the proposed theories on beachrock cementation have strong supporting evidence making it impossible to attribute all beachrock to a single process,” they wrote.

The USF scientists submitted samples taken from Point of Rocks to a barrage of tests. They also studied other elements found in the vicinity. Their conclusions?  “Without question, the island immediately landward of the present beachrock exposure is not the paleo-island or the portion of the present island … this means that an older barrier occupied this site and was removed prior to the accumulation of sediments that constitute the landward, present barrier.”

The team continues that further data collected “… implies that an island of considerable size (once) existed … an island seaward and perhaps much larger than the one present today.”  In other words, islands now known as Siesta Key have evolved over time both east and west of Point of Rocks.

Rising sea level is one of the looming threats to all barrier island residents — actually, it’s a threat to all people living near the water in Florida.

A little history, from “1992 Framework For Action” by the Sarasota Bay Estuary Program.

“During the last ice age (18,000 years ago) temperatures averaged 41 degrees colder than today, and sea level was 328 feet lower. The Florida Gulf Coast was located 80-100 miles west of what is now the mouth of Tampa Bay, and the climate in Florida was described as similar to the present climate in North Carolina.

What is happening today is a bit different.

“Atmospheric loading of greenhouse gases is expected to increase global temperatures and accelerate rising sea levels to rates greater than those in normal climatic cycles.”

Greenhouse gases are the fossil fuels that spew from our cars, truck, power plants, lawn mowers and anything else than takes gasoline or coal.

Sarasota Bay may expect water levels 14 inches higher than today in 2065, and 25 inches higher in 2115, according to data accumulated by Mote Marine Laboratory.

Looking back, the Point of Rocks team found that “sea level must have been very close to its present position at least 2000 years from present.”

What will happen 2000 years from now, of course, is uncertain to say the least.