A new look for the holiday season

Just in time for the holidays, Siesta Village will be getting new banners with a seasonal theme, Siesta Key Village Association (SKVA) President Wendall Jacobsen reported during the Nov. 1 meeting.

The project has been underway for months, he said. Kathy Elliott of Signarama is handling the project for the SKVA, board member Russell Matthes noted, adding that the firm “gave us an outstanding price.” “We’re excited about it,” Jacobsen said.

And with preparations long underway for the Village’s traditional holiday kickoff — Light Up the Village, set for Nov. 26 — SKVA Vice President Mark Smith realized during the SKVA meeting that he still needed to get a permit for the parade. “That’s in the works,” Lt. Donny Kennard of the Sarasota County Sheriff’s Office told Smith with a smile. “I don’t want Santa getting pulled over,” Smith responded. “It’s bad press for everyone.”

On one final note regarding the new banners, Sarasota County Commission Chair Alan Maio — a guest at the meeting — asked how much the banners cost. After Matthes told him they will be approximately $50 each, Maio replied that he would like to buy one to hang in his office. “You want the whole light pole?” Smith asked Maio, eliciting laughter.

“Sure,” Maio replied. And speaking of the light poles from which the banners hang: Michael Shay, the SKVA liaison to the Siesta Key Village Maintenance Corp. — which pays for the Village upkeep — pointed out that the pole in front of the former 7-Eleven has been missing a banner. He asked Matthes to add one more to the count.

A slowdown for sidewalks

Having been among those folks driving along Higel Avenue early on the morning of Nov. 1, I could not help but notice someone had put out traffic cones near the big house being constructed on the waterway, just north of the Higel/Midnight Pass Road intersection. Additionally, signs facing southbound drivers on Higel warned that traffic would be narrowed to one lane.

Fortunately, I made it to the 8:30 a.m. Siesta Key Village Association meeting in a timely fashion. However, following that session and some checking of various and sundry news-related matters, I found myself in line behind three other vehicles headed northbound toward the mainland. The green light we were staring at on the traffic signal might as well have been an illusion. Finally, the lead northbound vehicle and then the one behind it turned right onto Midnight Pass Road. As I peered around the car that was still in front of me, all I could see was that the southbound traffic on Higel was not blocked, but it showed no signs of preparing to move soon. Vehicles also were starting to stack on Midnight Pass Road, as their turn onto northbound Higel was blocked.

I was lucky to be able to “escape” onto Midnight Pass Road, too, and head off the south end of the island.

After a source later suggested that the Florida Department of Transportation (FDOT) was working on the sidewalks in that vicinity, SNL checked with FDOT District One spokesman Robin Stublen in Bartow, who said no documents he had on file for Sarasota County showed such a project on north Siesta Key.

About 20 minutes later, county spokesman Drew Winchester sent the SNL an email. “[O]ur capital projects division manager checked with FDOT regarding your inquiry,” he wrote, “and received the following” from a maintenance manager for the department in Bradenton: “[W]e have had a contractor doing sidewalk work on Siesta.”

SNL contacted FDOT Robin Stublen again the next day to follow up on that, providing him the name of the FDOT manager in Manatee County who had communicated with county staff. It turns out the sidewalk project began on Oct. 4. Stublen said it was completed on the morning of Nov. 2. He provided the official press release, which, SNL inferred, had not been filed appropriately in Stublen’s records.

Officially, the sidewalk repair project was scheduled between Higel Avenue and Beach Road, the release says. “Pedestrians can expect some nighttime sidewalk closures, and detours will be in place during repairs,” the release added. The release also advised motorists to use caution in the work zone, but it did not say they might be faced with long delays. 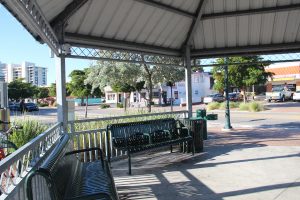 During his report to SKVA members on Nov. 1, Michael Shay — the Maintenance Corp. liaison — pointed out that new arms had been installed on the benches in the Village gazebo “that would not be that visible from the street.”

Regular readers will recall that SKVA members were fretful about tourism after several homeless individuals began sleeping in the gazebo in August. Thanks to efforts by the Sheriff’s Office to make certain the homeless people knew what types of assistance was available to them, the problem ceased.

However, during the August SKVA meeting, Shay and Vice President Smith — a leader of the Maintenance Corp. — talked of the possibility of discouraging sleeping on the benches by adding the arms.

As for the rest of his report: Everything with Buccaneer Landscape Management — which handles the Village upkeep under contract with Sarasota County — has been going smoothly, Shay said.

On one other note, Shay did mention that the Maintenance Corp. needs to decide whether to plant another palm in place of the one destroyed in the traffic island just south of the Village in August. A driver who suddenly sped up and plowed into that island with her BMW destroyed signs, tore the tree in half and damaged the plantings.

“It’s recovered pretty nicely,” Lisa Cece, special district coordinator for the county who supervises Village maintenance issues, pointed out. However, she added, it was up to the Maintenance Corp. to decide whether it wanted to make any changes. The island is almost directly across from Beach Access 5.

As the past president of the Siesta Key Association (SKA), Michael Shay also has been the steward of a project to warn drivers about the intersection of Ocean Boulevard and Givens Street on a curve just north of Siesta Village.

After Shay worked with county staff to get flashing beacons installed for both northbound and southbound traffic, he encountered a couple of glitches. First, a dead battery in the northbound beacon had to be replaced. Then Shay noticed another issue.

On Oct. 19, he emailed county staff — pointing out right away that he was not trying to be a pain in, well, a certain part of their anatomies. Nonetheless, he continued, “Driving northbound out of the Village this morning at 0845, [he saw] the blinking beacon does not come into the driver’s line of sight until just 5 car lengths before the sign. Kinda think that some tree cutting on that stretch of Ocean Blvd is necessary. Comments please….thanks much….mts”

A county staffer, Mark Richmond, agreed, adding that he had driven that stretch himself a few days earlier. Trimming would be taking place soon, Richmond added. When this reporter drove along Ocean Boulevard on the morning of Nov. 1 — to and from the SKVA meeting — both beacons were flashing. Shay informed me, he has been most appreciative of the fast county responses.

A reader notified the Siesta Sand recently that she was concerned about plantings she had seen on North Shell Road, near the beach access. She was afraid a private property owner was encroaching on public property.

After this reporter relayed her concerns to the county, spokesman Drew Winchester reported on Oct. 18 that staff had visited the beach access that day to inspect the situation. Winchester added, “[I]t was determined the recent improvements are not within the limits of the county right-of-way, per Mark Loveridge.”

During his November report to SKVA members, Sgt. Jason Mruczek said he knew of “no real crime trends or problems around here.” Mruczek did introduce a deputy who will be moving to the day shift after several years of working nights on the Key: Mike Schermock. “I hope you kept your sunglasses,” SKVA Vice President Mark Smith told Schermock. “I have ’em,” Schermock readily replied.

The Final SKVA General Meeting and Happy Hour will be held at the Daiquiri Deck Raw Bar on Wednesday, December 7 from 6-9 P.M.  We would like to thank all active SKVA members for the last 30+ years of support and involvement. If you are in current good standing with the SK Village Association, please join us for a few hours of friendship and appreciation.

New county ordinance governing mangrove trimming and protection in effect as of Nov. 1