The new tenant of the former 7-Eleven store on Ocean Boulevard is expected to be the Key West Sandal Factory, SNL has learned. “They’ve been an institution in Key West,” Jim Syprett — who co-owns the property at 5232 Ocean Blvd. — said of the company in an interview with SNL on June 14. “I think it’s really neat to have a good retailer,” he added. Syprett and his business partner, Jay Lancer, bought the former convenience store property for $1.6 million in January. Syprett and Lancer have been working with Florida Power & Light about the relocation of two transformers in preparation for the construction of an addition to the building. Everything should be finalized shortly, Syprett said, so the formal lease signing can proceed. “We’re trucking along.”

Syprett pointed out that Siesta Village has only one other shoe store — Comfort Shoes Siesta Key in Davidson Plaza — although some shops do sell shoes in a mix of offerings. “Shoe stores don’t seem to compete with each other,” he continued, noting that a mall may have half a dozen such businesses. That just creates more of a selection, he said.

The Key West Sandal Factory is known for the quality of its offerings, Syprett noted, and it will fit in perfectly in the Village. Referring to the maxim, “A proper mix of restaurants and retail serves the best interests [of the public],” he added, “I think that’s the absolute truth.”

The Key West Sandal Factory website says the business was established in 1932 “and is the oldest sandal factory in the US.” It says, “Key West Sandals can be seen on the streets, and beaches of the world as well as on the feet of countless celebrities.”

Syprett told SNL he feels the shop will be the perfect fit in the Siesta Beach setting. In an interview earlier this month, he said he is hopeful the business will be able to open its doors in early 2017. 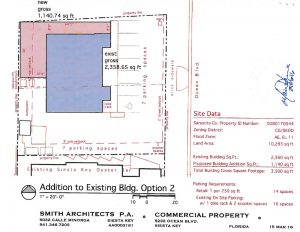 As for the addition to the existing building: County records show it will encompass about 1,140 square feet. The existing structure has 2,358.65 square feet.

The county’s Board of Zoning Appeals on May 11 approved a variance request from Syprett and Lancer so the new section could be built to the rear property line.

The last new retail construction in the Village also was a Syprett/Lancer project: Gidget’s Coastal Provisions, which opened on March 24, 2014 on the site where Napoli’s Italian Restaurant previously stood. With Siesta architect Mark Smith in charge of the design, only a portion of the original structure remained in Gidget’s building.

Smith also is the architect for the addition to the former 7-Eleven structure.

Another new restaurant slated in Village

At the time of press, Mike Granthon, managing partner of the now vacant building, located at 149 Avenida Messina said they do not have a specific business scheduled to lease the site at this time.  Although no final decision has been made, Granthon and business partner Chris Brown are contemplating opening up a high-end steak and seafood restaurant with an extensive wine menu.

Granthon acknowledged the close proximity this site has to the residential neighborhood so plans to keep the restaurant low-key; without live entertainment or late night hours.

Siesta Key Hardware & Garden store in the Village to close

After 10 years of serving the Siesta Key community, Jim and Patricia Hiller, owners of Siesta Key Hardware, located in the Village will be closing down the business to enjoy retirement.  Their last day will be July 31.

Morton’s Siesta Market will be leasing the space that is currently occupied by the hardware store when their lease begins on September 1.  Although Todd Morton hasn’t made a final decision on how he will proceed with the space, he’s confident he will have a better idea closer to the September 1 date.  “For now the space will stay separate; however, it will no longer be a full-service hardware store,” said Morton. In the meantime, he does plan on carrying some convenience houseware and hardware items.

New treats at the Daiquiri Deck

Most of the Daiquiri Deck selections “are free of high fructose corn syrup and only use pure cane sugar as a sweetener,” a news release says. “They utilize fresh frozen fruits and avoid unhealthy preservatives [while incorporating] high quality liqueurs and liquor. All batches are made fresh daily at their locations.”

The release further notes that four varieties of frozen dessert drinks (smoothies) will be available for children, with dairy and non-dairy options, as well. “All selections are gluten free,” the release points out, adding, “Adult beverages will also be offered with a choice of pop flavors.”

No SKVA meeting held in June

And speaking of Tropical Storm Colin: It played enough havoc with the weather — including a power outage — on Siesta the first week of the month that the Siesta Key Village Association officers and board decided to cancel their monthly meeting, which had been set for June 7.

SKVA meetings are held the first Tuesday of each month at the Daiquiri Deck Raw Bar. Meetings begin at 8:30 a.m. anyone interested in learning more about Siesta Key Village is encouraged to attend. For more information visit their website: www.siestakeyvillage.org.

Dredging Up the Past…