Story and photos by DEBBIE FLESSNER

In 2019, Saint Boniface Church, on Midnight Pass Road, will be celebrating its 65th year.

Back in 1954, Siesta Key was still relatively undeveloped, but it was clear to the one local Episcopal Church that a need existed for some new places of worship in the area. The Key was growing and seemed like a natural fit.

“At that time, Florida was experiencing a lot of post-World War II growth,” said St. Boniface Rector Wayne Farrell. “The Church of the Redeemer, the mother church downtown, spun off a lot of mission churches and we were one of them. When that happens, the larger church assists the smaller church with starting up and providing them with resources, which allows a ministry to serve more people.”

St. Boniface’s first services were held by Rev. Leon Bruijin in a storefront on Midnight Pass Road. Even though the average attendance at Sunday services was initially around 66 worshipers, there was enough interest for the church to apply for an official charter within the first four months of operation. 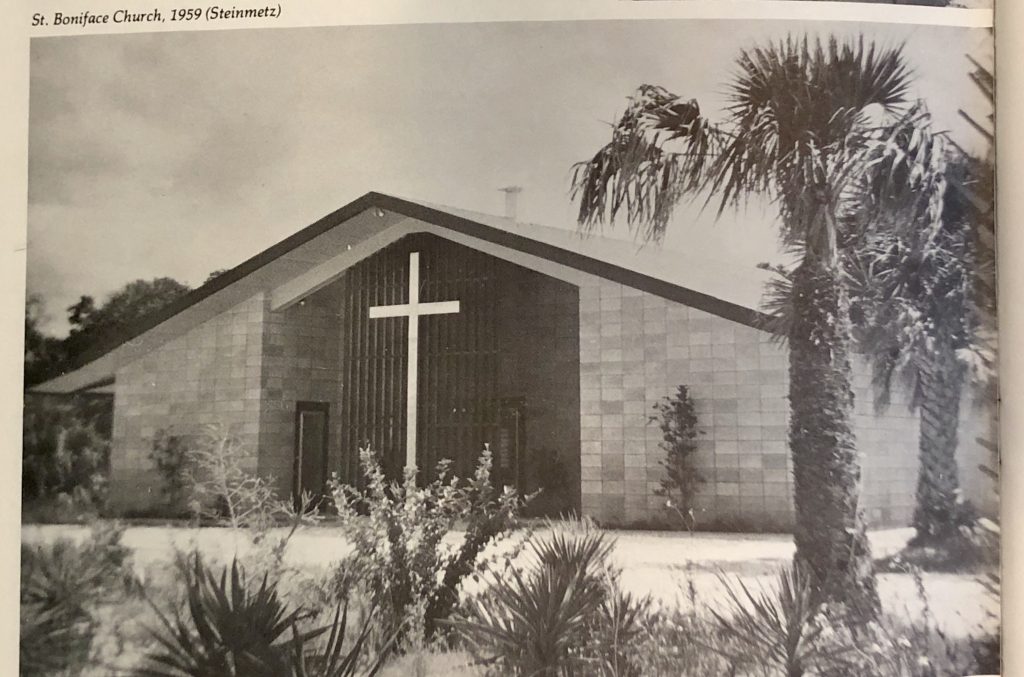 In March of 1956, the church purchased 4 ½ acres on Midnight Pass Road, where the current church now stands, for a price of $5,615. Fifty-six families who were members of the church pledged almost $40,000, which had been the building fund goal, and by the middle of 1957, the first building had been completed.

After achieving parish status in 1962, other buildings were added to St. Boniface, including classrooms, a parish hall, a nursery, a kitchen, an enlarged sacristy and a new building for the Healing Mission.

St. Boniface’s currently used church building was built in 1980 employing a hexagonal shape. The idea behind that configuration in sanctuaries is that the pews facing toward each other provides a more intimate setting and gives the feeling of a family drawing strength from one another.

Rev. Farrell, who became the Rector in October of 2016, says the setting speaks to the character of the church itself.

“We want a church where, when people come to it, they know that we can help them bring about God’s kingdom on earth,” he said. “We focus on respecting every human being through dignity, and we do it with love.”

Indeed, the Episcopal Church Foundation mission statement, as depicted in their “Book of Common Prayer,” is as follows: “To restore all people to unity with God and each other in Christ.” As such, St. Boniface also focuses on connecting with the Siesta Key community at large.

The sanctuary seats around 550 parishioners, and during tourist season can easily fill up for the two Sunday services. And from January through May, the church opens up its community center in the back to host a Friday Fish Fry that is open to the public. For only $12, attendees can get a fish dinner, drink, dessert and a lot of hospitality.

Rev. Farrell says that the church is also known throughout the area for their gift for praising God through music.

“Our choir is directed by the wonderful Dr. James Guyer, and we have a concert series throughout the year,” he said. “About 90 percent of them are free to the public. And we also have the Siesta Youth Chorale, which is open to all children from Pre-K to 5th grade—you don’t have to be a member here to participate.”

The St. Boniface Preschool was begun as an outreach ministry of the church in 1982 and is housed on the grounds of the church. They employ a child-centered, developmentally appropriate curriculum, focusing on activities that build social and emotional development. Though the children don’t need to be members of St. Boniface Church to go to school there, they do attend a weekly chapel led by Associate Rector Jonathan Evans and get to participate in the music program led by Dr. Guyer.

As for the future of the church, Rev. Farrell says that it, just as with everything St. Boniface does, will be approached through the lenses of the four pillars of their ministry: Worship, Teaching, Healing and Service.

“We want to continue to be the open and affirming congregation we’ve always been,” he said. “We want everyone to know that they’re a child of God and that they can live the life that God wants them to live.”

Saint Boniface Episcopal Church is located at 5615 Midnight Pass Road, on Siesta Key. For more information, and to find a list of services, visit the website at www.bonifacechurch.org or call 941-349-5616.

Volunteering. The healing power of friendship