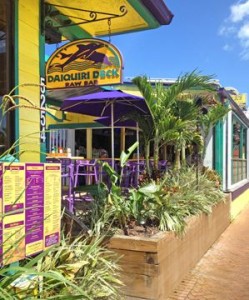 Mention Daiquiri Deck Raw Bar on Siesta Key and most will start talking about frozen drinks.

The Deck does have a seeming endless selection of frozen daiquiris, margaritas, coladas and other adult beverages. But don’t be blind sided by the drinks: the Siesta Village landmark also has an extensive a tasty menu selection.

Owners Matthew Grover, Russell Matthes, and Troy Syprett, along with Corporate Chef John Hentschl, have created a menu that includes everything from a raw bar to pizzas, seafood to beef, wraps to burgers, plus vegetarian dishes.

Daiquiri Deck Raw Bar lives up to its name with its raw bar. Oysters come from five locales: Blue Point in the Atlantic, Kumamoto from Japan, Apalachicola from the northern Gulf of Mexico, Deep Bay from off British Colombia, and Eagle Creek from the Pacific Ocean.

The shellfish are also available steamed or as Rockefeller, Casino, Mignonette, or Moscow — the latter served cold with sour cream, caviar and a splash of vodka. Prices for the special treats are $8.95 to $14.95, again depending on oyster origin.

There is also peel-and-eat shrimp ($9.75 for a half-pound), steamed mussels in tequila butter ($9.95) and a Raw Bar Medley of six Clams Casino, three Florida oysters, four shrimp, six mussels and a king crab leg in tequila butter for $16.95.

“Snacketizers” for starters of a meal at Daiquiri Deck include Gator Bites ($9.95) served with a Caribbean dipping sauce. Bahamian Conch Fritters ($8.95) is featured with its old-style recipe and is also served with Caribbean sauce. Slightly more exotic is Blackend Yellowtail Hamchi Tacos ($9.95) with lettuce, tomatoes, and chipotle sauce, or Pepper-Crusted Tuna pan-seared with green garnish, wasabi and soy ($10.95).

Highlight of the six salads is the Grilled Sirloin Steak Salad which, beside the spring salad mix, comes with Maytag bleu cheese, roma tomatoes, cucumbers, pepperoncini, red onions and grilled sirloin steak, all tossed in raspberry vinaigrette for $12.95.

Patrons seem to find the New England Style Lobster Wrap the most popular of the eight wraps offered at Daiquiri Deck. The chilled offering includes fresh Maine lobster tossed with dill mayonnaise and seasonings for $14.95. It is served wrapped in a warm flour tortilla with a side of fries or coleslaw.

The “Mainstays” selections of entrees run heavy on seafood. Popular is the Mixed Seafood Grill ($19.95) with fresh fish, scallops, and jumbo shrimp on a skewer. It may be ordered blackened or grilled and is served with mango salsa.

Catch of the Day, depending upon availability, may be mahi-mahi, tilapia, snapper, salmon, grouper, tuna, or lobster, prices range from $17.95 to market price.

Carnivores may enjoy the Flame-Broiled New York Strip ($23.95), 16 ounces of beef rubbed with herbs and spices and topped with homemade onion rings.

All Mainstays include soup or salad, seasonal vegetables and either fries, rice, coleslaw or roasted red potatoes.

What some have called a “life-changing experience” is the Key West Mahi Club ($11.95), a crispy mahi-mahi slab of fish served on toasted white bread with lettuce, tomato, bacon and pepper jack cheese.

There are also six fish sandwiches ranging in price from $9.95 to market price: mahi-mahi, tilapia, snapper, salmon, grouper, or tuna. The fish may be prepared grilled, fried, sautéed, blackened, pepper-crusted or jerked with myriad bread and cheese and served with a dill pickle and either fries or coleslaw.

Daiquiri Deck also has pizza. The 12-inch cheese pie is $9.95. Add up to three toppings for a buck more, or for $2 more you can have four-plus toppings.

But it’s the daiquiris of which Daiquiri Deck patrons sing the highest praise. Most popular of the dozen poured from the adult Slurpee machines is the Deck Diesel: an orange, grain alcohol, and vodka beverage topped with Diesel Fuel Grain Alcohol.

There are also frozen combinations with eclectic titles such as Gazoo, Smurf, Grim Reaper and a few names not suitable for a family publication. 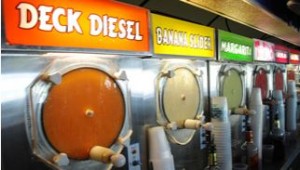 The Daiquiri Deck Raw Bar on Siesta Key has breakfast items served any time. Give the Breakfast Burrito ($9.95) a try with its scrambled eggs, chorizo sausage, green chilies, onions, cheddar and Monterey jack cheeses in a flour tortilla with sour cream. Fruit is served on the side. $9.95.

There is also a Daiquiri Deck on St. Armands Circle at 325 John Ringling Blvd., and a new restaurant under constructing at 304 W. Venice Ave., Venice.

Daiquiri Deck is more than just frozen drinks these days.

Island Visitor: What a Hoot it is to Scoot

A Taste of Germany has German food on Siesta Key