The Siesta Key Association (SKA) and Save Our Siesta Sand 2 (SOSS2) are using the recommendation of a state administrative law judge to ask the Florida Department of Environmental Protection (FDEP) to eliminate two areas of Big Sarasota Pass as potential dredging areas for the renourishment of South Lido Key.

In exceptions filed on May 23, the SKA and SOSS2 base their arguments on the May 8 recommended order issued by Judge Bram D.E. Canter regarding a December 2017 Florida Division of Administrative Hearings (DOAH) proceeding held mostly in Sarasota. Canter called for FDEP to modify the permit the U.S. Army Corps of Engineers (USACE) and the City of Sarasota have sought for the Lido project.

In the May 23 filing, SKA attorney Kent Safriet of Hopping Green & Sams in Tallahassee and SOSS2 attorney Martha M. Collins of the Collins Law Group in Tampa noted Canter’s recommendation that dredging be allowed only between April and September in proposed Borrow Area — or “Cut” — B and in a 1,200-foot segment of Borrow Area C. Canter cited a field investigation undertaken by R. Grant Gilmore Jr., president of the Vero Beach consulting firm Coastal and Ocean Science Inc. that showed the spotted sea trout spawns in those areas between April and September.

Canter noted that the trout’s spawning sites are not common, they are used repeatedly and “are important to the conservation of the species.” Therefore, unless FDEP were willing to modify the permit for the Lido Renourishment Project to accommodate the spawning, Canter wrote, “it is recommended that the proposed [FDEP] actions be DENIED [emphasis in the document].” 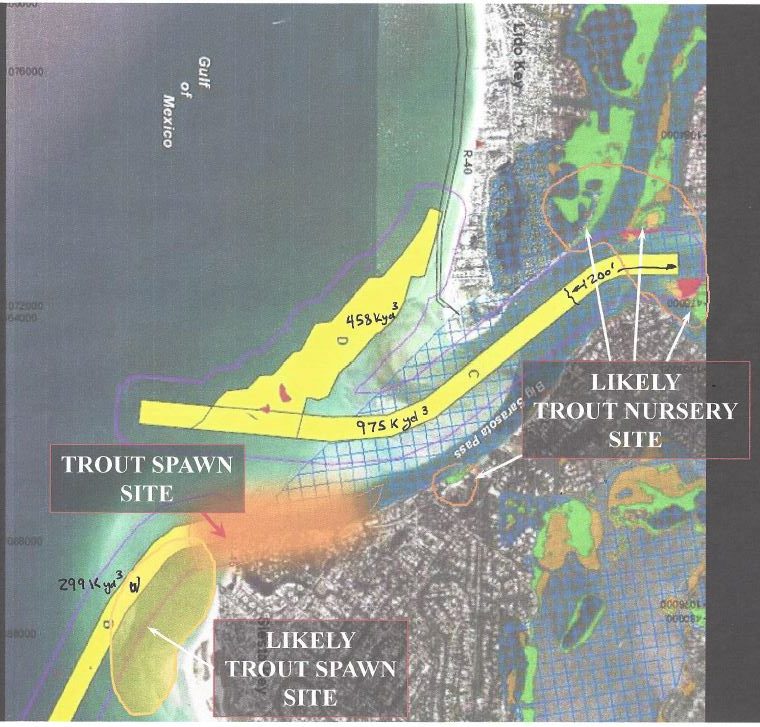 City Manager Tom Barwin stated that the city readily would agree to the permit modification.

Regarding Cut B, Safriet and Collins pointed out in their brief, “[L]imiting the dredging of a critical spawning area only to a time period when the spotted [sea trout] are not spawning does not protect and preserve the critical area for spawning in the future.”

Therefore, they continued, the easternmost 1,200 feet of Cut C also should be eliminated from the dredging plans.

Additionally, in his decision, Judge Canter referenced the December 2017 testimony of Robert Young, a Western Carolina University professor and director of the Program for the Study of Developed Shorelines. Canter recommended that no more than 1.3 million cubic yards of sand be removed from Big Pass, as Young had told the court that the FDEP permit actually would allow the dredging of up to 1.7 million cubic yards of sand.

The final decision on the issuance of the permit will rest with FDEP Secretary Noah Valenstein, City Attorney Robert Fournier has explained. First, though, the opposing parties in the case — including the city, the USACE and the Lido Key Residents Association — would have 10 days to file any objections to the exceptions, Fournier added in an email to the city commissioners.

“After this has happened, the Florida Department of Environmental Protection can be expected to enter a Final Order. That Final Order will be subject to appeal within thirty (30) days to the District Court of Appeal,” Fournier wrote.

After Canter issued his ruling, Peter van Roekens, chair of SOSS 2 said, “We’re grateful that the judge did acknowledge that there is a detrimental impact to the pass” if the dredging is undertaken during the sea trout spawning season.

Van Roekens added that if FDEP proceeds with plans to issue a modified permit, “we’ll go to federal court.”

He reiterated that remark during a May 16 update to members of the Siesta Key Chamber of Commerce.

In a separate telephone interview, Catherine Luckner, vice president of the SKA, said that nonprofit’s board remained firm on a point it has made in the past: The USACE should be required to undertake an in-depth Environmental Impact Statement (EIS) to prove that the Lido project would not cause any harm to the pass or Siesta Key. Although the Sarasota County Commission voted 5-0 in July 2016 — at the SKA’s request — to ask that the USACE undertake an EIS, the USACE declined to do so.

History: The Dangers of Dredging

The Spawning of Mote SEA