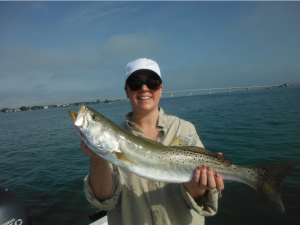 June will find Sarasota beaches lined with anglers in search of the ultimate gamefish, tarpon, especially early in the month.  Catching these giants is really not complicated.  Rig a 25 lb spinning outfit with 36” of 80lb flourocarbon leader and a 5/0 hook, then position the boat 100 yards off the beach and cast a live crab, pinfish, sardine, lure, or fly at any pod that presents itself.

One benefit of the popularity of tarpon fishing is that pressure in the bay will be light.  With many anglers “out on the beach” the bays are relatively un-pressured.  Bait will be plentiful, those proficient in cast-netting will have no problem filling their live-wells with frisky pilchards.  Once the well is filled, you can choose to anchor up on a likely spot or drift across a large flat.  Live shrimp is also deadly on most species, but as we move into summer the pinfish become more of a problem.  Anglers casting artificial baits will do well with scented soft plastics, Rapala X-Raps, and spoons.

The flats around both passes will be productive for speckled trout, Spanish mackerel, pompano, bluefish, and ladyfish.  Shrimp under a popping cork, live pilchards, and artificial lures are all productive baits. 3” Gulp shrimp in new penny, natural, or glow and Cotee grubs in olive, rootbeer/gold on a ¼ oz jig head will account for plenty of fish.

Redfish will begin to school up on the shallow flats this month.  A low, incoming tide is preferred, the fish will move up onto the flats with the rising tide.  Scented soft plastics, weedless spoons, and topwater plugs work well for those who prefer to cast artificial lures.  Live bait can be extremely effective, anchoring up and fishing potholes is a proven technique.

You can count on one thing in June in Sarasota, it is going to be hot!  One way to beat the heat is to fish in the evening and at night.  Snook are nocturnal by nature and feed heavily in the dark.  Working lighted docks and bridges is the most popular night fishing method.  Anchor a cast away up-current of the light, then toss a live or artificial shrimp, baitfish, small jig, plug, or fly into the shadow line of the light.  You may also catch mangrove snapper, speckled trout, ladyfish, jacks, and maybe even a tarpon fishing the bridges at night.

Beach fishing for snook was decent last season, and it should be good again this summer, especially with the mild winter that we had.  Walk the beach in the morning, looking for snook in the surf line.  Cast out a small spoon, plug, or jig in front of any snook that you spot.  This is a great time to break out the fly rod, white baitfish patterns are best. Flounder, trout, ladyfish, mackerel, jacks, pompano, and other species will hit live and frozen shrimp and jigs off the Siesta Key beaches in June.