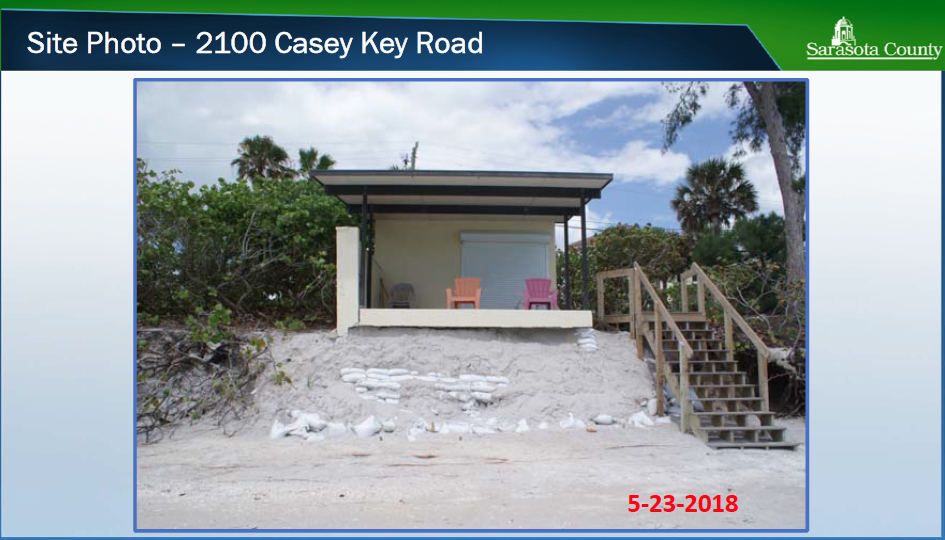 It took just under 24 minutes on June 12 for the Sarasota County Commission to grant a Class II Emergency Variance to a Casey Key couple so they could stabilize a cabana at risk of becoming debris on the shoreline.

Howard Berna, the county’s environmental permitting manager, told the board members that the petition was only the third for such a variance that staff ever had brought before the County Commission for approval.

Commissioner Charles Hines noted at the conclusion of the public hearing that the couple — David and Sara Evans — were able to get a county variance for sandbags first through an administrative process. Then staff was able to schedule David Evans’ appearance on the petition for the Class II variance when the determination was made that needed to be the next step. Therefore, it appeared to him, Hines said, based on the dates in the materials staff had provided the board, that the process had flowed fairly quickly.

Addressing Evans, Hines continued, “This is what I hope to see for other folks that are going through situations like you.”

Berna pointed out that the county’s Coastal Setback Ordinance — originally adopted in 1979 — allows the commissioners to grant a Class II Emergency Variance as a temporary measure to protect shoreline property.

In this case, Berna explained, erosion, “exacerbated by a fairly strong cold front that occurred late in March,” damaged the cabana on the Gulf of Mexico side of the property at 2100 Casey Key Road. That cold front caused more than 10 feet of dune erosion, Berna wrote in a June 12 memo to the board. “Waves washed out most of the sand underneath the concrete deck of the … cabana structure, exposing a slab foundation,” he added in the memo.

The cabana dates to the 1970s, the memo said; it is completely seaward of the county’s Gulf Beach Setback Line (GBSL). The latter is the figurative “line in the sand” established to preserve dunes and vegetation and thereby protect landward property from serious storm damage.

Evans told the commissioners that he and his wife bought the property in April 2006. “We had no clue that [the slab] was there, but we were happy to see it …”

The couple experienced two weeks of “high northwest winds,” Evans pointed out, at the same time in March when the Northeastern United States was enduring a series of “nor’easters.”

At times, he said, the wind speed at his Casey Key home was in excess of 30 mph.

Berna noted that the Evanses had applied for a Class I Emergency Variance to install sandbags on their property; that was granted on April 2, according to Berna’s memo. 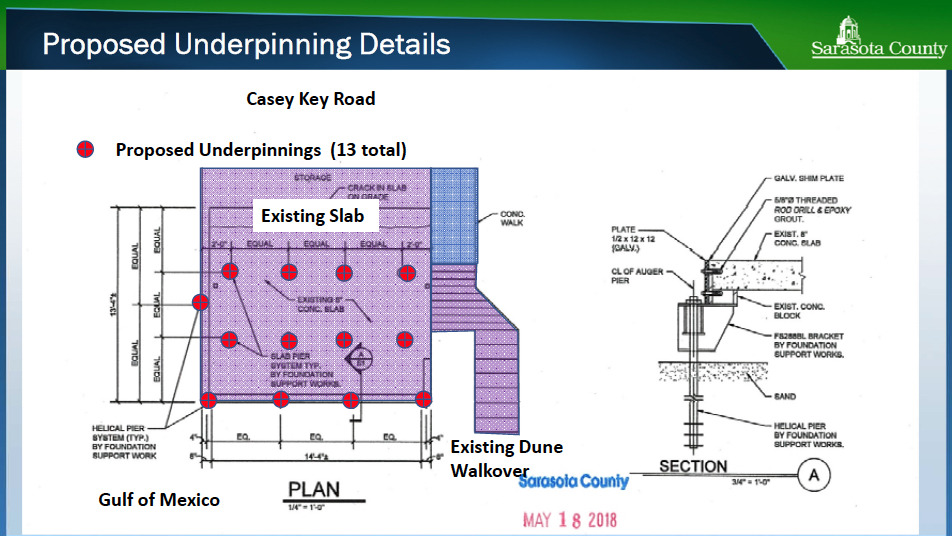 On May 18, the memo said, they applied for the Class II Emergency Variance so they could install 13 underpinnings “to reinforce the nonconforming slab foundation of the existing cabana structure.”

Those underpinnings “would be augered in under the slab” to support the foundation, Berna told the board. A staff stipulation calls for the project to be completed within a year, which Berna said he thought was possible, even with the necessary state permitting process. The variance would be valid for three years, he added, while the Evanses “look for alternative solutions.”

If the underpinnings are in place and further damage ensues, Berna pointed out, staff would require the removal of the structure.

“I don’t mind granting someone an emergency petition if [their] building looks like it’s going to fall into the Gulf,” Chair Nancy Detert responded. However, she added, approving subsequent emergency measures for a specific situation was not a sound policy. “Eventually, you’re going to have to face the fact that it’s an act of God that your cabana not be there anymore.”

“The sandbags have resisted some erosion events,” Evans told the board. “I hope they will preserve the bluff for a long period of time.”

Yet, though the sandbags have given him and his wife some sense of security when they are near the cabana, he added, “they really do nothing to place an upward force on the cabana deck as the foundation did, so it’s a risky situation.”

The stabilization project, he continued, would “not interfere with access along the beach”; nor would it involve the destruction of vegetation.

“The risk of not taking this proposed action,” Evans said, “is a deck failure could occur at any time.” Neighbors’ cabanas to the north had collapsed, he pointed out. “One night, there was a loud explosion [when] one cabana tipped over.”

“There’s a critical danger to beachgoers,” he added, as people walk the shoreline regularly in that area and a number of them have dogs with them that like to sniff around structures. An even greater risk exists, Evans told the board. “Children may find it interesting to go stand on a sandbag to see how soft it is.”

If he is unable to have the underpinnings installed, Evans added, the result could be “a debris field on the beach” if another storm occurs.

Four of his neighbors had offered their support for the project, he said. No member of the public addressed the board.

After Detert closed the public hearing, Commissioner Alan Maio made the motion to approve the variance; Commissioner Hines seconded it.

Commissioner Michael Moran was absent because of a death in his family, so the vote was 4-0.

Chair Detert pointed out that the county does have staff available to help the public, but the public often is not aware of that. She was pleased, she said, that Evans was able to find out about the emergency variance process and use it successfully. “Government acted the way it was supposed to. Yah!”

Fighting the sand on Siesta Key