Conclusion of swap of River Road for Siesta roads still expected by end of the year, county staff says 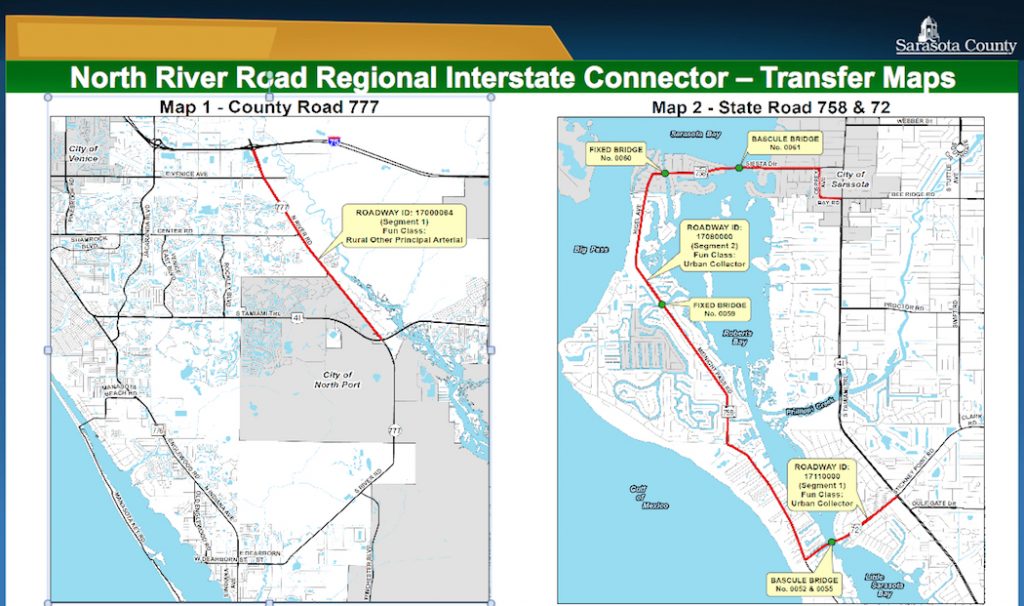 Concern arose recently that the Sarasota County plan to assume authority over Siesta Key roads in exchange for the Florida Department of Transportation’s taking ownership of River Road might take much longer than originally anticipated. However, county staff has affirmed that it is continuing to work on a timeline calling for conclusion of the process before the year ends.

Amid a multitude of issues that generated discussion during the County Commission’s budget workshops on June 19, one caught County Administrator Jonathan Lewis by surprise.

As Lewis was reviewing major county projects carrying over into the 2019 fiscal year, he noted that the board had approved the principles for River Road swap.

Staff was continuing to work with the Florida Department of Transportation (FDOT), the City of North Port and the West Villages Improvement District, Lewis continued, in an effort to conclude that initiative.

The swap has been seen as the only effective means of speeding up much-needed improvements to River Road. On May 22, the commissioners agreed on the facets of the deal, which would entail their commitment to assume authority over Stickney Point Road and Siesta Drive west of the drawbridges — which the state would continue to control — as well as Higel Avenue and the segment of Midnight Pass Road north of the Stickney Point Road intersection.

During the June 19 County Commission budget workshop, Commissioner Alan Maio told Lewis that, the previous day, FDOT representatives at the Sarasota/Manatee Metropolitan Planning Organization (MPO) meeting were “claiming eight to nine months before documents can be signed on the River Road swap.”

Maio conferred with Chair Nancy Detert and Commissioner Paul Caragiulo, who also attended the meeting, as representatives of the commission, to ensure their understanding of the comments was the same as his.

“That’s certainly not my expectation,” Lewis replied. “We certainly would like to see it done before November, if we can make it happen. … We would like some form of formal commitment from [FDOT].”

Lewis added, “We have been going back and forth on agreements. It does take a while.”

He pointed out that staff most recently had been dealing with FDOT on issues regarding Lakewood Ranch Boulevard, even though principles related to continued development of that road long had been affirmed between the county and the state.

Staff would follow up on what Maio said, Lewis promised.

Detert told him that the FDOT staff members at the MPO meeting were specific about the timeline, noting a variety of agencies that would need to sign off on the road swap.

In response to questions, Zachary Burch, government affairs and communications manager for FDOT, wrote in a May 14 email, “The process, once both the County and State agree on the road transfer limits and terms, includes a legal review by both the County and State [and] the County must pass a resolution supporting the transfer …” He added that a public hearing would have to be conducted, as well as “a Cultural Resource Assessment Survey by the Florida Division of Historical Resources, which assesses if there are any culturally significant areas that need to be preserved and/or that all sides are aware of them prior to the transfer.”

Burch concluded, “Once all of those steps are complete, both the State and County would sign the agreement to finalize the transfer.”

During the Reports segment of its May 22 regular meeting, the County Commission voted to approve the road swap stipulations upon which FDOT had insisted. The action was not conducted following a public hearing.

Lewis told the board members on June 19 that staff would consult with FDOT District One Secretary L.K. Nandam about the comments at the MPO session.

Detert then reminded Lewis that, months ago, when she had met with the FDOT secretary to talk about accelerating the widening of River Road and other improvements, the response she received was that, even if the projects were at the top of FDOT’s list, they would not begin until FDOT’s 2024 fiscal year.

He thanked the commissioners for telling him about the MPO discussion and made certain that the issue was added to staff’s list for follow-up after the budget workshop.

In early July, a request for an update to county staff was made. In an email, Media Relations Officer Drew Winchester wrote, “There is a shared understanding between Sarasota County and FDOT that the desired timeline for completing the formal agreements for the road transfer is before the end of 2018.”

For the second time in two weeks, a no-swim advisory has been issued for Siesta Beach. The warning from the Sarasota County Health Department came Thursday, Aug. 11, the result of higher-than-acceptable concentrations of enterococcus bacteria. North Lido Beach and Lido Casino were also on the list. Water activities at all three beaches are not […]