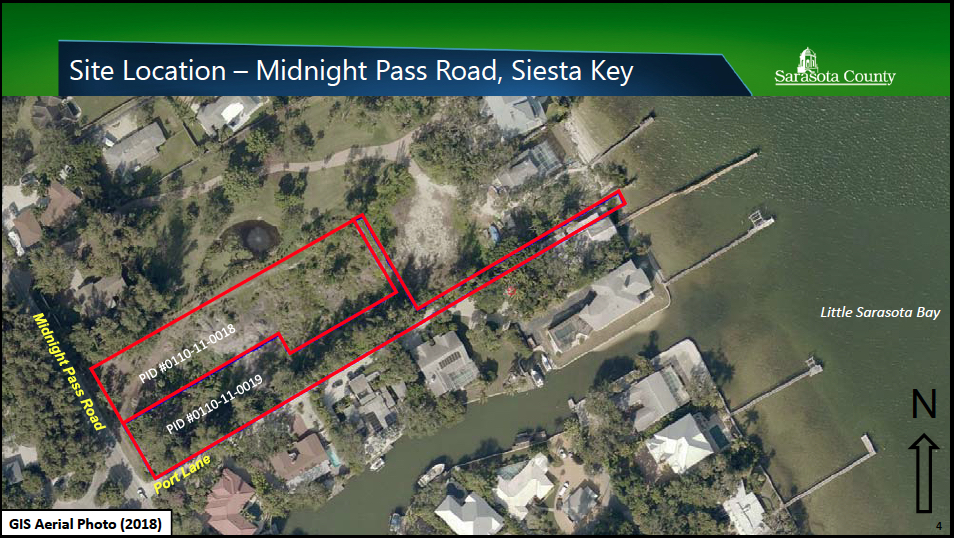 After listening to an explanation about the need for it, the Sarasota County Commission unanimously approved the 105-foot-extenstion of a fishing pier at Siesta Key property on the southern part of Midnight Pass Road.

The applicant, Justyna Clipper, had sought a Water and Navigation Control Authority (WNCA) Major Work Permit not only to lengthen the pier but also to add a 12-foot by 24-foot mooring area for a 24-foot-long vessel, a boat lift and a new kayak lift.

The structure will be shared by two parcels Clipper owns on Little Sarasota Bay, Chance Steed, a county environmental specialist, told the commissioners on Nov. 27.

As Clipper’s representative in the hearing, William Merrill III, a partner with the Sarasota firm of Icard Merrill, explained to the board members that the extension of the pier and the new dock are necessary to enable a vessel to navigate in deeper water to reach the channel in the bay, which is part of the Intracoastal Waterway (ICW).

The approximate average length of several neighboring boat docks, he noted, is 161 feet. If a vessel is not able to launch in deeper water, Merrill said, “you’ll be churning up bay bottom, which you don’t want to do.” He showed the commissioners slides to illustrate his remarks.

The maximum boat draft allowed by the permit would be 30 inches, Rees added.

“Just seeing the size of the docks is startling to an average person,” Chair Nancy Detert told Merrill. His photos made it clear why the longer dock is necessary, she added. “We all understand the danger of boats digging up silt as they come in and out, [which is] not helping the environment.”

An existing dock to the north is about 52 feet away from the existing 44-foot-long structure at Clipper’s property, Steed noted, while a dock to the south is 40 feet away.

The fishing pier, he told the board, is the largest structure staff can approve on an administrative basis. That was why Clipper had to apply for the permit. (The commission also serves as the Water and Navigation Control Authority in the county.)

The dock to the north of Clipper’s property is 104 feet long, Merrill said, while the one to the south is 205 feet.

Adjoining property owners have been opposed to the project, Steed noted.

County staff found that the construction was likely to have no negative effect, he said. Minimal seagrass damage will result from the installation of pilings, Merrill said, but Clipper will undertake seagrass mitigation.

A Nov. 27 county staff memo said that the mitigation “will consist of maintaining the natural beach habitat and tidal wrack line in its natural state and keeping nuisance and invasive plants out of the area and the adjacent uplands.”

“The shoreline is vegetated with mangroves almost entirely, and it is in good condition,” Steed pointed out.

Merrill also told the board that Clipper already had received the necessary permits from the U.S. Army Corps of Engineers and the Florida Department of Environmental Protection (FDEP) for the project.

Amy Stipancich, who lives at 7321 Midnight Pass Road, to the north of Clipper’s property, was the only speaker during the hearing to protest the plans.

Stipancich cited sections of the County Code involving WNCA regulations, saying the extended dock would have a detrimental effect on the navigational ability of other boat owners in the area of Clipper’s property. Vessels trying to move away from and toward the docks to the north and south would have “limited and/or restricted access,” Stepancich told the board.

Additionally, she said, Clipper’s use of the new dock would lead to limitations on the size of vessels the neighbors could use in the ICW.

In response to that concern, Rees of Icard Merrill pointed to a finding in the county staff memo: “Given the configuration of the proposed dock facility and its intended use, there are no long-term adverse navigational impacts anticipated from this project.”

Offering yet another point of opposition, Stipancich told the board, “My views toward the south are already impaired” by Clipper’s fishing pier. An extended dock would exacerbate that situation, Stepancich added.

Moreover, Stipancich said of Clipper, “She is a developer.” Six months after Clipper failed in 2016 to win county approval to construct three homes on the 2-acre site “to form a neighborhood,” Stipancich continued, Clipper began working on the plans for the longer dock.

The combined square footage of the two parcels that will share the dock is 85,436. One acre is 43,560 square feet. Each of Clipper’s parcels in the affected area is zoned Residential Estate, which allows only one dwelling unit per acre, the Sarasota County Property Office records note.

Stipancich told the commissioners that she is worried about whether Clipper will end up selling the two parcels together. If Clipper found separate buyers for them, Stepancich added, then the possibility might arise for more than one vessel to use the new dock, “turning it into a boat marina.”

Such a situation, Stipancich said, would lead to the visual “blocking of the aesthetics of the waterscape.”

Finally, she voiced worry that Clipper would seek “further enhancements down the road.”

In response to the last comment, Kristy Tignor, a professional engineer with The Tignor Group in Sarasota — who explained that she had designed the new dock — pointed out that it was the maximum size FDEP “would ever allow” on the site.

Casting for a Cause