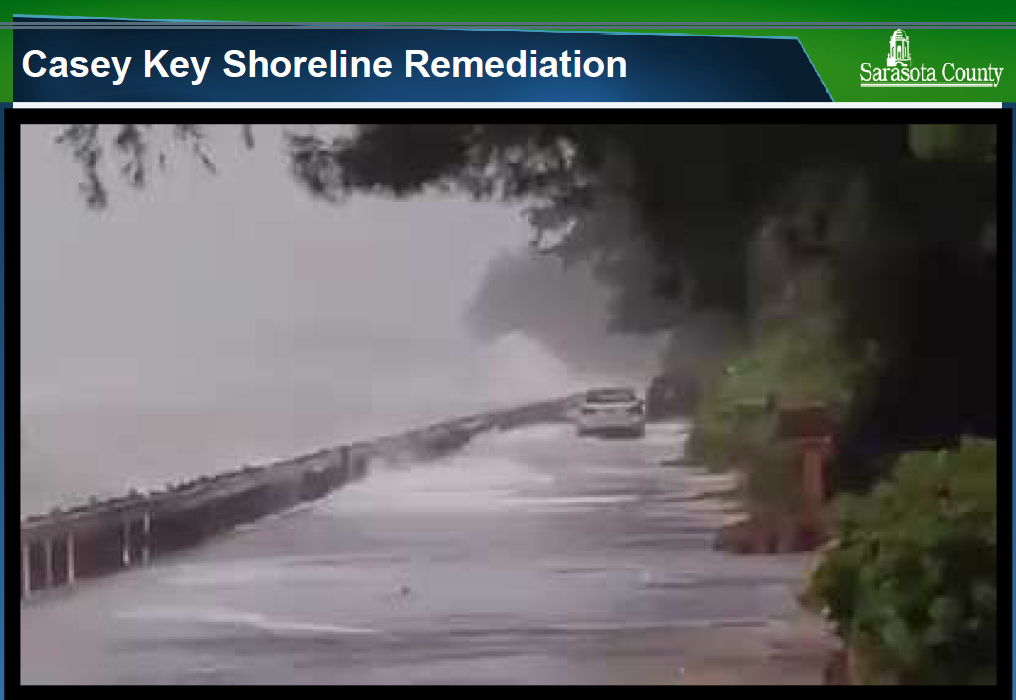 With erosion continuing to undermine the structural integrity of portions of Casey Key Road — and a public water line threatened in one area — the Sarasota County commissioners unanimously have agreed to allow staff to begin the design and permitting process for a rock revetment on the northern part of the barrier island.

However, during a Dec. 11 discussion that took close to 90 minutes, the board members voiced concerns about staff’s recommendation for constructing a seawall in the middle of Casey Key to ameliorate the problems in that area. Spencer Anderson, the county’s Public Works Department director, and representatives of a Jacksonville firm that studied the erosion — Taylor Engineering — explained that the Florida Department of Environmental Protection (FDEP) has not issued a permit in five years for a new rock revetment because those structures encompass a wider footprint than seawalls. The main concern, the commissioners learned, was the documentation of a sea turtle nest in the mid-key area. As a result, staff and the consultants explained that the U.S. Fish and Wildlife Service would be reluctant to approve a permit for a rock revetment in that location.

Anderson told the board that staff had discussed the issue with representatives of the Florida Department of Environmental Protection (FDEP). “It is a very difficult process to obtain a permit for the rock revetment. … There’s probably a way to get there. It may take a long time … and a lot of resources to get there.”

“We basically have one road there,” Chair Nancy Detert told him, “and they need to understand that.” 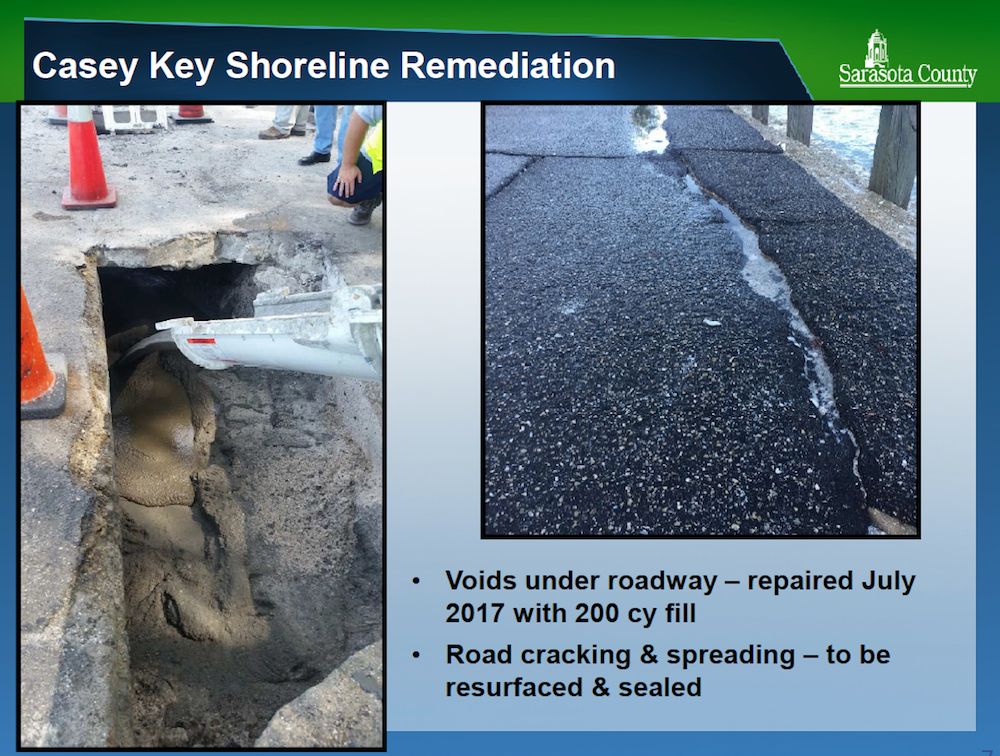 Anderson concurred with the fact that a solitary road serves as the hurricane evacuation route for Casey Key residents. Nonetheless, he said, the permitting agencies also would take into account the fact that “everything seaward of the road is private property.”

Nonetheless, commissioners voiced agreement with a Casey Key resident who addressed them earlier that morning, saying a seawall potentially could lead to exacerbation of erosion on adjoining parts of the beach.

The motion — made by Commissioner Alan Maio — ultimately called for staff to evaluate both the seawall option and the rock revetment option for the mid-key project, which would be in the vicinity of 2120 Casey Key Road.

Commissioners Michael Moran and Charles Hines, especially, also voiced hesitation about reviving a special taxing district that paid for a step revetment and other facilities on the northern and southern parts of Casey Key between 1991 and 1995. Moran talked, for example, of having staff conduct a straw poll of the owners of the 411 parcels that would be included in the taxing district.

Finally, the board voted unanimously to table the decision about how to pay for the projects — including the potential of a special taxing district —until January 2019. Moran asked that staff consider the best means of learning how the majority of the affected property owners would feel about shouldering part of the expense.

The person who spoke to them earlier during the meeting — Archie Urciuoli — also said the Casey Key residents he was representing in the mid-Key area objected to the prospect of having to cover 50% of the cost of the two construction projects, as the road and the water line both are public facilities.

Urciuoli added that the taxing district, which was established more than 30 years ago, “is defunct and should not be applicable.”

When the commission approved a special tax assessment of property owners on southern Siesta Key for two beach renourishment projects, he pointed out, those residents benefited from the improvements to their property as a result. The Casey Key situation, Urciuoli said, is different.

In the meantime, Larry Mau, assistant county engineer, explained that a temporary stabilization measure county staff had created for Casey Key Road — involving sandbags — is expected to have a life between three and five years. 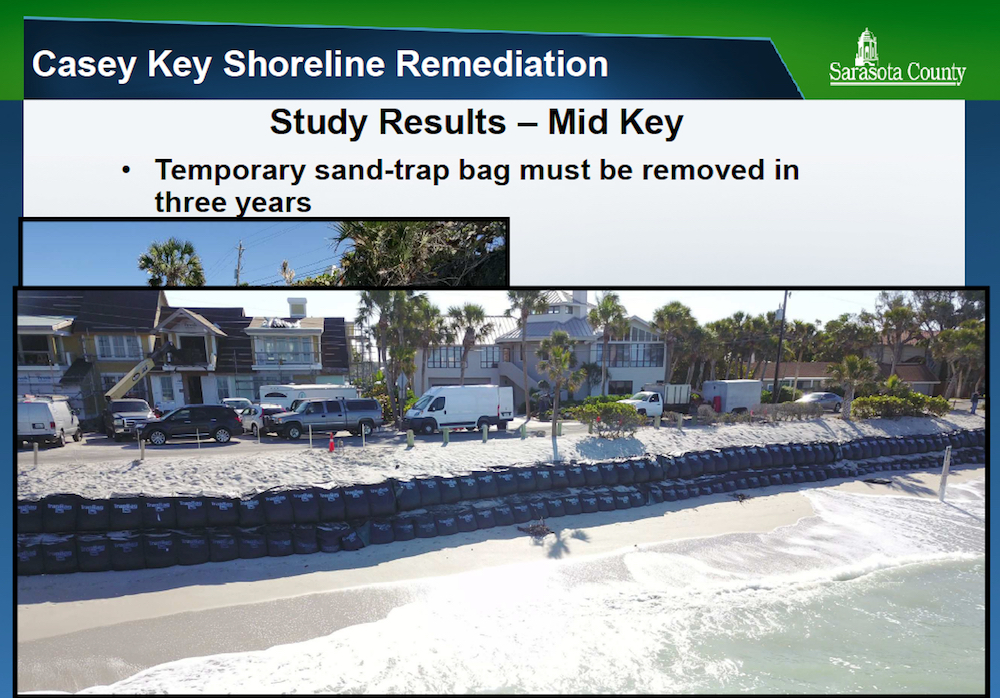 Responding to a question from Commissioner Hines, Mau pointed out, “[The sandbags] break down due to the sun, surf.”

“In your opinion, [are] the road and the water line protected so long as the bags stay in place?” Hines asked.

“I believe [they are] well protected right now,” Mau responded.

Nonetheless, he advised the commissioners, in the event of a major hurricane, “All bets are off.”

When Commissioner Christian Ziegler asked whether the sandbags could be replaced if that proved necessary, Anderson replied, “The bags do require periodic maintenance to keep them intact.” If a breach occurred, Anderson added, he felt that more sandbags could be put in place of those that had failed.