Educating the public about how to reduce nitrogen in waterways a key to mitigating red tide blooms, former county commissioner says 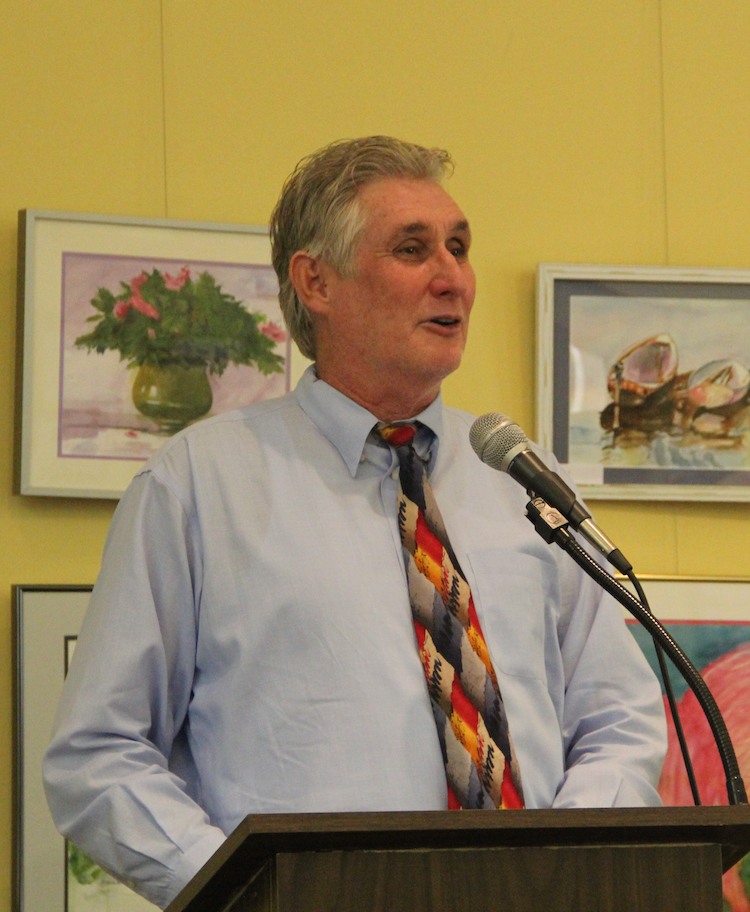 “I think ignorance is probably our greatest enemy in this fight,” he said.

Thaxton acknowledged that he was one of the primary proponents of the county’s ban on nitrogen-based fertilizer use during the rainy season each year, as well as the force behind creation of the county’s Stormwater Utility, which was the first in the state.

The nitrogen human beings add to the environment is one of the major feeders of the algae that causes red tide, Karenia brevis, he pointed out.

In response to questions from audience members, Thaxton suggested that county staff could put notices in utility bills to remind customers each year of the nitrogen fertilizer ban from June through September. He called that a “really, really simple way to get the messaging out.”

When one audience member questioned whether lawn care company employees adhere to the county’s ordinance, Thaxton replied, “I have less of a concern with the professionals than I do with the non-professionals.”

People who are in the lawn care business have to take a course that explains the facets of the county’s regulations, he pointed out.

Then he invited the audience members to visit a store such as Lowe’s or Home Depot and look at “these mountainous stacks of fertilizer.” If they went back four days later, all of it would be gone, he added, with homeowners primarily having been the purchasers.

Thaxton said people think using more fertilizer is better, likening that to the rationale a person who feels poorly often utilizes: If one aspirin will help, “two pills will make me feel great.” Yet, Thaxton explained, “Over-fertilizing actually harms the lawns.”

Much better enforcement of county regulations would help with red tide, too, he continued. However, he cautioned that enforcement without education angers people and makes them even less likely to follow the rules.

“Today, you will hear no state or local elected official looking to compromise the integrity of any rule, law or ordinance that protects our waterways,” he pointed out. Yet, when the Gulf of Mexico once again is clear, he added, efforts will resume to reduce pollution prevention.

“As a community,” Thaxton said, “we need to remember the suffering that we have now. … This is a systemic, land-use created issue.”

As a senior vice president for community investments with the Gulf Coast Community Foundation, Thaxton reported, “We are already starting to see evictions and children missing school” because of the downturn in business resulting from national publicity about the current red tide bloom, which worsened this summer. In another 30 to 60 days, he added, he believes more families will lose their homes, as many people working in service industry jobs have lost income.

“You have yet to see the economic impact of this red tide,” Thaxton said. If the current bloom subsides, and the area experiences no problems for the next three to four years, he predicted it would take that long for the economy to recover.

The feeding of the algae

“Red tide is always in the Gulf of Mexico,” Thaxton explained. “The blooms come and go.” What makes them worse — such as the one Southwest Florida and the Panhandle and Palm Beach County have experienced, he continued — is the nitrogen-rich water the algae feeds on as it comes near the shoreline.

“If you have this toxic organism and you are now actually feeding it,” he said, the bloom “is now going to be significantly more intense” and cover a larger area of the coast.

Some researchers believe that nitrogen from the decomposing fish killed by Karenia brevis also has been feeding the algae, Thaxton noted.

Leaking septic tanks are a source of the nitrogen along with fertilizers, he pointed out.

Robert Luckner, a member of the SKA’s Environmental Committee, noted that when the county won voter support in 2009 for the most recent penny tax to support a variety of infrastructure projects, about $20 million of the resulting revenue was to have been put toward new sewer systems to replace septic tanks. Yet, Luckner said, based on research he has undertaken, less than one-quarter of that money has been spent on that initiative since 2009.

(In the 2019 fiscal year budget, which the County Commission adopted on Sept. 27, $32.5 million has been allocated to a variety of wastewater projects, including more septic tank replacements. In an update provided to the board during a May 25 budget workshop, staff proposed slightly less than $2.5 million just for the septic tank replacement program, with the funds coming out of surtax revenue and income from utility payments. The county has budgeted another $2,390,000 for stormwater projects. The fiscal year began on Oct. 1.)

Unfortunately, Thaxton told Luckner, in the 1960s and 1970s, the county paid the “lion’s share” of the expense for new developments. It was cheaper to put in septic tanks, he continued, than to build sewer systems. Although the federal government began providing funds in the 1970s for central sewer systems, Thaxton added, county leaders waited until the 1990s to “really aggressively begin removing septic tanks,” and by that time, the federal assistance had ceased.

Thus, Thaxton said, county taxpayers and residents with septic tanks have had to bear most of the cost for the conversions to central sewer systems.

County Commission Chair Nancy Detert recently told him, he said, that the allocation for such conversions in the county will end around 2020 or 2022, “and we still have a lot of septic tanks that are in the water table, which is really a shame.”

In response to another question, Thaxton said that replacing the oldest septic tanks with central sewer systems would have “a huge impact. … All the barrier islands should be a priority area” for the endeavor, he added.