Under the heading, “Last large, full-time wastewater discharge to Sarasota Bay removed,” the Sarasota Bay Estuary Program (SBEP) recognized in its summer newsletter that the conversion of the Siesta Key Wastewater Treatment Plant into a master pump station had been completed.

Released on July 31, the nonprofit’s newsletter says, “One of the original goals in SBEP’s first Comprehensive Conservation and Management Plan was the removal of surface wastewater discharges to Sarasota Bay. Wastewater discharges contribute excess nitrogen to estuaries, which can cause algal blooms that reduce the amount of light that seagrasses need to grow while also depleting available oxygen for resident fish populations, the major cause of periodic fish kills.”

The article continues, “In 1990, wastewater contributed about 50 percent of the total nitrogen to Sarasota Bay. When the Comprehensive Conservation and Management Plan was adopted in 1995, the community had already made many improvements to wastewater treatment within the watershed. Nitrogen loads had decreased by 25 percent as a result of enacting the Grizzle-Figg Act of 1990, which required all regional wastewater treatment plants with direct surface water discharge to meet Advanced

The article notes, “Over time, those discharges have been removed as local governments and state agencies invested millions of dollars in modernizing our region’s wastewater treatment systems.”

On April 10, the Siesta plant marked its first day as a master pump station, Robert Luckner, a member of the Siesta Key Association’s Environmental Committee, reported to members at their May meeting.

Wastewater from Siesta Key is being pumped “to Sarasota County’s large treatment facility on Bee Ridge Road,” the SBEP added. 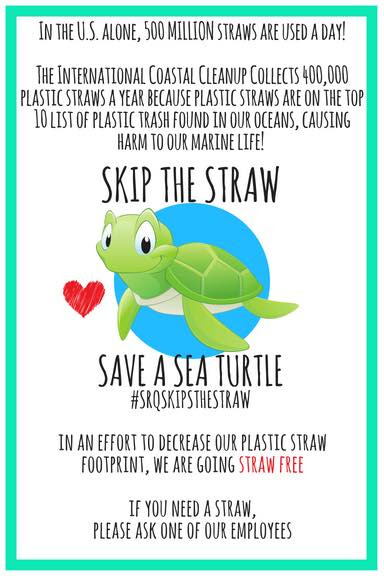 Speaking of the environment …

The August newsletter of the Siesta Key Chamber of Commerce congratulated The Hub Baja Grill “for becoming an official straw-by-request restaurant.” The newsletter added, “Thanks for helping keep our oceans clean” and includes the hash tag #srqskipsthestraw.

An accompanying poster pointed out that the International Coastal Cleanup collects 400,000 plastic straws a year, “because plastic straws are on the Top 10 lists of plastic trash found in our oceans, causing harm to our marine life!”

The poster lets Hub customers know that if they need straws, they may request them from a restaurant employee.

We cannot say it was totally unexpected, but still, it was most unfortunate.

“I have sad news yet again,” Kylie Wilson, coordinator of Audubon Florida’s Shorebird Monitoring & Stewardship Program in Sarasota County, reported on July 26. “[B]oth our Snowy Plover nests are gone [on Siesta Key]. The one next to the public beach was likely buried by sand due to the strong winds we have had recently.” The one on property owned by the Conservation Foundation of the Gulf Coast, she added, “was most likely predated, I would guess by ghost crabs. These nests were the closest nests we had to hatching on Siesta all season. It is really discouraging but we have to keep our hopes up! I’m not sure if we will see any more nesting this season on Siesta but I will keep you all informed if any activity comes up.”

Then, in her Aug. 2 update, she conceded: “Siesta’s nesting season has likely come to an end. There are still some Snowy Plovers hanging around (we saw 10 … on the [Audubon-guided] beach walk last Saturday) but they are not paired up or displaying territorial behaviors so it is likely they are done nesting. Still the buffers will stay up for a little longer just in case!”

On the positive side, she pointed out, “Longboat has been an amazing haven for the birds. The Least Terns there have been very productive. I would guess there were at least 30 fledged chicks between the two nesting cycles. The snowy plover chicks are also still alive!”

The plover chicks, she wrote, were just over two weeks old, which meant they were halfway to fledging — having feathers and wing muscles sufficiently developed for flight. “Hopefully these little guys will be a success story for the plovers this season,” Wilson added.

You saw what in the bay?