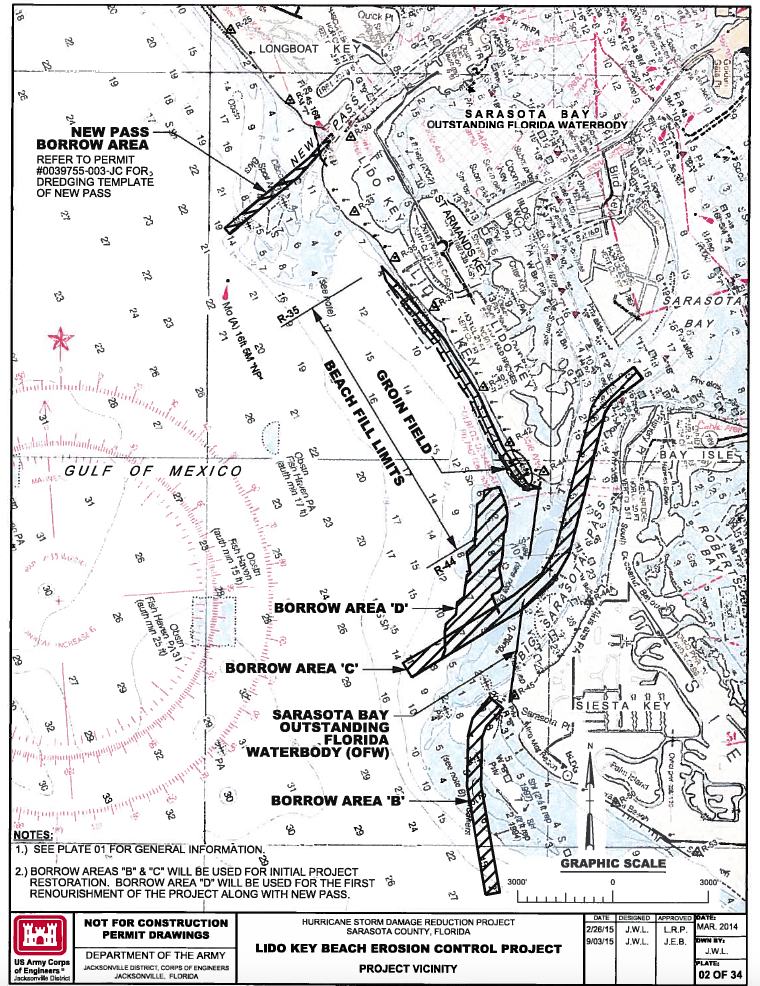 However, Valenstein did stipulate that the removal of sand from Cut — or borrow area — B of Big Pass and the easternmost 1,200 feet of Cut C may not occur from April to September.

He further stipulated that the permit authorize the removal of up to 1.3 million cubic yards of sand, instead of more than 1.7 million cubic yards, as FDEP would have allowed when it issued its December 2016 Notice of Intent to allow the project to proceed.

The two new permit conditions were included in the Recommended Order Florida Administrative Law Judge Bram D.E. Canter issued on May 8, after reviewing testimony and evidence in a five-day Florida Division of Administrative Hearings (DOAH) case held in December 2017, mostly in Sarasota. During that proceeding, the Siesta Key Association (SKA), Save Our Siesta Sand 2 (SOSS2) and three individuals who reside on Siesta Key challenged FDEP’s plans to issue the permit to the city and the USACE. They presented expert witnesses who explained what they have contended will be negative consequences for Siesta Key and Big Pass itself if sand is removed from the waterway and its ebb shoal.

Canter referenced the expert testimony of one of the SOSS2/SKA witnesses — R. Grant Gilmore Jr. — as the basis for his decision on the borrow area restrictions. Gilmore, who is president of the Vero Beach consulting firm Estuarine, Coastal and Ocean Science Inc., explained that he had discovered — through a field trip to the pass in the summer of 2017 — that spotted sea trout spawn in two areas of the waterway. Gilmore pointed out that such spawning sites are not common. As Canter noted in his Recommended Order, Gilmore testified that the areas are used repeatedly and “are important to the conservation of the species.”

Those trout spawn from April through September, Canter added.

The Lido Key Residents Association (LKRA) — which was allowed to intervene in the case — submitted Exceptions to Canter’s order, saying Canter was wrong to give weight to Gilmore’s testimony.

“Dr. Gilmore’s field investigation consisted of a single, one hour visit wherein he utilized a hydrophone to detect sounds in the water,” the LKRA argued. “In that one hour, Dr. Gilmore testified that he heard spotted [sea trout] spawning in certain areas, the sounds being more intense in some areas as opposed to others. … Dr. Gilmore did not testify that he saw any spotted [sea trout], his identification of their location and spawning activity was solely based on judging what he was hearing,” the LKRA contended.

“Dr. Gilmore presented no evidence to suggest that there were spotted [sea trout] spawning sites within the entirety of proposed Cut B,” it added.

Regardless of the stipulations in the Final Order, a June 19 city news release said, “Subject to any future litigation delaying this critical project, work is expected to begin by Spring 2019 and be completed by next hurricane season.”

In that release, City Manager Tom Barwin noted of the Final Order, “After losing approximately 15 feet of shoreline during Hurricane Irma and the deceptively destructive Subtropical Storm Alberto last month, this is uplifting news.” He continued, “In addition to the city’s infrastructure being increasingly vulnerable to saltwater intrusion, we are now experiencing high risks of property damage and business interruption.”

The release also pointed out that an agreement between the city and the USACE “will be executed soon. The U.S. Army Corps of Engineers will oversee the dredging portion of the project while the City will be responsible for monitoring it.”

Accompanied by city commissioners and Barwin on June 16, Rubio referenced the $13.5 million in funding the USACE announced for the Lido Renourishment Project on June 11. “Our job now is to get that money going,” Sen. Rubio added. “This time next year, there should be a beach out there.”

City staff has estimated the total cost of the project at approximately $22 million, with the rest of the funding to be split evenly between county Tourist Development Tax revenue set aside for the city for beach renourishment/maintenance initiatives and a state grant.

Since Canter filed his Recommended Order, Barwin has sought to persuade the SKA and SOSS2 from pursuing further legal challenges.

In the news release, he said, “I again urge the handful of people litigating this matter to forego additional litigation and work with us to become environmental and shoreline protection leaders in the state of Florida. I remind all this permit requires unprecedented monitoring and future adjustments as warranted.”

“We’re pleased that Lido has gotten funds,” SKA President Gene Kusekoski said in a June 20 telephone interview, referring to the USACE’s June 11 announcement. “They are our neighbors and they are in crisis. … Our one and only objection is the source of sand.”

The SKA has been especially concerned, Kusekoski continued, about dredging in Cut C. “Once you dig that trench, you change the dynamic of the pass and God knows what’s going to occur.”

Kusekoski also took exception to the fact that Barwin continues to indicate that only a small number of Siesta residents are opposed to removal of sand from Big Pass. An SKA survey in 2017 showed 88% of the nonprofit’s members were resolutely against the project, Kusekoski noted, and they represented about one-third of the island’s residents.

SKA Vice President Catherine Luckner pointed out in a June 20 email that the SKA filed a Verified Complaint in March 2017 in the 12th Judicial Circuit Court as a second means of halting the dredging of Big Pass. “The purpose of the SKA Verified Complaint is to encourage the City of Sarasota to engage [Sarasota] County to develop a Best Practices project,” Luckner stressed.

“We hoped [the complaint] would encourage the City of Sarasota as a ‘good neighbor’ to work with the County regarding coastal management,” she added in the email.

“SKA will continue to work for a best practices project, through donations, researching and engaging governmental representatives, serving the public interest of natural resources [and focusing on the] recreational and financial stability of our unique and beloved coastal community,” she concluded her statement.

In a telephone interview Peter van Roekens, chair of SOSS2 said, “We’re going to do everything we can to make sure Siesta is not harmed.”