Almost exactly five months after Sarasota County staff notified Benderson Development Co. of a multitude of insufficiencies in the firm’s revised proposal for the mixed-use Siesta Promenade complex, Benderson responded to the county. 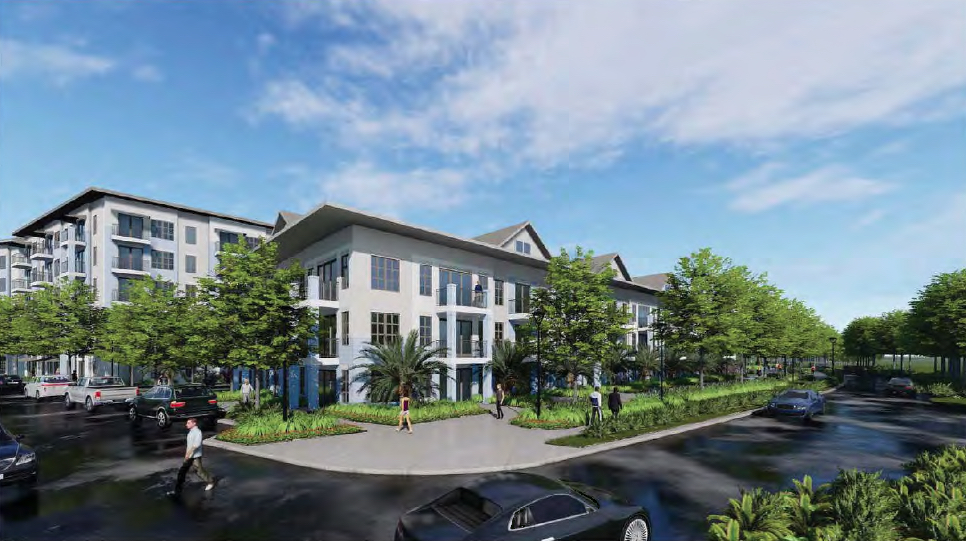 However, based on copies of correspondence SNL has obtained between the Florida Department of Transportation (FDOT) and consulting firm Kimley-Horn and Associates of Tampa, Benderson has yet to provide all sought details about traffic projections for the project.

In a Dec. 19, 2017 email, Nathan Kautz, an FDOT traffic services engineer, notified Kimley-Horn employees that they had not proved that a traffic signal would be warranted at the intersection of Stickney Point Road and Avenue B and C.

Kautz added that the median opening at Glencoe Avenue would need to be closed to accommodate traffic headed from the east to a northbound queue, “if a signal is warranted.” Further, Kautz wrote, “How Avenue A will work with the queues at the proposed signal should be addressed.”

In a Nov. 6, 2017 email to Kimley-Horn employees, Kautz noted that some of his colleagues had asked for assurance that the proposed signal at Stickney Point Road and Avenue B and C would not cause westbound traffic queues to back up into the intersection of U.S. 41 and Stickney Point Road.

However, Siesta Key residents have talked of such traffic backups occurring already on days during the height of season when beachgoers are headed from the mainland to the island via Stickney Point Road.

Additionally, the responses to county questions that Benderson submitted to county Planner Todd Dary on Dec. 28, 2017 indicate increased plans for Siesta Promenade residents and shoppers to use streets in the adjacent Pine Shores Estates neighborhood.

Todd Mathes, Benderson Development’s director of development, had assured Pine Shores residents that the firm would limit traffic through the neighborhood, Sura Kochman, a spokeswoman for the Pine Shores Neighborhood Alliance, told SNL in a telephone interview. However, a map in Mathes’ 71-page response to county staff shows “Vehicular Connections” on Glencoe Avenue and Crestwood, Beechwood, Birchwood, Brentwood, Hazelwood and Redwood streets. 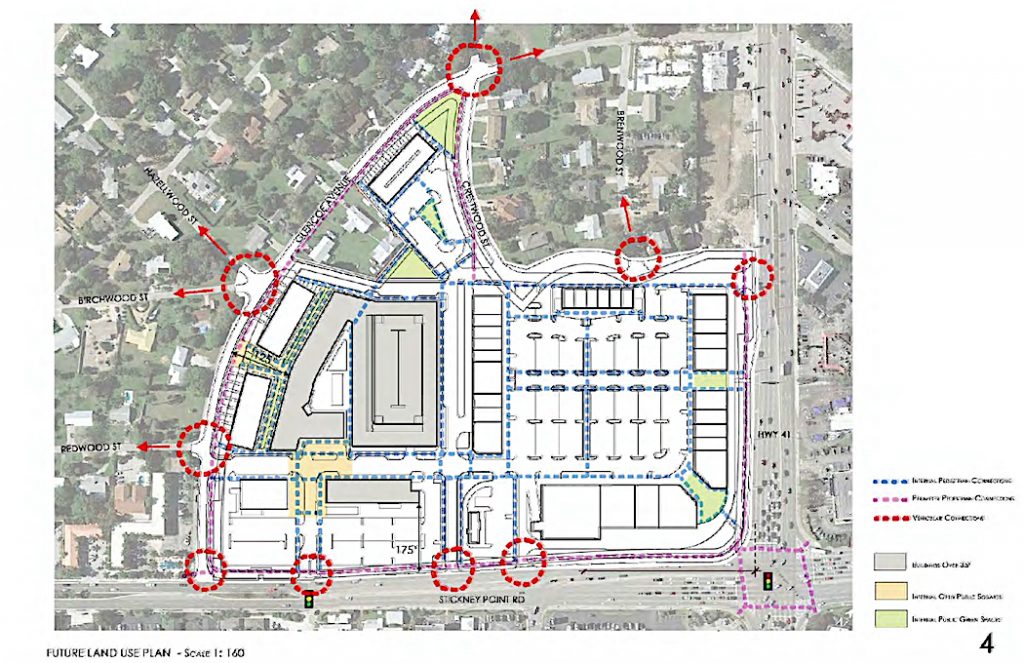 The Alliance is a coalition of six neighborhood associations and commercial property owners in the vicinity of the Siesta Promenade site, which is on the northwest corner of U.S. 41 and Stickney Point Road.

Parts of Pine Shores Estates date to the 1950s, Kochman told SNL. “This is not a major thoroughfare neighborhood, and they are going to destroy the peaceful existence of everybody in this neighborhood for their own gain,” she said of Benderson Development employees.

Kochman pointed to Future Land Use Policy 2.3.7 of the county’s Comprehensive Plan to underscore her belief that Siesta Promenade, as proposed, would be inappropriate where it is planned. That policy says, “In established residential areas, incompatible land uses shall be discouraged if traffic is generated on abutting local streets in amounts that would substantially and adversely affect traffic flow, traffic control and public safety.”

On June 28, 2017, Mathes submitted revised plans for Siesta Promenade to county staff. Instead of 506 dwelling units, the new proposal called for 415. The December 2017 documentation says 414.

A hotel on site was modified in the June 2017 documents to provide 130 rooms instead of 150. However, Benderson still called for 140,000 square feet of retail and office space.

From the past to the future

In that Dec. 28, 2017 letter to county Planning and Development Services staff, Mathes reiterated that Siesta Promenade is planned on property that “was formerly home to a 300+ unit mobile home park.” He added, “The site has long been considered eligible and appropriate for CAP [Critical Area Plan] designation.”

On Jan. 25, 2017, the County Commission voted 4-1 to allow the firm to proceed with specific studies in accord with the request for the CAP designation. Winning approval for that would allow Benderson to have density up to 25 units per acre, instead of the 13 per acre allowed in standard county Commercial General zoning districts.

In his Dec. 28, 2017 letter, Mathes says the proposed density would be 18 units per acre. However, Kochman disputes that, saying the 414 dwelling units, combined with the 130 hotel rooms — which equate to 65 residential units — add up to 20.5 units per acre.

In one response to county staff’s July 2017 questions, Mathes indicated that the residential units would be priced at “market rate (with the exception of the required attainable living units) and unrestricted by age or otherwise.” Because most will have one or two bedrooms, and they will be close to the beach, he continued, “our expectation is that more units will be occupied by temporary residents and single or dual occupant households but, again, there will be no restriction.”

The development would include five-story, three-story and two-story residential towers, transitioning down in height the closer they would be to Pine Shores Estates, he noted.

Planner Dary wrote in a Jan. 2 email that county staff would begin its standard review of the latest documents to determine whether they are complete. That would take 30 to 45 days, he indicated. After that, if the materials are deemed complete, he added, the formal review process would commence.

The first public hearing on Benderson’s petition for rezoning of part of the 23.38 acres and its request for CAP designation would be held before the county’s Planning Commission about 60 days after Planning and Development staff signed off on the revised applications, Dary noted. The final hearing before the County Commission would occur approximately 45 days after the Planning Commission hearing, he added. Notices of those hearings will be advertised, he pointed out.