The Florida Department of Transportation (FDOT) is working on plans for restriping and the installation of “Qwick Kurb” devices at the intersection of Siesta Drive and Higel Avenue on Siesta Key, the president of the Bay Island Siesta Association announced to Siesta Key Association (SKA) members. 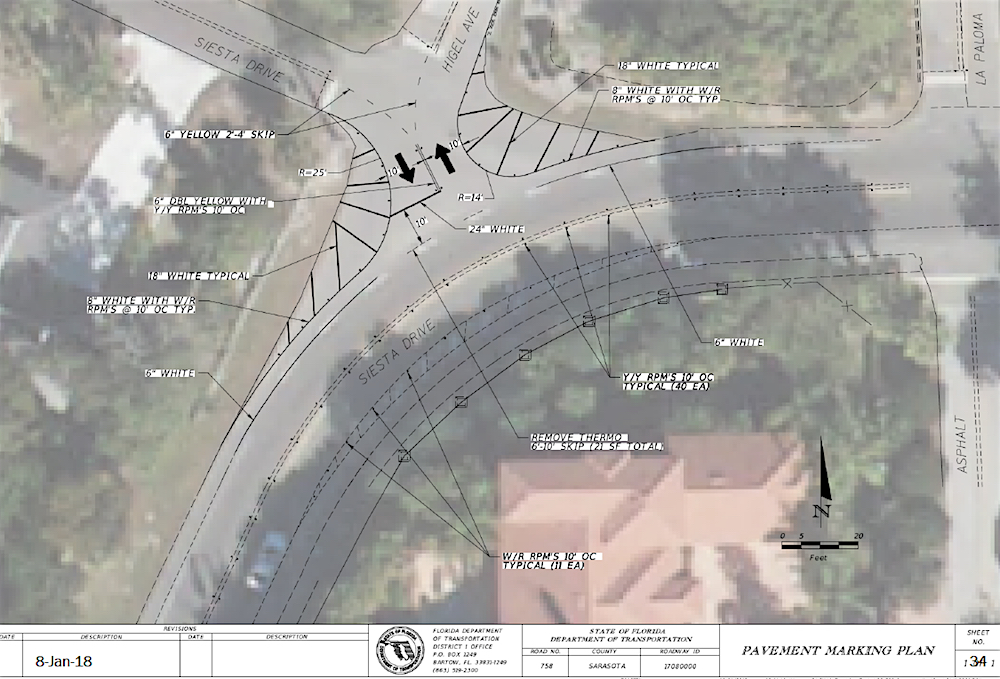 The goal is to reduce the number of accidents in that vicinity, Pat Wulf, the newly elected Bay Island Siesta Association president, explained during a January presentation.

The flexible poles, about 3 feet tall, he said will be anchored into the asphalt, creating a barrier to keep cars from veering outside the travel lanes,

The poles — made by Qwick Kurb Inc., which is headquartered in Ruskin — will not cause damage to a vehicle that hits them, he pointed out. If the system works, he added, FDOT engineers said they would consider replacing the poles with a guardrail.

Additionally, FDOT plans to install new speed “feedback” signs facing motorists entering the curve, so if people are traveling more than 25 mph, the signs will flash “Slow Down,” Wulf said.

The current signs flash “Slow Down” only if a motorist is driving faster than 30 mph, Wulf noted.

As for the 25 mph warning signs on both approaches to the curve: Wulf explained that those are not considered speed limit signs. A person driving faster than 25 mph cannot be cited for an infraction, he said.

In August, FDOT installed new signage that lowered the speed limit from 40 mph to 30 mph in the immediate vicinity of the Higel/Siesta Drive curve. The sign facing southbound traffic will be moved nearer the Anglin Drive intersection, he noted, to make it more visible.

FDOT also will consider installing another speed feedback sign on the left side of Higel Avenue to increase the odds that northbound drivers will see a warning about their speed as they approach the sharp curve, Wulf continued during his January presentation. That would complement the sign on the right side of the road, he noted, which will be moved from its location behind a utility pole, so it will be more visible.

Wulf addressed the approximately 70 audience members on behalf of the Make Siesta Drive Safer (MSDS) committee of the Bay Island Siesta Association, which has been working over the past months on a number of initiatives to try to increase the safety of both drivers and pedestrians on the 1.9-mile segment of Siesta Drive from the Osprey Avenue intersection to the Higel Avenue intersection.

Yet another request MSDS has made, Wulf continued, is for FDOT to forbid left-hand turns out of La Paloma Avenue, which is the residential street just north of the Siesta/Higel curve.

If a person tries to turn left onto Siesta Drive from La Paloma, Wulf pointed out, “You are basically taking your life into your hands.”

One audience member familiar with La Paloma, however, cautioned Wulf to talk further with FDOT staff about the installation of the “Qwick Kurb” devices. The woman pointed out that if those devices are in place, that will reduce the ability of motorists to veer out of the way on Siesta Drive if they are behind a northbound vehicle getting ready to turn right into the La Paloma neighborhood. In spite of residents’ efforts to ensure they use signals and brakes well in advance of their turns, the woman said, some motorists fail to take sufficient notice and steer to the left to avoid collisions. If the flexible posts are in place, a southbound vehicle on Siesta Drive would have nowhere to go to avoid hitting a northbound motorist attempting not to hit someone making that turn into La Paloma, she explained.

“I appreciate your bringing that up,” Wulf replied. “No one had thought of that,” he added, but MSDS representatives will address that with FDOT.

Members of the committee had suggested a stoplight at the intersection of Siesta Drive and Higel Avenue, Wulf noted, but FDOT officials opposed that. Their goal is to keep traffic flowing on the road, Wulf said, as it is a hurricane evacuation route.

Although Make Siesta Drive Safer would like to see the speed limit lowered to 30 mph from Osprey Avenue to the intersection of Midnight Pass Road and Higel Avenue, Wulf explained, FDOT says that because the route is a state road (758), state guidelines call for the 40 mph signs to remain there — unless accident statistics and/or a speed study conducted in early October give the department sufficient reasons to lower the speed.

If the road were a county road, he said, FDOT engineers indicated they easily would be able to lower the speed limit to 30 mph because of its residential nature.

Although MSDS representatives have talked with Sarasota County Administrator Jonathan Lewis about the potential swap of River Road, a county road, for several Siesta routes, that transaction is unlikely to occur soon, Wulf added.

A few months ago, then-County Administrator Tom Harmer announced that negotiations had begun between county administrative staff and FDOT regarding such a swap. The county has been unsuccessful in winning state funding to make the improvements the commissioners argue are needed for River Road because of significant new residential development in that area of South County and the construction of a new Spring Training complex for the Atlanta Braves in the West Villages. The latter is scheduled to open in 2019.

When SNL asked county staff for an update, Media Relations Officer Drew Winchester replied that as of Jan. 5, “there was nothing new to report regarding the potential swap. Negotiations remain ongoing with FDOT.”

Finally, Wulf noted that MSDS has been talking with FDOT engineers about adding crosswalks at the intersections of North Shell Road and Hamilton Avenue, along with how best to create a safe crossing situation for pedestrians to the north and west of the Siesta/Higel curve.

When SKA Environmental Committee member Robert Luckner pointed out that the pedestrian crosswalks FDOT installed in 2012 on Midnight Pass Road between Beach Road and Stickney Point Road were an inexpensive but successful addition, Wulf replied, “We’re jealous as we can be about those crosswalks.” FDOT staff has said that the statistics it has about pedestrian crossings on Siesta Drive and Higel Avenue have been insufficient to warrant the installation of crosswalks, Wulf added. However, MSDS members are hopeful that the October 2017 traffic study will provide updated numbers to support such an initiative.