Floridians may be faced with more of a philosophical rather than political dilemma come Election Day 2014: Should medical marijuana be

legalized for chronically ill people in the state?

UnitedForCare, People United for Medical Marijuana, is working to place the medical marijuana issue on the Nov. 4, 2014, ballot. The not-for-profit Orlando-based group has and is soliciting volunteers and signatures for a petition to place the question before voters.

The group has its work cut out for them, both logistically and financially.

A total of 683,149 signatures of registered Florida voters need to be collected and validated as correct by Feb. 1. According to UnitedForCare Campaign Manager Ben Pollara, “We are past 150,000 petitions collected and are expanding our efforts throughout the state.”

The ballot language then needs to be approved by the Florida Supreme Court.

If the proposal makes it to the ballot, 60 percent of the voters must approve the measure for it to become law, probably in early 2015.

Major funding source behind the ballot initiative is John Morgan, the attorney whose firm’s advertisements of Morgan & Morgan “For the People” seem to be on radio and TV every commercial break.

Morgan has estimated that the bankroll for the signature collection will cost about $3.5 million. The expected fight with anti-drug groups will probably cost another $10 million, the conservative Morgan conservatively predicted.

Are we ready for such a law?

Florida voters usually fall into the ranks of older, white, conservative, and retired from the Midwest or Northeast. The stereotype of voters call for things to stay the same, in other words maintain the status quo, keep the taxes low, protect us from the tales of woe caused by crime-ridden streets, and let us remain oh-so-happy in our retirement years on the beach or golf course.

But a funny thing has happened to the typical Floridian — baby boomers are growing up. There’s excitement sought, active retirement demanded, a younger element fomenting in the Sunshine State and hey! Some of us have found that marijuana eases the pain caused by cancer, HIV, and other debilitating diseases.

“Marijuana, legal as medicine under state law in 19 states and the District of Columbia, has been shown to be an effective treatment for the symptoms and side effects associated with HIV/AIDS, cancer, hepatitis C, PTSD, MS and other neuromuscular disorders, glaucoma, and chronic pain,” according to United For Care.

The group adds that “the American College of Physicians, American Public Health Association, American Nurses Association, and many other associations and organizations support the availability of medicinal marijuana.”

It’s important to remember that the proposal as written would only allow marijuana to be used as a prescription drug by physicians.

The ballot summary pretty much sums the matter up: “Allows the medical use of marijuana for individuals with debilitating diseases as determined by a licensed Florida physician. Allows caregivers to assist patients’ medical use of marijuana. The Department of Health shall register and regulate centers that produce and distribute marijuana for medical purposes and shall issue identification cards to patients and caregivers. Applies only to Florida law. Does not authorize violations of federal law or any non-medical use, possession or production of marijuana.”

Opponents appear to be headed by a national nonprofit group based in St. Petersburg, Drug Free American Foundation, Inc. DFAF is headed by Betty S. Sembler, Chairwoman, and is a “non-profit drug prevention organization committed to developing, promoting, and sustaining global strategies, policies, and laws that will reduce illegal drug use, drug addiction, drug-related injury, and death.”

The group has stated that “Smoking is an ineffective and illogical way to deliver medicine — dosage cannot be regulated, and tar and other harmful compounds are delivered directly to the lungs along with any helpful cannabinoids (compounds in marijuana).

“Other delivery methods aren’t safer either,” the group continues. “Vaporizing does not filter cancer-causing tar or other chemicals, and eating delivers the same damaging compounds as well as the insecticides and fungi found in unmonitored crops.”

The group then goes into something of a “Reefer Madness” scenario in its on-line comments (DFAF.org).

“Psychological problems include “paranoia, emotional disorders, increased risk of schizophrenia and other neuropsychiatric disorders, memory loss, increased tolerance to intoxication, addiction to marijuana and other drugs (especially with its increasing potency), loss of ability to concentrate and loss of inhibition.

“The claim that smoked marijuana is medicinal is a tactic to legalize marijuana for any purpose and to eventually legalize other drugs for personal use,” DFAF continues. “There is great potential to make a lot of money through the sale of marijuana. Tobacco companies, who made a killing on cigarettes to the detriment of so many, have already patented names for marijuana products.”

Setting aside the he-said, she-said commentary are the results of a poll conducted by Public Policy Polling between Sept. 27-29. About 74 percent of Independent voters favored legal medical marijuana; Democrats approved the measure by 68 percent; and Republicans were 46 percent favorable of the issue. 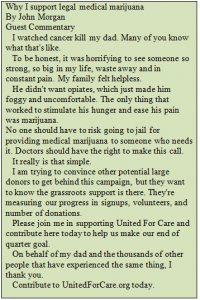 California is one of the 19 states that have passed a medical marijuana initiative. The “Other Coasters” have more recently legalized pot for individual consumption with a hefty tax. Canada has also legalized medical marijuana. Price per “joint,” or cigarette, is about $7, around twice the cost of cheap tobacco smokes.

Morgan has been quoted as saying that legal, medical marijuana use “is not so much a law but an act of compassion.”

He tells the story of his brother and father using pot to fight the nausea of chemo treatments.

One colleague said he was diagnosed with a brain tumor. Surgery and other intrusive medical treatments were advised. He demurred and continued to smoke dope.

Six months later, when he went back to the doctors for a checkup, the tumor had vanished.

He calls it his “magic marijuana treatment.”

There have been some mutterings that John Morgan is bankrolling the marijuana initiative to assist his friend and law partner, Charlie Crist, in his potential run for Florida governor against incumbent Rick Scott in 2014.

Political aficionados indicate that the expected Democratic turnout next year by younger voters would bode well for Crist’s run for office. He served a term as governor as a Republican, and lost to Scott last time running as an Independent. He has since changed his party affiliation to Democrat.

Insiders have hinted that any Democrat on the ballot next year could expect a 3- to 5-percent “bump” in votes if the marijuana issue is on the ballot.

For more information on the marijuana matter, go to the pro-dope site unitedforcare.org or the anti-drug site DFAF.org

County abandonment of 360-foot segment of North Beach Road sought, along with a variance for new construction in the same area

Coming Home After a Storm