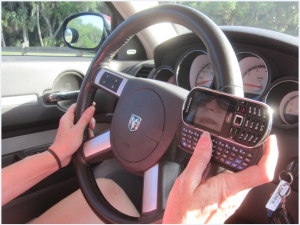 January 30, 2013 dawned mild and clear on Longboat Key with temperatures in the mid 60s, climbing to 80 that afternoon. It was the kind of day that explains why the population of this ten-mile long slice of paradise between the Gulf of Mexico and Sarasota Bay more than doubles during the winter months as snowbirds flock to the town’s white sand beaches and world class resorts.

It’s was a day very much like this that first attracted Louise Rich, 90, and her late husband Art to the area almost 30 years ago.

There have been many memorable days since. January 30, 2013 would become the latest.

Like most Wednesdays, Rich had risen early to take the aerobics class at Longboat’s Bayside Recreation Center. Her lifelong dedication to exercise is testament to the benefits of an active lifestyle. Most are surprised to hear her age. She looks and moves better than many folks twenty years her junior.

Heading home after the class, she turned north on Gulf of Mexico Drive. It’s a route she has traveled countless times. Traffic was light. The road was clear. She pondered the day ahead, invigorated by her workout. It was just shy of 9:00 A.M.

Heading south, Billy Gene Atchley, 45, of Sarasota was driving a 2004 Ford pickup. In one hand was the steering wheel. In the other, a cell phone…until…it slipped from his grasp. As he reached down to retrieve it from the floorboard he swerved into Rich’s lane.

“I saw him at the last moment,” she recalled recently. “But it was too late.” She was struck head on. There was the hideous sound of bending steel, shattering glass and the pop of her airbags deploying.

The accident report states Atchley admitted dropping his phone. He was cited for careless driving and driving with a suspended license. Rich was transported to Blake Memorial Hospital. Amazingly, her injuries were relatively minor, thanks to those airbags and what her doctor called her high level of fitness.

In many states, Atchley would have faced an additional charge: use of a cell phone while driving. According to the Insurance Institute for Highway Safety (IIHS) 46 states restrict cell phone use while driving to some degree, from a complete ban in California, Connecticut, Delaware, Maryland, Nevada, New Jersey, New York, Oregon, Washington and West Virginia to a ban on texting in a total of 39.

But Florida is among a group of just five states with no restrictions. That may be about to change.

Detert’s bill only addresses texting, carrying a $30 fine; it would not extend to cell phone use for voice calls. It also classifies a violation as a “secondary” offense, meaning an officer would only be able to cite a driver stopped for some other infraction.

That was also the case with Florida’s seat belt law enacted in July 1986. It wasn’t until 2009, that it became a primary violation. Then as now, the “secondary” designation was added to placate critics worried about intrusions into private life. As the Florida Current reported on April 16, “The texting ban has generally been favored in the Senate (in the past) but stumbled in the House, with key members averse to ‘nanny state’ laws.”

But advocates for restrictions point to mounting evidence of the risks associated with distracted driving.

A recent Center for Disease Control (CDC) study found that in 2010 nearly one in five crashes involved distracted driving.

Here are some other statistics to consider:

•69 percent of drivers in the United States ages 18-64 reported they had talked on their cell phones while driving within the past 30 days. For comparison, In the U.K. the percentage was just 29 percent.

•31 percent of U.S. drivers 18-64 reported that they had read or sent text messages while driving within the past 30 days.

So how to protect yourself on the road? Experts agree the safest alternative is to simply turn off your phone. But for many, especially younger drivers, the temptation to stay “plugged-in” is often too strong. The CDC report included the revealing statistic that in June 2011, more than 196 billion text messages were sent and received in the U.S. That was up more than 50 percent from June 2009. With such explosive momentum behind this increasingly popular mode of communication, the incidence of driving-while-distracted seems certain to rise.

Such growth in texting might explain the seemingly counter-intuitive findings of a recent study by the Highway Loss Data Institute that showed no reduction in accidents in states where distracted driving laws were passed.

It may take increased awareness and education just to maintain the status quo, given the burgeoning texting trend. Proponents of tougher laws also point out that it took years for seatbelt use to reach current levels of over 85 percent compliance and for highway death totals to begin trending down.

According to Dr. Ileana Arias, CDC Principal Deputy Director, “Not only is the problem severe, it’s becoming worse over time.”

Bluetooth devices can help keep hands on the wheel and eyes on the road with voice calls. But most offer no help when it comes to texting.

“We kid ourselves into thinking we’re incredibly good multitaskers,” Arias continued. “But the data suggests multitasking is not as effective as people think.”

Adds accident victim Rich, “My kids use their phones when driving and it really bothers me. They say it’s no different than talking in the car, but it is different. A phone call is finite. You expect to accomplish something and your attention is outside the car.”

Carol Lacnit, consumer editor for edmunds.com, recommends an after market device like the one offered by ZOOMsafer. It blocks incoming calls and texts while a vehicle is in motion while adding an automated message informing the caller that the driver is unavailable.

Some have voiced the opinion that laws already on the books should be applied to distracted drivers.

Indeed, the Florida careless driving statute that Billy Gene Atchley was cited for in his accident on Longboat reads as follows:

“Any person operating a vehicle upon the streets or highways within the state shall drive the same in a careful and prudent manner…. Failure to drive in such a manner shall constitute careless driving and a violation of this section.” – Florida 316.1925.

Calls were placed to the FHP seeking comment on whether an officer could cite someone for careless driving before an accident on the basis of the driver’s eyes not being on the road due to texting.

Lieutenant Gregory Bueno in Fort Myers, with the Public Affairs Division, replied by email that he did not want to comment on pending legislation and offered the boilerplate response that FHP would enforce any legislation that is passed. He said he would pass the question on to FHP’s legal section. No response was received by press time.

Longboat Key’s Chief of Police Peter Cummings was willing to tackle the question, and in the process shed some light on the reticence of most officers to use the careless driving approach: “You start getting into gray areas when you talk about pulling someone over and detaining them; civil liberties challenges might be out there, saying that you detained them unlawfully, even though your motives were public safety.”

But Cummings added that personally, he would stop someone if he thought they were a danger to others. “I would likely stop that person and issue a warning. If I had to justify my actions later under the public safety intent I’d let the judge make that decision of it being a lawful stop.”

Many less senior officers might not be as willing to take that stand though, wanting to avoid responsibility for burdening their departments with the time and expense of defending legal challenges.

So the legislative approach seems to be the best option on the table for dealing with the issue. Still, the ‘nanny state’ objection is persuasive for many.

Witness the reaction to Mayor Bloomberg of New York City over his proposed ban on soft drink servings larger than 32 ounces. He quickly became the butt of jokes from late night comedians and a lightning rod for those concerned with governmental intrusion into people’s daily lives.

But there is a critical difference between drinking too much sugary soda or having to buckle a seat belt on the one hand and texting or use a handheld cell phone while driving on the other. In the first two instances only one’s own health and safety is at risk. With texting and cellphone use everyone sharing the road with a distracted driver is at risk as well.