Coming Soon! A Mall Siesta Key can call its own! 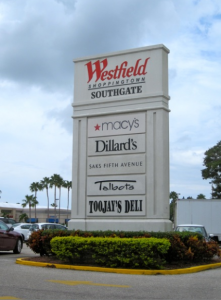 F. Scott Fitzgerald famously quipped that there are no second acts in American life. Well, Westfield Group – owners of Westfield Southgate Mall in Sarasota – must not have gotten the memo.

Second only to Sarasota’s tony St. Armand’s Circle in terms of upscale shopping appeal, the venerable shopping plaza turned mall seems poised to reinvent itself for no less than the third time in its 57 year history.

Plans were announced at this year’s International Council of Shopping Centers Convention in Las Vegas to transform the property into a “lifestyle/entertainment” center. Representatives of the Australian based company indicated construction would begin by year’s end.

There will even be a new name to herald the changes: “Westfield Siesta Key.”

What’s that you say? The center isn’t actually on Siesta Key? A minor inconvenience as it turns out. After all, Siesta Drive borders the mall to the north. And if you exit the parking lot onto that road and head west, Siesta Key is just minutes away (unless of course the north bridge happens to be up, turning Siesta Drive into a giant parking lot, in which case you may wish you had extended your shopping stay a bit). 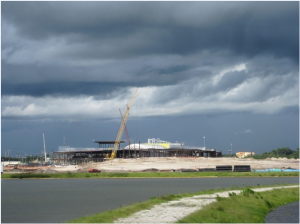 The changes would seem to be a calculated response to some cross-town competition. Benderson Development – in partnership with Taubaum Centers – began construction this summer on its new $350 million University Town Center Mall (UTC) at the southwest corner of I-75 and University Parkway. It is one of only two such enclosed malls currently under construction in North America. When completed in the fall of 2014, it will include over 850,000 square feet of retail space, making it one of the largest such properties on Florida’s West Coast.

Westfield’s other local mall, Sarasota Square, will still be larger, at least initially. According to Sarasota Square’s Eric Schneider that property is currently just over 1 million square feet in size. But the new University Town Center hopes to distinguish itself from the competition by attracting a decidedly more upscale retail mix than Sarasota Square. Already, Benderson has landed a Nordstrom Rack location across the street from UTC at its Shoppes of University Center property. Insiders note that the upscale Seattle based retailer often opens a rack location before bringing its flagship full service department store to an area.

Benderson has also lured Saks Fifth Avenue from Westfield’s Southgate property and rumors persist that other defections may follow.

As founder and President of American Property Group in Sarasota, Barry Seidel is plugged in to the ups, downs and trends of the local commercial real estate market. In a recent interview at his office on the south trial, he said he wouldn’t be surprised to see more moves.

“I’ve heard Williams Sonoma will be moving out as well,” he said. “Maybe they can attract a local business to fill that space. They’ll try to get another large retailer to fill the Saks space. That would be the easiest way to maintain their ROI (return on investment). But if they can’t get a good fit, the lifestyle concept could work, especially if it’s done right.”

Macy’s and Dillards remain at Southgate – for now. But many retail observers point out that with these two chains having committed to opening locations at the new UTC mall, it may be hard to justify maintaining two locations in such close proximity: just six miles apart as the crow flies.

The worst thing, says Seidel, would be for Westfield to bring in something that doesn’t fit in with the existing tenant mix.

“Synergy is important with centers like this,” he points out. “The mix needs to be right to drive traffic and keep retailers and restaurant operators happy.” He points to Westfield’s decision to bring Costco to Sarasota Square after Dillards moved out in 2009 as an example of a less than ideal solution to the problem of filling vacant space.

“Sure the space is filled, so they’re generating revenue, but what about the rest of the stores? Are they getting more traffic?” Many Costco customers are perceived to be “one-and-done” shoppers. They load up on merchandise at Costco but don’t necessarily shop the rest of the mall.

Seidel also points to the decision to allow Costco to sell food at its interior mall entrance as a negative for other tenants. “How would you like to be paying what some of these food court restaurants pay and then have Costco competing with you by selling hamburgers and hot dogs at their end of the mall?”

He adds that some mall restaurants have also complained about the lack of available parking near Costco since the giant discounter moved in, especially at the busy lunch and dinner hours.

Back at Westfield Southgate…soon to be “Westfield Siesta Key,” the Island connection might not be as far-fetched as it first sounds. As home to the area’s premiere tourist attraction, the sugar sand coated Siesta Key Beach, the Key is a magnet for upscale, well-heeled tourists with plenty of dollars to spend. The trend has only grown since Dr. Stephen Leatherman, aka “Dr. Beach” named Siesta Key the nation’s number one beach in 2011.

So it’s understandable that Westfield would want to leverage its close-in location to gain an advantage over Benderson’s UTC. “It’s a premiere property,” says Seidel. “No matter what happens – whether they stay focused on retail or blow things up and go in a different direction, that location will work to their advantage.”

That advantage received a boost earlier this month when Sarasota County approved a trolley route that will form a loop connecting Westfield Southgate Mall to various locations on the Key. Two busses will circle from the Mall across the north Siesta Drive Bridge, stopping first in Siesta Village, with additional stops at Siesta Key Beach and Turtle Beach before heading back to the mainland using the southern Stickney Point Bridge and retuning to Westfield Southgate/Siesta Key. Two busses running each hour will mean riders will be able to get on or off the Key at half-hour intervals. No date has been announced for when the new service will begin.

The County decision to add the trolley to Siesta Key is a rare recent victory for Westfield over its crosstown rival. The other route under consideration would have connected downtown Sarasota with Benderson’s UTC and the new rowing facility at Benderson Aquatic Park, which was recently named the host venue for the 2017 World Rowing Championships.

At the time of the Las Vegas Shopping Centers Convention, William Hecht, Westfield’s Senior Vice President of development pointed out that Southgate was a “dated” center in need of an update, regardless of competition from UTC. Adding entertainment and restaurant options in an open-air, walkable configuration is more in keeping with recent shopping center development trends than the enclosed mall concept embraced by Benderson, a concept that has dominated the industry since the early 1960s.

Southgate opened in 1956 and was originally called South Gate Shopping Plaza. For its time, it was a state-of-the-art strip center. In a sign of just how much things have changed, there were two grocery stores at opposite ends of the plaza when it debuted, something rarely if ever seen today. Back then, Winn Dixie was the dominant player in the grocery store space and Publix the upstart. No longer. “Publix now develops many of their new stores on their own,” points out Seidel. And often, they are the only major tenant, preferring to not even share their new locations with drug store chains, as was the model throughout much of the ‘80s and 90’s.

In addition to the two grocery stores, you also had a Woolworths, a Grants and even a bowling alley, the latter giving the center an entertainment component in1956 that foreshadowed the entertainment/lifestyle theme Westfield has seemingly embraced for the property’s future.

The company does have experience with the lifestyle model. At its Westfield Broward location in Fort Lauderdale, it has recently added a new movie theatre and additional restaurants to the food court.

A movie theatre might be considered as a replacement for the current Saks Fifth Avenue space when the upscale retailer moves to its new, larger space in UTC next year. A Muvico or dinner-and-a-movie location where food and drinks are served along with the featured film would be a first for this area and dovetail well with the entertainment theme.

As Seidel points out, “A walkable, pedestrian friendly space with a variety of entertainment choices…there’s something appealing about that. It reminds me of a time when we knew our neighbors and talked to one another on the street. We could use more of that.”

Whatever direction Westfield goes, the local retail landscape is clearly in for some dramatic changes in the near future. As Benderson moves forward with what many consider to be an aging model, that of the enclosed Mall, Westfield may be heading back to the future with a pedestrian friendly outside shopping destination that harkens back to an earlier, simpler time.

Unlike many corporate strategies that unfold out of public view, local shoppers will have a ringside view of which company has made the better bet.