A Bubble for your Thoughts..
Do New Rules Miss the Reality of Today’s Real Estate Market? 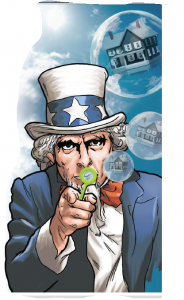 disarmingly obvious you might find yourself smiling in amusement upon reading it for the first time.

“The Consumer Financial Protection Bureau is issuing a final rule to implement laws requiring mortgage lenders to consider consumers’ ability to repay home loans before extending them credit. The rule will take effect on January 10, 2014.”

That’s right. Soon lenders will actually be required to give some thought as to whether-or-not mortgage customers have the wherewithal to pay back the money they borrow. As our cousins across the pond might say: Brilliant!

But all joking aside, re-stating what should be obvious is perhaps a necessary starting point given the abuses leading up to the great real estate boom and bust of 2005-2007 and the even greater recession that followed. And there’s little sympathy to be found for the lending industry that helped steer the economy onto that rocky shoal where it has foundered for years now. Many would argue it has only itself to blame for its double-secret-probation status and forced exile to the regulatory equivalent of a kindergarten classroom, where scissors and other sharp objects have been removed and behavior is closely prescribed and even more closely monitored.

Yet with the ability to qualify for loans now anything but easy, the question becomes one of whether or not the new regulations will make much of an impact. Some fear they will cause the mortgage application process to become even more difficult as lenders tighten standards further for fear of possible statutory sanctions resulting from any failure to fully comply, whether intentional or not. First time homebuyers and those with anything less than stellar credit will be the most adversely affected by any tightened standards. All of which has many in the housing industry concerned for what they see as nascent signs of a modest, though still fragile recovery in both the real estate market and broader economy as a whole. Indeed, realtor.com reported just last week that nationwide, homes in February sold at the fastest clip in over six years. The average time to sell a home fell from 123 days in February of 2011 to 98 days in the same month this year.

Lew Sichelman writes a nationally syndicated column titled “The Housing Scene’’ that runs in some of the nation’s largest newspapers, including the Los Angeles Times and the Chicago Tribune. In a phone interview last week, he explained that while he supports the new rules and the bureau’s efforts, he is somewhat skeptical about their impact, especially over the short term. “Lenders are already very, very conservative,” he said. “And until all the rules are on the table and understood, they’re going to remain conservative.”

That conservative approach marks a180 degree course correction from the mania of the early years of the last decade when all a borrower had to do was “fog a glass” to qualify for a loan.

“Back then,” says Sichelman, “the thought (among lenders) was houses are going to increase, so it doesn’t matter if they have the ability to pay their loan back or not. If a house is worth $200,000 today and the borrower goes under in six months, it’s going to be worth $250,000 and we’re going to get our money back and then some.”

Such was the mindset. And it was shared by almost everyone, almost everywhere…and seemingly all at once.

But as we all now know, somewhere along the line, that good-time script, with its happy ending got rewritten, and not just in isolated markets, but for the nation as a whole, though some regions (including states like Florida, Arizona, Nevada and California) were certainly hit harder than others.

Leading up to the bust, it was taken as an article of faith among lenders that a diversified loan portfolio (across regions and income classes), along with continued housing price appreciation in most areas (even if some fell back) would limit any downside risk. Combined with the Federal Reserve’s loose monetary policies in response to the bursting of another bubble, the dot.com one, and also the aftermath of the 9/11 attacks, the table was set for a feeding frenzy for market share among the major lenders. It was like a replay of a 19th century gold rush with all the players racing to stake their claims for the easy money everyone saw as being there for the taking.

“A company like Countrywide, with their desire to hold market share and remain the number one lender in the face of all this…that is what brought them down, because they started making all kinds of crazy loans just to keep up with everybody else,” said Sichelman. 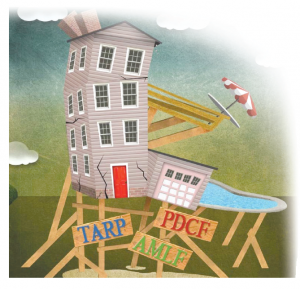 precipitous collapse of the tech-heavy NASDAQ in 2000-2001 had by 2005 taken up full-time residence in the housing sector. And when investment banks began heavily promoting the securitization of mortgages, where large numbers of loans were bundled together, divided into shares and sold to investors, the appealing, almost hypnotic perception took hold that such new and untested investment vehicles would somehow magically remove risk from the market.

“Because they could package them up with Moody’s, Fitch’s and Standard and Poor’s blessing, as AAA rated, they (investment banks) could sell them (securitized loans) to investors including municipalities and even governments and really spread what was our bad real estate market throughout the globe,” said Jack McCabe a Real Estate consultant and analyst based in Deerfield Beach, Florida during a recent interview for this story. “There are so many steps and so many parts to this perfect storm, but to me what it all comes back to is egregious greed,” he continued.

Large insurers, notably AIG, sought to squeeze even more risk out of the trading of these mortgage securities by sprinkling their own brand of pixie dust over them. Called Credit Default Swaps, for a modest premium these instruments would pay buyers in the event of any unlikely (or so it was thought) default.

But with all the irony of a Shakespearean tragedy, as the perception grew that risk had been all but banished from the kingdom, it was actually increasing exponentially on all sides, with epic consequences soon to be revealed. The whole economy was on the brink of what author Nassim Nicholas Taleb refers to as a “Black Swan Event,’ defined as a rare occurrence beyond the realm of normal expectation, often with wrenching, unforeseen consequences.”

The name “Black Swan” comes from the longstanding belief that swans could only be white…a notion that was dispelled in the late 19th century when a black swan was discovered in Australia. The common characteristics shared by all such events are that they seemingly come out of nowhere and their effects are dramatic, often earth shattering in terms of the shift in world view they bring with them. The 9/11 attacks are an example. As was the Great Depression of the 1930s. And now, the financial meltdown of 2008, built on the assumption that the housing market could only go up, and that risk was now a thing of the past.

Of course, we’re wiser now, right? It’s safe to get back into the water, isn’t it?  We’ve adopted new rules to avoid the mistakes of the past…haven’t we?

But the new rules coming from the Consumer Financial Protection Bureau seek to instill a measure of temperance among lenders that the industry has itself already exceeded by several orders of magnitude.

“Now we’ve gone from the North Pole to the South Pole, to the point where it seems the banks are trying to find ways not to make loans as opposed to make them,” says McCabe. “Even doctors and attorneys with long term relationships with lenders are having a hard time getting a mortgage,” he points out.

The world has changed. New paradigms have brought new challenges, while those of the recent past recede from view.

With tight lending practices limiting the pool of available mortgage applicants, cash is now king, especially here in Florida where many recent retirees selling homes up north are able to buy their new homes here outright. Cash buyers also include large private equity funds like the Blackstone Group LP that has recently been coming into communities and buying homes in large numbers, 276 in Sarasota and Manatee Counties alone since October. The long-term implications of such large scale buying are unknown. Still, McCabe is worried:

“Corporations could have enough real estate holdings in concentrated areas to literally manipulate the market and manipulate prices. That’s what I’m really concerned about and I’m starting to see that happen already because instead of buying at bargain basement prices, some of the things they’re buying now, they’re drastically overpaying for, without a doubt in my mind.”

Why, would they pay more than they have to? McCabe suggests that by pushing prices up in an area such large syndicates stand to reap greater rewards in the future with higher prices when it comes time to sell. It’s the flipping mentality all over again, but potentially on a much greater, corporate sized scale.

Another unpleasant scenario: imagine one of these large syndicates buying up the majority of homes in your neighborhood. They could then effectively control community standards, especially if there’s a homeowner’s association in place that they would now control by virtue of owning a majority of the homes in the subdivision. Combined with the ability to influence prices by timing when they buy or sell, individual homeowners could find themselves out in the cold when it comes to influencing the direction of their communities and protecting their equity.

If Black Swan events like the financial collapse of 2008 are by definition unforeseeable, how do rules and regulations written for some other time and place address circumstances as yet unseen? The history of bubbles and manias, recent and long past, would suggest that greater regulatory attention and resources should be focused on what’s happening right now as opposed to the transgressions of the past.

There’s a saying that comes to mind: it’s the mosquito that’s not buzzing that you should be worried about.