The Sarasota County Sheriff’s Office has charged a Sarasota man with Aggravated Battery with a Deadly Weapon in connection with the alleged Sept. 5 shooting of a person with a pellet gun in Siesta Village, the office has reported.

The incident occurred in the 5200 block of Ocean Boulevard, at the intersection of Canal Road near the Village gazebo, according to information from the Sheriff’s Office. 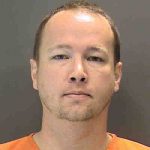 His arraignment was set for Oct. 6, according to records in the 12th Judicial Circuit Court.

A pellet gun “has more than enough velocity to break skin if shot at a person,” the report explains. “[S]hould the projectile hit a location where an artery is located it could cause death,” the report adds.

No address was given for the victim on the Sheriff’s Office report. The initial 911 call about the shooting came from a bystander about 8:20 a.m. on Sept. 5, the report says.

When deputies spoke with the 43-year-old victim, the report adds, he informed them that he had been standing on the street, arguing with a man in a second-story apartment located at 5208 Ocean Blvd.; that is above the Big Olaf ice cream shop in the Village. The victim said he heard two shots, “which sounded like metal hitting metal,” the report continues. Then a third shot hit the victim in the left side of the chest, the report says. Paramedics were called to the scene, a news release notes, but the victim refused treatment.

A bystander who was in front of Meaney’s Mini Donuts — about 50 feet from where the incident occurred — told deputies that he initially heard “3 pops (two consecutive and one just after),” the report says. He looked up toward the second floor of the Big Olaf building and saw a male in a window, according to the report. The bystander described the sounds as those produced by a BB or pellet gun, the report notes.

While the deputies were conducting their investigation, the release continues, Andrews identified himself as the person in the apartment with whom the victim had been arguing.

Andrews did consent to a search of his apartment and vehicles, the report says. During their search, Sheriff’s Office personnel found a pellet rifle inside the one-bedroom efficiency apartment, the report adds. A large scope was affixed to it, the report continues; next to it was an aluminum canister containing pellets made out of lead. “The inside angle of the window gave a clear view of the stop sign, bus stop sign and the location [where the victim had been standing],” the report adds.

Continuing concerns about the gazebo

Since last summer, homeless people have been gathering off and on in the gazebo, Siesta residents have reported. Sheriff’s Office personnel have reminded the public that homeless people on the island must be treated the same way any other person is treated. However, representatives of the Sheriff’s Housing Initiative Facilitating Transient Services (SHIFTS) and The Salvation Army have provided outreach to people on the island over the past year, Sgt. Jason Mruczek, who leads the Sheriff’s Office substation on Siesta, and other law enforcement officers have pointed out in community meetings.

Nonetheless, on May 17, during the Siesta Key Chamber of Commerce’s quarterly session for members, Michael Shay, the Siesta Village Maintenance Corp. manager, reported that he once again had been routinely observing homeless people sitting for periods of time in the gazebo and sometimes engaging in behavior that disturbed tourists who also take the opportunity to sit on the benches in the structure.

It seems that one group of homeless individuals lingers in the gazebo over a period of time and then apparently moves on to another location, he added. “All of a sudden,” Shay said, “we have new ones … What I’m seeing in the Village itself is a turnover [of homeless people].”

For example, he noted, one person had been sleeping on cardboard on the ground in the gazebo. Shay added that he saw the man at 5:30 that morning, when Shay was checking on the Village for the Maintenance Corp. “He is new.”

Later that morning, Shay pointed out, two men were sitting on opposite sides of the gazebo when a couple came in with doughnuts and sat down to eat them. The homeless men tried to strike up a conversation with the couple, Shay said, and the couple left.

“We try to refer people to places if they want [help],” Mruczek explained of the homeless individuals with whom SHIFTS representatives speak. While some individuals choose to accept the assistance, he added, “they don’t have to.”

“There was one gentleman who was sleeping on the beach for a while,” Mruczek continued, and that man finally decided to go to The Salvation Army facility in Sarasota.

Sheriff’s Office personnel do try to keep an eye on activity in the gazebo as much as they can, he said.

None of the activity he observed between the men and the couple that morning appeared to be of a criminal nature, Shay responded. It appeared to be more of a situation in which the couple with the doughnuts felt “they were being hassled.”

“I know you can’t do anything about that,” he told Mruczek.