The crux of the matter was the process, a Sarasota County staff member and the past chair of the County Commission explained during the board’s regular meeting on Jan. 10, and that was exactly what Commissioner Nancy Detert said she did not like.

Detert was the sole commissioner to vote against allowing staff to go ahead and process two privately initiated Comprehensive Plan amendments outside the normal May cycle for such work.

One of the amendments ultimately could allow redevelopment of existing Commercial General (CG) property on Siesta Key for a hotel. Several speakers — including a past County Commission candidate — protested any county action that could lead to such new development on the barrier islands. Representatives of Dr. Gary Kompothecras, a Siesta Key resident, held a community workshop on Dec. 7, 2016 on that proposed amendment.

The other proposed amendment, according to a staff memo, relates to 18 acres located on the northeast corner of River Road and U.S. 41.

“We have two projects here and no details on the projects,” Detert pointed out during about 15 minutes of discussion. “It’s like we’re putting a qualifier in first, and then the project’s going to come in later and look a lot better than it would have looked without this.”

However, Matt Osterhoudt, interim director of the county’s Planning and Development Services Department, explained that the only questions before the commissioners that morning were whether to allow the two proposed Comprehensive Plan amendments to be processed earlier than the county schedule dictated. “Today’s conversation is not about the merits of [either] proposal.”

Any petitioner may send a letter “at any time” to the Planning and Development Services Department director, asking that a Comprehensive Plan amendment be considered outside the May cycle, Osterhoudt continued. If the director determines that staff would be able to handle the work, he said, then the director asks the County Commission whether it wants to allow that out-of-cycle process to go forward.

“At this time, we don’t have any application in house to do a technical analysis,” he added. “This is purely a matter of process.”

If the board gave its approval for the out-of-cycle work to begin, he explained, then each petitioner first would have to file a formal application with the county, and the county’s Development Review Committee would begin analyzing it on its merits. If the committee members agreed the amendment could go forward, the next step would be a public hearing before the county’s Planning Commission, Osterhoudt continued. The Planning Commission’s recommendation then would go to the County Commission, which would hold a public hearing on the request. If the County Commission agreed to the amendment, the language would be submitted for review by the Florida Department of Economic Opportunity, as required by state law.

“We have found,” Osterhoudt said, “that we have … at this time adequate resources to proceed out of cycle” on the two proposed privately initiative amendments.

Detert told her colleagues, “I have trouble understanding why we want to change our ordinance before we get the details of the project.”

In years past, Commissioner Alan Maio began, if a person missed the cycle for a Comprehensive Plan amendment, the person “would have to wait a whole other year.” Past County Commission members agreed that that way of handling the amendments “put the burden on our staff of doing everything at once.” Therefore, Maio continued, the commissioners decided it would be better to allow the issues to be taken up as they were submitted, as long as staff said it could handle the work.

“Maybe we need to change the process,” Detert said. “It looks like we’re constantly changing our Comprehensive Plan. But we’re really not. … I don’t see any urgency on either of these projects. I’d rather be able to vote on a project when I hear the details on what the project is, rather than vote for an amendment to our Comp Plan and then see a project.”

If the petitioner was not ready to give the board all the details that day, Detert responded, “pushing [these amendments] to May shouldn’t hurt [them] at all.”

Moran made motions to authorize the out-of-cycle staff work on both proposed amendments. “I just think there is going to be plenty of time for public input on this.”

Maio seconded the motions, which passed 3-1. (Commissioner Charles Hines had not arrived for the meeting by that time.)

Because the agenda item regarding the amendments was for discussion only, several speakers addressed the board during the Open to the Public period early in the meeting.

The first one, Lourdes Ramirez, identified herself as president of Siesta Key Community, which has a Facebook page on island issues. Ramirez opposed Maio during the 2014 County Commission election for the District 4 seat, and she was one of only a dozen members of the public who attended the Dec. 7, 2016 neighborhood workshop held on Siesta Key regarding the proposed Comprehensive Plan amendment put forth by Siesta Acquisitions LLC. (According to the Florida Division of Corporations website, the manager of that entity is Kompothecras; he is best known for his “1-800-Ask-Gary” advertising for medical referrals to his chain of chiropractic clinics.) 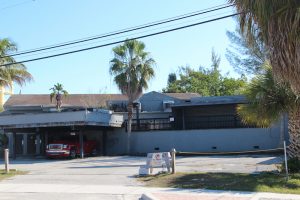 The Siesta Key Overlay District already allows hotels with up to 26 units per acre and — with approval of a special exception — up to 85 feet in height on the island, Ramirez explained. “So the real intent [with the amendment] is just to increase the density and intensity of use on Siesta Key.”

The island’s accommodations typically are filled to capacity from February through May, she continued; however, that is not the case the rest of the year.

Furthermore, Ramirez told the board, negative comments about Siesta Key on TripAdvisor reference traffic congestion and lack of parking spaces at the beach and in Siesta Village.

Applause broke out in the Commission Chambers after she concluded her remarks.

A second person, Gene Wulf, who lives in the Marina Del Sol condominium complex on Old Stickney Point Road, told the board he and his neighbors had settled on his being the spokesman for the group. “We do not believe our neighborhood needs any additional transient housing,” he continued.

Among the three Commercial General sites where a new hotel could be built on Siesta Key — if Kompothecras’ Comprehensive Plan amendment were approved — is one encompassing about 11 acres on Old Stickney Point Road. The others are about 16 acres in Siesta Village and a parcel of about 2 acres occupied by a Wells Fargo bank on Midnight Pass Road.

“Traffic on the island is already extremely heavy,” Wulf pointed out, and a new hotel would exacerbate that situation.