The reason the Florida Department of Environmental Protection (FDEP) agreed to extend by 30 days a decision on its next step in the Lido Renourishment Project permit process was because staff wanted more time to review a specific document and it sought additional information about the proposed seagrass mitigation plan.

Therefore, the City of Sarasota and the U.S. Army Corps of Engineers (USACE) issued a waiver on Sept. 1 that set an Oct. 1 deadline for FDEP to decide whether to release a third Request for Additional Information (RAI) or to conclude that it has all the material it needs about the application, Sarasota City Engineer Alexandrea DavisShaw told the SNL.

When SNL sought more details from FDEP, spokeswoman Dee Ann Miller replied in a Sept. 15 email, “I have no additional updates at this time.”

In June, Sarasota city leaders talked about their expectation that FDEP would issue a permit this fall to the city and the USACE to allow the dredging of Big Sarasota Pass to renourish Lido Key.

Late on Aug. 1, the USACE submitted its latest response to FDEP’s second request for information on the proposed Lido project. Under its rules of procedure, FDEP had 30 days to respond. Within eight days of the Sept. 1 deadline for that action, two key events occurred.

First, the Sarasota County Commission voted unanimously on Aug. 23 to ask the USACE to withdraw its 2015 Finding of No Significant Impact regarding the Lido Renourishment Project and, instead, to pursue an Environmental Impact Statement (EIS) with a much more thorough review of potential negative consequences of dredging Big Pass, as well as alternatives to that plan. In a July 14 letter, the Siesta Key Association (SKA) asked the commission to call for an EIS.

The USACE had not responded to the county by Siesta Sand’s deadline for this issue.

In addition to its request to the USACE, the commission sent a letter to FDEP, noting that the documents the USACE submitted on Aug. 1 called for a staging area in the county’s Ted Sperling Park on the southernmost point of Lido. Commission Chair Al Maio wrote, “Neither the [USACE] nor City of Sarasota has contacted the County to seek authorization for this use. It is the County’s expectation that the FDEP evaluation of the materials submitted on August 1, 2016 will include a requirement for the [USACE] or City of Sarasota to obtain authorization prior to moving the [permit application] forward in the review process.”

The county letter was not the only document FDEP received close to the Sept. 1 deadline. Catherine Luckner, second vice president of the SKA, pointed out that FDEP’s Lido project file showed the receipt of an Aug. 30 letter from Charlie Hunsicker, director of Manatee County’s Parks and Natural Resources Department. It documented that county’s “intentions to enter into an agreement with the City of Sarasota and [the USACE] to provide compensatory seagrass mitigation at the County’s Rookery at Perico Seagrass Advance Mitigation site to offset proposed impacts from the [Lido Renourishment] Project.”

Hunsicker’s letter added that the specific amount of acreage “has not been formally determined and is pending assessment by FDEP.”

He also noted that his department would recommend to the Manatee County Commission “that [Manatee] County move forward with establishing an agreement between the parties that details the responsibilities of each party and the financial terms associated with the sale of the right to implement seagrass establishment at the Rookery at Perico.”

That approval is anticipated during the Manatee board’s Sept. 27 meeting, Hunsicker added.

Concerns about the seagrass plan 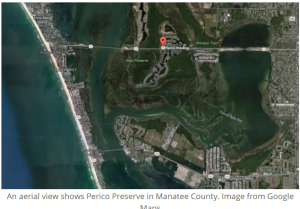 Both the SKA and Save Our Siesta Sand 2 have raised issues about the seagrass mitigation plan. Luckner explained that the SKA has objected to the use of Perico Preserve partly on the basis of the plan’s noncompliance with an FDEP regulation calling for homogeneity of a mitigation site with the seagrass areas that will be destroyed by a project.

Research she and her husband, Bob — an SKA Environmental Committee member — have undertaken, Luckner said, also shows that Perico Preserve is “a borrow pit area that doesn't have any direct access” to Tampa Bay and the Gulf of Mexico. She added, though, that Manatee County is dredging a channel to allow the flow of water into the preserve.

A press release Manatee County staff issued in May says the 176-acre Perico Preserve is located on the north side of Manatee Avenue, east of the Anna Maria Bridge and Neal Preserve. “In the center of the preserve’s 16-acre seagrass habitat is a specially designed rookery island intended to serve as a nesting site for wading birds,” the release adds.

In its August letter to FDEP commenting on the USACE’s response to the state’s second request for additional information, Martha Collins, the attorney for SOSS2 pointed out, “Seagrass mitigation does not always work.” In some instances in regard to the Lido project, she argues, the USACE has failed to consider area-wide consequences, “even claiming there will be no impacts to seagrass beds as [those] fall outside a zone of potential impact.’"

Yet another document FDEP received in the latter part of August points to concerns about other species that could be adversely affected by the dredging of Big Pass.

On Aug. 19, Ann Harvey Holbrook, staff attorney for Save the Manatee Club, wrote FDEP, noting that the Florida Administrative Code says, “No project may be permitted which would impair the growth and reproduction of resident species, including species and communities based on seagrass ecosystems.” Therefore, she continued, before FDEP issues a permit to the USACE and the City of Sarasota, “an updated benthic resource survey should be conducted and made available to the public.”

“Benthic” refers to the lowest level of a body of water, including the sediment surface and some sub-surface layers. Organisms living in that zone — including crustaceans — are called the “benthos”; they are an important part of the food chain, research shows.

Luckner of the SKA has told SNL of a related concern. The response the USACE submitted to FDEP on Aug. 1 says the plan is to place 950,000 cubic yards of sand on a 1.6-mile stretch of South Lido Key Beach. However, the proposal calls for dredging almost 1.2 million cubic yards. The project description from the USACE accounts for the difference by referencing “losses from borrow area to beach template due to the nature of dredging work.”

In other words, Luckner said, about 26 percent of the sand is expected to be lost in Big Pass. She has questioned how much the “losses from borrow area” in the water will diminish the amount of sunshine that streams through. That situation, she added, could lead to negative effects on the aquatic food chain.