Questions about traffic access and queuing, dumpster placement and even the circulation of a Venice newspaper came first, but the Sarasota Planning Commission finally gave unanimous approval to a proposed infill project on Stickney Point Road across from the entrance to Sarasota Pavilion. 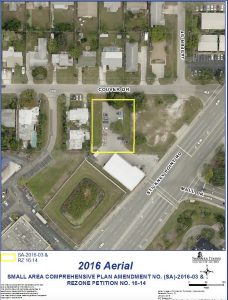 Planned by the American division of an Ontario firm, the project entails a new commercial center with a restaurant and drive-through window, as well as two smaller retail spaces, on a triangular parcel adjacent to Couver Drive. However, as county Planner Jack Wilhelm made clear during the Planning Commission’s Sept. 15 meeting, the only part of the project on which the board was being asked to vote was a rectangular segment comprising 0.41 acres behind the existing Firestone Complete Auto Care Center at 2121 Stickney Point Road. That rectangle encompasses the parking area for the commercial space and part of the drive-through route for the restaurant.

Officially, the applicant is seeking an amendment to the county’s Future Land Use Map in the Comprehensive Plan to change the designation of the property from Medium Density Residential zoning to Community Commercial Center. The second part of the application seeks the rezoning of that segment of the site from residential to Commercial General.

The application submitted to the county earlier this year says the restaurant will be a 50-seat Dairy Queen. It is proposed to be in the largest of the three commercial spaces, at 2,500 square feet.

Wilhelm told the Planning Commission members that the Firestone car care center will remain as it is. The project will include new sidewalks along Couver Drive and Stickney Point Road. Stormwater capacity will be provided aboveground and in an underground vault beneath the parking lot, he noted.

Because of a previous special exception granted to the part of the property proposed for the petitions, he said, no access can be allowed from that area to Couver Drive. Therefore, a new access point will be aligned with the Jasper Street intersection on Couver Drive.

“It is, I think, a perfect infill situation,” James W. Herston of Port Charlotte, president of Herston Engineering Services and the representative of JC Group USA, told the board. “There may be some little tweaks with a couple of the retail areas, but [the president of JC Group] is pretty well set on this is what’s going to be built.”

The County Commission is scheduled to hold a public hearing on the project on the morning of Tuesday, Nov. 22, in downtown Sarasota, according to county spokesman Drew Winchester.

When Commissioner Robert Morris asked about dumpsters on the property, Herston replied that the ones on-site already are up against a wooden fence behind the parking lot.

“I’m just trying to be sensitive to dumpsters and dumpster noise,” Morris added. “I’d like [the project] to be an improvement to the neighbors and not a detriment …” An aerial map showed two houses directly behind the fence. Herston pulled out a 3D model he had created for the proposal; it showed dumpsters closer to the Firestone building.

When Chair John Ask then noted that no one had signed up to speak during the public hearing, Commissioner Jack Bispham said, “I can’t understand why they’re not here tonight.”

Material submitted by the applicant showed that only two people attended an April 6 community workshop on the application, which was held at Gulf Gate Library. “The biggest concern expressed by the two (2) attending residents was related to knowledge and information on the project,” says a letter from Herston.

Earlier, Morris had asked Wilhelm about the fact that backup agenda material showed that the advertisement for the public hearing appeared on April 2 in the Venice Gondolier. “I don’t think that that newspaper comes up into this area.”

Later, county Planning Manager Tate Taylor confirmed that the county ran its advertisement of the hearing in the Sarasota Herald-Tribune. The policy calls for a notice to appear in a “newspaper of general circulation in the county,” Taylor added. “I do think that the interpretation of that is fairly broad, especially using the word ‘general,’” Taylor said. “I believe that the Venice Gondolier meets that [requirement].”  An online search found that the Gondolier circulates approximately 13,500 copies twice a week — Wednesdays and Saturdays. It is owned by the Sun Coast Media Group.

Herston told the board he put an ad in the Gondolier after checking with it and the Herald-Tribune. The Venice paper had lower rates, Herston explained, and when he asked whether it is a newspaper of general circulation, the person he spoke with assured him that the Gondolier runs ads all the time regarding Sarasota County zoning petitions.

Assistant County Attorney David Pearce pointed out that an inquiry could be made of the Gondolier regarding its circulation area. Newspaper staff could provide an affidavit stating that it is a newspaper of general circulation, he pointed out. Taylor acknowledged that the Gondolier is not a daily publication. Most of the time, he added, county staff suggests applicants advertise in the Herald-Tribune. According to the Alliance for Audited Media, the daily circulation of the Herald-Tribune is 54,274.

Bispham also was concerned about traffic on Couver Drive. “I go up and down that [street] frequently,” he said. “It’s a shortcut, and I imagine those residents get [angry] every time I do it. … I just can’t imagine that those two residents are not here,” he added of the people who live to the west of the rectangular area that was the focus of the hearing.

“I use this cut-through all the time,” Commissioner Philip Kellogg added. “It’s not uncommon to have six to eight cars stacked up at the intersection of Stickney Point Road and Couver.”

Kwamena Sankah, a county traffic engineering, explained that even though a curb cut already exists on the property opposite Jasper Street, county staff would review the development plan to ensure it would meet the appropriate standards. County regulations require that a driveway be at least 150 feet from a local road, he pointed out, and that access from Couver would not meet that stipulation. Still, Sankah said, the county could grant the developer a variance.

Herston pointed out that when he met with county staff members in late January, they told him the new driveway would have to be aligned with Jasper Street or offset from it by a minimum of 150 feet. That offset would conflict with the special exception regarding access to Couver, he added, so the design he and JC Group USA had opted for was the Jasper Street alignment.

Finally, Morris told his colleagues he was in favor of the project. “I think we’ve kind of beat this to death. … It seems to be an appropriate request. There isn’t any major change, really, from the current use.” “I support it,” Commissioner Ron Cutsinger added. “It makes sense.”