With Chair Alan Maio having made the motion, the Sarasota County Commission voted 4-1 on Nov. 8 to implement new impact fees for seven different types of services at the 100% level, effective April 1, 2017. Commissioner Carolyn Mason was in the minority on the decision, which followed a public hearing that had been continued from Sept. 6.

Staff had recommended the board phase-in the new fees at the 80% level this spring, followed by the 90% level in 2018, making April 1, 2019 the date the full, legally defensible amounts would become effective. That was based on discussions with “the affected stakeholders,” Matt Osterhoudt, interim director of the county’s Planning and Development Services Department, told the board.

“You’re going to cost the taxpayers of Sarasota County millions of dollars [by phasing-in the fees],” Sarasota attorney Dan Lobeck, president of Control Growth Now, said during the hearing.

He asked staff members what that figure would be, Maio said, and was told it would be almost impossible for them to provide an answer. “At this point, our community needs an awful lot of things,” he continued; yet, the residents “would shoot [the] five commissioners … if they would dare raise the millage rate …”

Impact fees, he added, are one means of paying for infrastructure and services that will be necessary as the county adds more residents over the 10-year period in which the fees are expected to be in effect. Moreover, Maio said, “I do not find this to be a burden [to developers and home builders].”

Although Vice Chair Paul Caragiulo acknowledged that he still was “not as confident as I would like to be” with regard to the justification for charging impact fees for general government services, he explained that he wanted to support the motion to show unity among the board members on a significant policy decision. Ye, when he called for the vote, Mason dissented.

Prior to that vote, Commissioner Christine Robinson made a motion just calling for implementation of the new fees without any decision regarding phasing. County Attorney Stephen DeMarsh advised the board that it could take such action, but, ultimately, it had to act on the effective date or dates. Mason seconded Robinson’s motion, and it passed unanimously.

Robinson pointed out that she understood how hard impact fees were to deal with during the Great Recession. She had told representatives of construction and home-building firms that the board did not want to cause them more problems, she added, by updating the fees until after an economic recovery was underway. “Now is the time we need to fix this,” she said of the decade-old fee schedule. “I think [this] has been long overdue. We’re getting to a better place [in regard to the local economy].”

Both Robinson and Maio did comment on the difficulty of dealing with the community’s need for affordable housing and updated fees. “The two don’t go together,” Robinson said.

Maio referred to a chart Osterhoudt had shown the board earlier. At the request of the commission during the Sept. 6 public hearing on the fees, staff had added in two more categories of size for single-family dwellings and three more for multi-family structures.

“And this is a commission that is pursuing, I think, rather aggressively, affordable housing,” Maio said. “I just find the numbers a bit surprising.”

In response to one issue Caragiulo raised on Sept. 6, Osterhoudt explained that the general government fees can be applied to administrative buildings, fleet maintenance facilities and equipment needed to provide services to residents. Eight other counties in Florida charge those fees, Osterhoudt added. Among them are Charlotte, Palm Beach, St. John’s and Martin counties, according to a chart Osterhoudt showed the board.

In a related matter, Caragiulo questioned consultant Clancy Mullen, president of Duncan Associates in Austin, Texas, about an issue constituents had brought up: that the figure Mullen had used in determining the cost of future facilities was $360 per square foot.

Mullen explained that when he began the update of the seven impact fees addressed in the study, the only data available regarded the expense of four fire stations. County staff advised him, Mullen continued, that those figures “were reasonably consistent with what the county would pay for other types of buildings.”

Mullen added that he would have preferred to have figures representing the expenses of a broader array of structures, but the key is the cost of a building itself; the land price is not factored into impact fee determinations.

During the public hearing, Michael Neal of Neal Communities — a member of the Board of Directors of the Manatee-Sarasota Building Industry Association — questioned whether the county has to construct new facilities that achieve national LEED recognition for energy efficiency.

Commissioner Robinson pointed out that her predecessor on the board — Commissioner Shannon Staub — was the champion of that philosophy. “I can’t recall a fire station or library that we’ve built that we haven’t sought [LEED certification] for,” Robinson said. 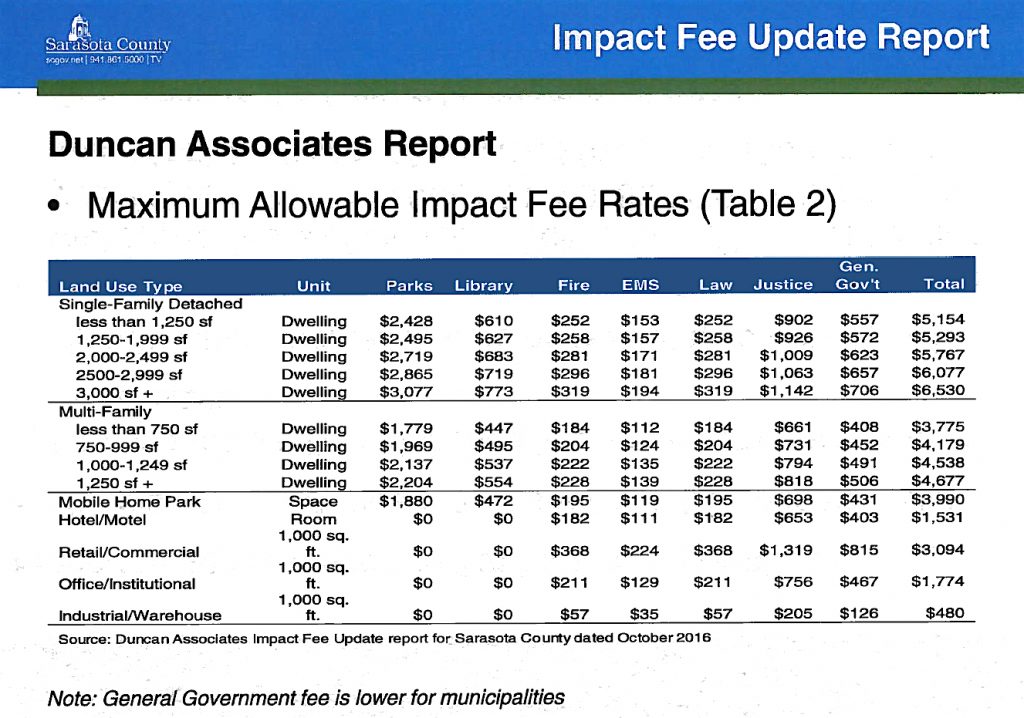 Siesta Key Village Association to be merged into Siesta Chamber as of Dec. 31

Condos flip the switch for a festive island

What’s new … beyond the bridges: June