The two areas most heavily damaged by the tornado that raced across Siesta Key, Little Sarasota Bay and parts of the Sarasota mainland during the early morning hours of Sunday January 17 both had names that proved eerily prophetic. 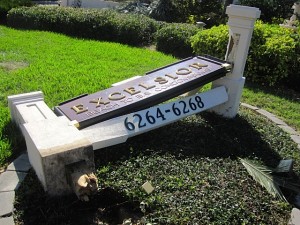 On the Key, The Excelsior Beach to Bay Condominiums took the brunt of the storm’s force, with the tornado’s ‘beach-to-bay’ track mirroring the descriptive language in the property’s full name. Then, after moving across the bay, its second landfall came at the western end of Baywinds Lane on the mainland, hitting with a ferocity far beyond the gentler winds the street’s developers likely had in mind years ago when the Pine Shores neighborhood was first conceived and that name was chosen.

Days after the storm had passed, a pile of debris along the Gulf dunes left no doubt where the F2 tornado with its 135 mph winds made its debut on the Key: at a point almost directly in line with the boardwalk that leads from the beach to the Excelsior.

Just to the south, windows were blown out and railings twisted like pretzels at the neighboring Crystal Sands Condominium. On the Monday morning following the storm workers could be seen boarding up windows while drapes and tattered screens danced with the breezes outside the units still awaiting repair.

At the Excelsior the damage was far worse. According to Sarasota County’s initial damage assessment completed just hours after the storm had passed, the westernmost building at 6250 Midnight Pass Road sustained ‘major’ damage, as did building five on the bayside which lost most of its roof. Guests and residents staying in those buildings were evacuated and relocated in the storm’s immediate aftermath.

Speculation as to when the buildings will be ready to be reoccupied varies widely, though most observers agree the gulf side units will be ready long before the harder hit building five. 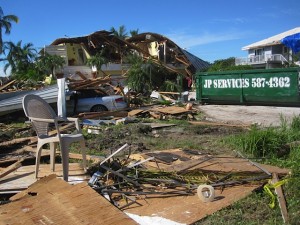 “I think it’s mostly safety issues with the building on the gulf,” said Walt Olsen, an Excelsior resident who also happens to be the outgoing president of the Siesta Key Condo Council. “There were railings that were bent or are missing, broken windows and some a/c units on the roof were bounced around a bit.”
“But the damage to building five was much worse,” he added.
“It (re-occupancy) will depend on whether any structural damage is found,” said Sarasota County Interim Building Official Kathy Croteau in a phone interview last week.
She explained that the Excelsior will need to hire a certified engineer to inspect the building for any damage beyond the obvious areas of concern and provide a roadmap for making the necessary repairs.

“They’ll submit an engineering analysis based on what they find and detail the steps proposed to repair the building,” she said, adding that the plan will need to conform to current building codes, not those in place when the building was constructed in 1981.
Croteau said the county will work with the ownership and their engineers to expedite the permitting process, but the safety of the structure is the primary issue.
“Three months might be possible,” she said, adding that it’s hard to say until the engineering analysis is complete.
For now, efforts are centered on preventing further damage by installing a temporary roof on building five. A forecast of rain lent an air of urgency to the work in the days following the storm.
Sarasota County’s preliminary damage estimate for the storm was $11.5 million for both the Key and the mainland.
Viewing that damage up close, it seems remarkable that no lives were lost here. Sadly, that was not the case in Duette, twenty or so miles to the northeast as the crow flies. There, a couple, Stephen and Kelli Wilson, died after their mobile home was struck by either the same tornado touching down again or a new one spawned by the same system.
Meantime, back on the Key, Tom and Susan Coliton were outside their corner unit of Excelsior’s building one on the Monday afternoon following the storm helping the cleanup crews clear away debris left by the storm. It was a cool crisp day, but the work was still enough for the retired couple to break a sweat.
Taking a break at one point Susan turned to her husband and asked, “Can I get you something to drink?”
Tom nodded yes, and as Susan headed off to grab some water for the two of them, he recounted the harrowing events of the previous day’s early morning hours with the humility of someone who had experienced something they wished they hadn’t.
Asked if he’d heard any alarms warning of the approaching tornado, he replied “No,” adding, “I didn’t need to. I heard the storm.”
He explained how he had awakened sometime between 2:30 and 3:00 a.m. to answer nature’s call. Afterwards, as he was returning to bed, it was a different kind of nature’s call that got his attention: the winds picking up outside and the driving rain pelting their unit’s exterior walls. “My God, the sound was like nothing I’d ever heard,” he said.
He roused Susan and the couple headed for the bathroom to ride things out.
“We got in the bathtub together,” he said. And held on for dear life…
“You could hear glass breaking…” and yes, “it sounded just like a freight train,” he said.
And then it was over. They were all right. But the couple, originally from Chicago, knew they had survived something more than just a bad thunderstorm. They have been coming to Siesta Key for years to leave the brutal Midwestern winters behind, so the irony of bad weather finding them here was not lost on them.
But their Midwestern values were not left behind.
Here they were, cleaning up, not just their unit – which received relatively minor damage – but helping their neighbors as well.Susan returned and handed Tom a bottled water.
He thanked her, adding with a smile: “That’s not the kind of drink I really need.”