Almost exactly five years ago, representatives of the Conservation Foundation of the Gulf Coast — based in Osprey — appeared before the Siesta Key Association (SKA) with a proposal for a pocket park on almost an acre of land perched on Big Sarasota Pass.

The property for years has offered a vista of the water and Lido Key, as drivers, pedestrians and bicyclists make their way to and from Siesta Village.

Community members had approached the foundation, President Christine Johnson said during that February 2012 meeting, hopeful that, if sufficient financial and philosophical support could be found, the land could be preserved for the public.

Yet, as opposition mounted from residents of the adjoining Windward Passage condominium complex, the initial enthusiasm for the idea ebbed. In early September 2012, Johnson stated that the foundation never gained the support it needed to forge ahead with the proposal.

Price was another factor, she pointed out at the time. The owner reportedly was seeking between $3.5 million and $4 million, and everyone the foundation contacted “thought that the price was too high,” Johnson said.

In August 2016, a new proposal for the land emerged: a six-unit luxury condominium complex called Oceane. If all goes as planned, the project will break ground in June or July, Peter Laughlin, a broker associate with Premier Sotheby’s International Realty, told the SNL. “We’re well underway with the final construction plan.”

This will be the first new condominium development on Siesta Key since 2009, he pointed out. One unit has been reserved already, Laughlin added. “It’s a great opportunity.”

On her website, SaraSellsSarasota.com, Realtor Sara Leicht writes of Oceane, “You will enjoy 374 feet of private prime Gulf front water with a view of the Sarasota downtown skyline and still [be] within walking distance [of] Siesta Key Village.”

Sarasota County staff approved the construction site plan on Nov. 30, 2016, Mark Loveridge, manager of the Land Development Services Division for the county, told SNL in a March 10 telephone interview. However, a building permit will have to be issued before dirt can be turned, he noted.

The developer is Crossgate Partners LLC, “a private real estate investment and development firm,” which built Bay Street Village and Town Center in Osprey; IOS by the Bay on Biscayne Bay in Miami; and Madeira Bay in Madeira Beach. The architect is Mark Sultana of the DSDG firm in Sarasota, Laughlin added.

On Jan. 13, Sarasota County Property Appraiser’s Office records show that MK Siesta Property LLC sold the three parcels that comprise the Oceane site to CG Oceane LLC for $4,785,000. According to the state’s Division of Corporations’ records, CG Oceane is an entity that Crossgate Partners established just days before the closing.

Crossgate is based in Suwanee, Ga., the registration application shows.

MK Siesta Property LLC was managed by Kevin D. Cogan of Louisville, Ky., who previously planned to develop the land, according to county records. 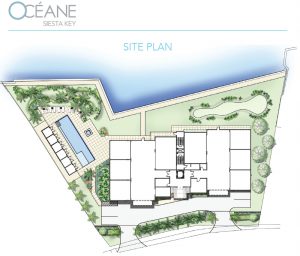 Each has been designed with “smart home automation, green building standards, expansive waterfront terraces and the highest-quality finishes,” plus an enclosed three-car garage and private poolside cabana, Laughlin added.

Asked whether he feels the controversy over the proposal to dredge Big Sarasota Pass to renourish South Lido Key has affected sales of the units, Laughlin replied that he has not seen any problems linked to that plan of the City of Sarasota and the U.S. Army Corps of Engineers.

He indicated “a lot of activity,” with people interested in the development.

If the dredging is allowed to proceed, he said, “it’s not going to have that big an impact.”

According to the site plan approved by county Planning and Development Services Department staff, the main building will encompass 10,621 square feet; cabanas, 586 square feet; and porches, decks, a pool and the parking lot, 7,956 square feet, for a total of 19,163 square feet.

The complex will cover 29.2% of the land, the document adds; the impervious part of the construction will be 49.9% of the total.

The Residential Multi-Family 2 zoning of the 0.88-acre site would allow 7.92 units instead of the six planned on three levels, the document notes. The physical address is 4750 Ocean Blvd.

Unlike builders of other recent new waterfront structures on Siesta and Casey keys, Crossgate Partners has not applied for a Coastal Setback Variance for Oceane; it did not need to do so. In March 2005, the County Commission granted one to a pair of developers for the property, county records show.

The resolution the board approved says the petitioners sought the variance for the demolition of existing multi-family residential structures, with plans for “a new pile-supported, three-story, multi-family residential structure, swimming pool, pool deck, cabanas/pavilion, stormwater retention area and the addition of approximately 2,400 cubic yards of fill to be brought on-site …” It added, “All proposed construction will be located a maximum of 44.3 feet seaward of the Sarasota Barrier Island Pass Twenty-Year Hazard Line” on the land fronting Big Pass.

In 2005, the petitioners were Icon Properties-Ocean Boulevard LLC and JDG Properties-Siesta LLC. Both, based in Louisville, Ky., are inactive, state Division of Corporations records show. Their last annual reports were filed in March 2009. The principal manager of each was Kevin D. Cogan of MK Siesta Property LLC, the records say.

County’s land development and zoning regulations to be updated and combined into single, user-friendly document

A passion for helping wildlife