Siesta Key condominium owners’ request for Sarasota County to eliminate 12 parking spaces on Beach Road — parallel to Siesta Public Beach — will be one agenda item the county’s Traffic Advisory Council (TAC) will consider at 2 p.m. on Monday, June 13, most likely in downtown Sarasota, John Sharp, a staff member in the Transportation office of the county’s Public Works Department, told SNL. Sharp is the liaison to the TAC.

After the TAC hears the matter, the council members will vote on whether to forward the petition to the County Commission. It can take up to a year after a TAC meeting for an issue to reach the commission, Sharp said, though, generally, it takes six to eight months. 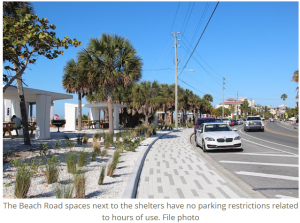 A petition filed with the TAC on April 20 by Robert D’Orsi, president of the Sunset Royale condominium association, explains that the 12 spaces are across Beach Road from the 34-unit complex. During the Nov. 10, 2015 County Commission meeting — as the board was considering whether to replace wooden picnic tables with new concrete structures next to those spaces — D’Orsi was one of several speakers who argued against any enhancements to the public beach that would draw more people to that particular area.

Citing the lack of restrooms on that end of the park — where improvements were still underway as part of a $21.5-million project — D’Orsi pointed out that he was receiving “lots of comments” from renters of Sunset Royale condos about noise emanating from the picnic tables at night.

Moreover, he explained, cars sometimes stay in the 12 spaces for days, as no restrictions are imposed on parking there — a fact confirmed by the Sarasota County Sheriff’s Office. D’Orsi talked of people changing in and out of swimsuits in their vehicles in those spots, as well as changing babies’ diapers.

“It’s very disruptive to watch families changing in their cars,” he told the County Commission.

Even worse, he continued, he had numerous complaints from renters and owners about members of the public coming into Sunset Royale to bathe in the “slop sink” and “defecate in the hallways.”

If the county stipulated parking only in the lots at Siesta Public Beach, D’Orsi said, visitors would find the restroom facilities more readily.

Other speakers that day complained about the late-night revelry at the picnic tables. In his petition, D’Orsi wrote that while the typical users of the 12 parking spaces are beachgoers and commuters who use the nearby Sarasota County Area Transit (SCAT) bus stop, “Unfortunately, there are also patrons who utilize the new shelters as a late night hang out and disturb the peace in that area as well.”

D’Orsi added in the petition, “These remaining parking spaces” — which he identified as the only ones for public parking on Beach Road — “continue to present a life/safety hazard to both traffic and pedestrians and continued conflicts arise daily amongst pedestrians, bicyclists, and vehicles.”

He pointed out, “Several physical altercations have ensued from patrons attempting to save parking spots [or because of] vehicles backing into other vehicles while attempting to arrive or depart.”

Sharp pointed out to SNL in a May 10 telephone interview that D’Orsi had attached minutes from the March 2 meeting of the Sunset Royale Association, showing that D’Orsi made a motion, seconded by Frank Canino, to petition the County Commission to remove the parking spaces; it passed unanimously. Sharp explained that under TAC guidelines, every member is counted as having approved the motion, given the narrative of the minutes.

Already, Sharp said, staff has begun public outreach to the organizations that represent both residents and businesses on Siesta Key, to make sure they are aware of the petition and the upcoming meeting.

During the May 3 session of the Siesta Key Village Association (SKVA), Vice President Mark Smith — who was presiding — announced that the TAC would hear the request.

Smith and Siesta Key Association (SKA) President Michael Shay talked of having met with representatives of the complexes.

“Their major complaint is that people party all night long,” Smith said.

“That was the biggest issue about the parking,” Shay added, noting that Sgt. Jason Mruczek — who heads up the Sheriff’s Office substation on the Key — and Lt. Debra Kaspar also had met with some of the residents.

Asking for the elimination of those parking spaces “is a drastic step,” Shay pointed out.

Given the demand for parking in the Village, especially at night, Smith replied, “all parking on Siesta Key is —“

Smith said he felt the SKVA board should provide a response to the petition.

“They have a stake in this,” Sharp told SNL, referring to the Siesta Key organizations such as the SKVA and SKA. “We need them to take a stand.”

Sharp told SNL that county staff welcomes comments from anyone interested in a TAC petition. People may call the County Contact Center at 861-5000, he added, or send emails.