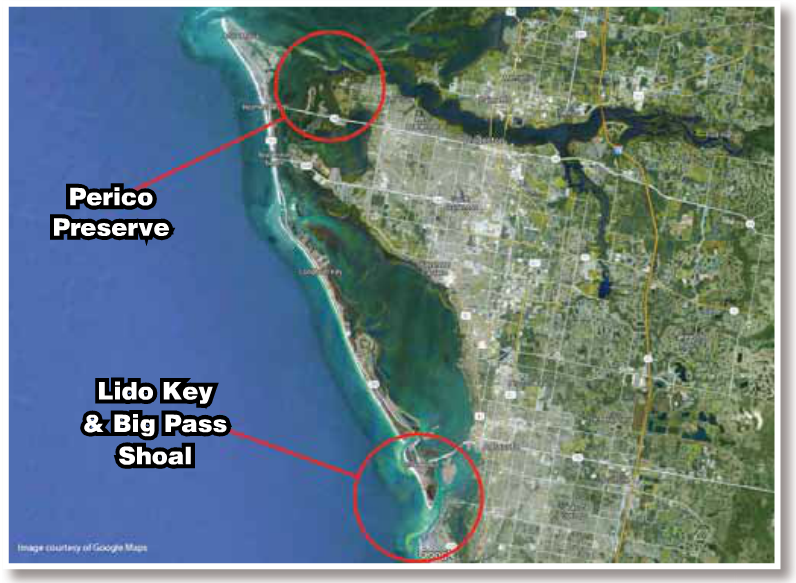 The most recent problem for USACE was the rejection of the Seagrass Mitigation Plan. Two reasons were given: data was not provided by USACE regarding  impact of dredging the seagrass beds along Big Pass ebb shoal . Turbidity evaluation determines how seagrass might recover in the future. Dredging creates cloudy sand ,debris-filled water for an extended period of time, blocking sunlight and interfering with seagrass  reestablishment. The impact continues if marine life dependent on seagrass beds is also destroyed. Turbidity data must be provided for both the dredging site as well as site for seagrass mitigation..

The second reason for rejection was the USACE choice of Pansy Bayou along north Lido.  Florida Fish and Wildlife Conservation (FWC) commented to FDEP; “Pansy Bayou is a year-round manatee “No Entry Zone” for boaters and is an important resting and foraging area for manatees, especially cows and calves. We have consulted with manatee research staff at FWC’s Fish and Wildlife Research Institute and Mote Marine Laboratory who are familiar with Pansy Bayou. Staff with both institutions voiced concerns about how this mitigation project may affect manatee use..” Lucas Davis, Fisheries and Wildlife Biological Scientist III.

Siesta Key Association (SKA), in discussion with FDEP June 23 , learned a new site has been chosen for the ‘off set’ planting or mitigation. While USACE has not yet filed their formal response to FDEP, Staff reported this site to be within  PERICO Preserve. The Preserve is located southeast of the Anna Maria inlet entrance from Tampa Bay and has received significant  public and private funding  for conservation protection and restoration of its wetlands and salt marsh habitat.

While the Biologic Opinion ( part of the Environmental Assessment  or EA) is not yet submitted, Siesta Key Association learned from FDEP Staff,  it may not be a necessary requirement for ‘completeness’ of the FDEP Permit application. This could occur if other documentation is provided indicating the future Biologic Opinion (required for Federal funding) would be acceptable.

Alternative strategies for safeguarding Lido and addressing environmental concerns were communicated  by Siesta Key Association (SKA) to Coastal Resource Staff of Sarasota County on March 24, 2016. This was in response to a suggestion by the County Commissioner Alan Maio for City of Sarasota and Sarasota County staff to develop together  ‘a back up’ plan to assist Lido, if needed, for erosion problems.

The following is excerpted from the SKA email. “Many comments by Col. Mopp(Atkins Global) are relevant for environmental impact of the current project design.  Issues of design modifications could offer solutions to many environmental and economic aspects of the current USACE plan.

1.  “There are the remnants of an existing rock groin north of the two proposed groins and south of the public beach. The USACOE used the sand movement around it to model the future beach contour caused by the proposed groins, especially downstream. Perhaps the USACOE Erosion Mitigation Plan could in part, be solved by removing that existing groin. Col. Mopps (Atkins Global) agrees with this concern.

2.The City must include in the project scope an Adaptive Plan for building a third groin at Ted Sperling Park, if needed.  If the current USACE models are wrong and it is needed, the City .must be ready with designs, permits and funding in hand.  Col. Mopps stated (to Robert Luckner, Ph.D) this is exactly what the USACOE did at Stump Pass under his leadership. The County should insist on this if the first two new groins are installed.

3. Could an alternative project, similar to Longboat Key's be the  “sought after” Plan B mentioned (in BCC) yesterday? This alternative project could be two (2) semi-permeable groins surrounded/supported by trucked sand (now)  and be the needed protection for the critically eroded beach where the two groins are proposed.”.

Siesta Key Association (SKA) suggests that realistic, rational approaches to the project have not yet been offered. For example, a fact based economic comparison of the other possible sources or trucked inland sand ( like Longboat uses) against a full cost of Big Pass dredging. By full cost we mean that the mitigation costs of Big Pass dredging are included. These mitigation costs would include protections and monitoring to control turbidity increases during dredging (as Big Pass is an Outstanding Florida Waterway (OFW) which requires extensive protections), protection of historicl artifacts, protection of natural resources (manatees, sea grass etc) as well as some probability of future remediation to restore the existing south channel once the new middle channel reduces flow in the existing channel.”  Siesta Key Association Environmental Committee Member, Robert Luckner, Ph.D. 3/24/16

These many remaining concerns suggest an Environmental Impact Statement (EIS) is imperative due to complexity and need for updated modeling.  USACE has stated an EA is sufficient . The criteria for requiring the EIS is presently available The distinction for using an EIS is fact based and equally contained in the dynamic unique Outstanding Florida Waterway (OFW) of Sarasota Big Pass.

Siesta Key Association remains committed to a DO NO HARM Solution.

Dredging Up the Past…