Adjacent neighbors refused to support the plan, and a county environmental specialist explained why it did not conform to standards for such projects. That led the Sarasota County Commission to unanimously deny the request of residents on Siesta Key’s Lotus Lane to construct a dock and boatlift on the canal in front of their house. 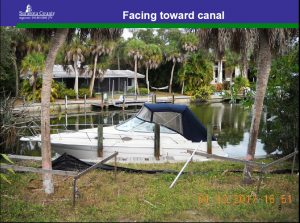 Testifying during the May 24 public hearing, neighbors pointed out that the boat the petitioners own is too big for the petitioners’ segment of shoreline. Moreover, speakers added, if the couple built a dock perpendicular to their parcel, the structure would create navigational problems for other boaters using the canal.

One neighbor on the same canal — Larry Redell of Mangrove Point Road — told the board he has been in his home 24 years. When he and his wife saw the petitioners’ boat on the water, “we were quite bewildered” because of its size, at 27 feet. Then, when they learned of the request for the dock and lift, Redell said, “frankly, we were stunned.”

Robyn Marin — another Mangrove Point Road resident — faced the petitioners in the audience when she said, “You knew the property couldn’t accommodate the dock.”

Given the length of the petitioners’ shoreline and the need for buffers between the property at 601 Lotus Lane and the parcels on either side, the appropriate size of the vessel would be 17 feet, Chance Steed of the county’s Environmental Permitting Division staff explained.

One adjacent neighbor would have to back his boat out of its dock, Steed said, and then take care in turning around, to avoid hitting the petitioners’ pier or boat.

In his rebuttal, Derek Rooney, the attorney for the petitioners — Steven J. Becker and Sherri L. Fowser — told the board he had seen or heard nothing in the testimony or in correspondence from the public that he would “deem competent substantial evidence” in calling for the board to deny the permit request.

Commissioner Alan Maio took exception to that statement in making the motion. Having read the documentation from staff “many times,” Maio said, “I think there’s ample findings by our staff … for this denial. … I wish people would do a better job of due diligence.”

In seconding the motion, Commissioner Michael Moran called the decision “very difficult,” saying he traditionally supports the rights of taxpayers to use their property to the fullest. However, Moran added, “I can just tell you what’s before us today is just much too aggressive for my liking.”

In a June 2 telephone interview, Rooney said, “The Beckers are considering other design options. … Unfortunately, because of the very narrow space [on the canal] … they will pretty much have to get neighbor sign-off for any proposal.”
He added, “We don’t really know what remaining options there are.” 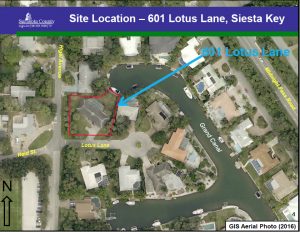 As a May 24 county staff memo explained, Becker and Fowser purchased the property at 601 Lotus Lane in 2011. The parcel “is located on the interior of Siesta Key and has shoreline fronting a canal within the Grand Canal System,” the memo adds.

On Dec. 13, 2016, the memo continues, staff received an application for the construction of the dock and boatlift. However, it notes, the structures would exceed the maximum area allowed for them under the county code: The dock and boatlift would take up about 418 square feet. Yet, the memo says, “The standard siting criteria for a staff-administered Minor Work Permit would limit the subject property to no more than 334 square feet of preempted area …”

Steed showed the board members several slides, so they could see the 27-foot vessel Becker and Fowser have been keeping on the canal. “When it is parked here,” Steed said, “it is too long for the site.”

During his presentation, Rooney pointed out, “There’s no consideration [in the county code] for unusual standards,” such as those existing with the property at 601 Lotus Lane. Additionally, he said, if the dock were built perpendicular to the shoreline, the boat no longer would encroach on the neighbors’ access to the water.

Becker explained to the board that he and Fowser moved permanently to Siesta Key in 2013 “and expect to retire here.”

Over the past year, he continued, they had built a new house on their property, making it only the second one in the neighborhood to conform to modern building codes. “We love to boat,” he said. “We really just want to get the boat out of the corrosive seawater that you know exists.”

Among the other Siesta residents who protested the Beckers’ proposal, Gregory Montwill of Higel Avenue told the board he has no access to the davits on his shoreline because the Beckers’ boat encroaches on his property.

“This is about a community of respect and kindness, so we do work with our neighbors,” he added. “But what [the Beckers are] requesting is beyond respectful.”

If the board allowed the couple to build the perpendicular boat dock, Montwill continued, other boaters who come into that part of the canal would have no way to turn around so they could leave it. Before buying a 27-foot boat, Montwill said, the Beckers should have thought about the fact that they had only 33 feet of shoreline.

Following the public comments, Chair Paul Caragiulo looked at an aerial map of the Beckers’ property and noted the boat was visible. “The amount of space that it consumes is pretty conspicuous.”

Rooney, who told the board he has expertise in riparian rights, said that because the canal is man-made, the property owners do not have the same right of access to it that they would if the waterway were a natural one.