The U.S. Army Corps of Engineers (USACE) has increased the amount of sand it and the City of Sarasota propose to dredge from Big Sarasota Pass to renourish south Lido Key, its consultant informed the Florida Department of Environmental Protection (FDEP) early this week.After citing the figure of 775,000 cubic yards in its first response to FDEP’s Request for Additional Information (RAI) about the project — which FDEP issued in April 2015 — the USACE has resurrected the figure it originally used when it announced the project publicly in September 2013 — about 1.2 million cubic yards of sand.

In its permit application submitted to FDEP in March 2015, however, the project description called for about 950,000 cubic yards of sand.

Additionally, the federal agency has eliminated one of the sand borrow areas from its latest filing with FDEP, and it has confirmed plans to pursue seagrass mitigation by planting Halodule wrightii within Manatee County’s Perico Preserve Seagrass Basin. The latter decision was made after consultation with FDEP, the Florida Fish and Wildlife Conservation Commission, the National Marine Fisheries Service and the U.S. Fish and Wildlife Service, as well as the USACE, according to the Aug. 1 response to FDEP from CB&I Environmental & Infrastructure of Boca Raton, a consulting firm working with the USACE.

The USACE further says that it may need to use the parking lot of Sarasota County’s Ted Sperling Park, on the southernmost part of Lido Key, as a staging area for the work on Lido because of the eroding shoreline in the approximately 1.6-mile stretch of the project. 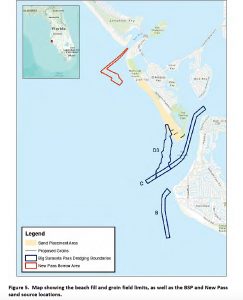 City Manager Tom Barwin and city commissioners recently have discussed the fact that another 25 to 30 feet of the beach has been lost since Tropical Storm Colin swept by the area in early June.

The letter from CB&I went to Gregory W. Garis at FDEP, who is overseeing the application from the City of Sarasota and the USACE for a permit to undertake the $19-million renourishment of Lido Key Beach. The letter was sent in response to the FDEP’s second Request for Additional Information (RAI2) regarding the application. FDEP issued its RAI2 in October 2015.

The letter excludes any mention of sand being removed from Borrow Area D, as earlier construction details showed. Borrow Area D is located to the north of C, according to previously submitted documents. “Borrow areas C and D intentionally overlap at the seaward end of … C,” the earlier project description notes. The letter points out that the USACE still plans on subsequent dredgings every five years, to continue to renourish Lido Key. The amount expected to be removed during each of those undertakings is 325,000 cubic yards, the CB&I letter adds. “The actual quantities are subject to change and will be determined by the physical monitoring data and analyses,” the letter explains.

“[After the latest requested information is received], the department will have up to 30 days to determine if the application is now complete, or if additional information is needed [and] to issue another [Request for Additional Information] RAI. Once an application is deemed complete, the department has up to 90 days to take final agency action — to issue a Notice of Intent to Issue [a permit] or Notice of Intent to Deny. The challenge period of that action is within 14 days of the date of publication of the notice or written notice, whichever occurs first.”

No funding has been allocated for the project through the federal government, which is expected to cover approximately two-thirds of the expense, spokeswomen for the USACE at its Jacksonville District Office have told SNL. Spokeswoman Susan J. Jackson has said, however, that having the FDEP permit in hand would make it more likely for the USACE to obtain the federal money.

Alexandrea DavisShaw, city engineer for the City of Sarasota, has explained that a state grant and Tourist Development Tax revenue allocated to the city for beach renourishment will cover the rest of the expense of the project.

Both the Siesta Key Association (SKA) and Save Our Siesta Sand 2 (SOSS2), which are opposed to the dredging of Big Pass, raised questions about the plan for staging in Ted Sperling Park. Catherine Luckner, second vice president of the SKA, told SNL in an Aug. 2 telephone interview that the organization planned to request that the county decline to lease the area to the USACE and the city for the renourishment project. “They don’t have to let [the city and the USACE] use it,” she said of the county commissioners. 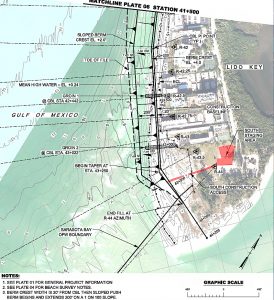 In an Aug. 4 email to county environmental staff, Peter van Roekens, chair of SOSS2, wrote about the plan for the staging area: “This clearly will have an impact on the user experience [at the park].” The Aug. 1 letter from CB&I to Garis at FDEP says, “The south portion of the project area may not be accessible from the north staging area along the beach depending on the condition of the beach remaining at the time of nourishment or groin construction. The south staging area is located in the parking lot of [Sperling Park], which is directly nearby the proposed groin locations.”

The USACE also has proposed constructing two groins on Lido to help hold the sand in place between subsequent renourishments. Van Roekens shared with SNL the response he received the same morning from Matt Osterhoudt, interim director of the county’s Planning and Development Services Department. Osterhoudt replied that the county had not yet received a request from the city or the USACE for such activity in the park. Van Roekens responded to Osterhoudt, “If such a request is made, please let us know as any approval would be tantamount to the County supporting the City and Army Corps plan in the face of the Atkins report.”

(The Atkins report was a peer review of the USACE/City of Sarasota proposal for the Lido Renourishment Project. Commissioned by the county, it raised questions about some of the methodology the USACE and its consultants employed to assert that the dredging would not damage Big Pass or Siesta Key. The USACE and city staff have maintained that the methodology was appropriate. Furthermore, City Engineer DavisShaw has made the statement at multiple public meetings that monitoring of the renourishment project will be undertaken to ensure no negative consequences.)

Responding to a July request from the Siesta Key Association, the Sarasota County Commission on Aug. 23 voted unanimously to ask the U.S. Army Corps of Engineers (USACE) to undertake an Environmental Impact Statement (EIS) to more fully explore the potential for harm to Siesta Key from the proposed dredging of Big Sarasota Pass to renourish South Lido Key Beach.

“The biggest concern to me was there was never a ‘Plan B’ for a smaller taking of sand,” Chair Al Maio said after making the motion. Furthermore, Maio pointed to the fact that facets of the project have changed significantly since the City of Sarasota and the USACE formally announced in 2013 that they wanted to dredge the pass. The amount of sand proposed to be taken from the pass has varied from 1.5 million cubic yards to 775,000 cubic yards to, most recently, 1.2 million cubic yards, Maio said, and the federal agency has switched from an adamant stance that three groins were needed to hold sand in place on Lido Key to planning for two smaller groins.

Maio’s motion also called for the county to notify the Florida Department of Environmental Protection of its concerns that the USACE plans to use property in the county’s Ted Sperling Park on South Lido Key as a staging area for the work on Lido Beach. The Department has been reviewing the USACE/city permit application for the project. “At the end of the day, there is a fear of the unknown,” Vice Chair Paul Caragiulo said, and that justifies an EIS in this case.