With the looming potential that Big Sarasota Pass will be dredged to renourish South Lido Key Beach, a past director of the Siesta Key Association (SKA) has pointed to the history of Siesta Key’s Midnight Pass as a cautionary tale.

In December 1983, two property owners on the southern part of the Siesta Key — Pasco Carter and internationally acclaimed artist Syd Solomon — were alarmed that their homes were precariously close to tumbling into Midnight Pass. Their only hope, they decided, was to relocate the waterway. On Oct. 4, 1983, they won permission from the Sarasota County Commission to do that. Then in December 1983, they brought in bulldozers and closed the channel, according to a timeline provided by the nonprofit Midnight Pass Society. 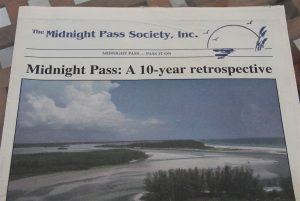 As members of the Society wrote in a publication they issued a decade later, “State officials hastily blessed the plan [with] no environmental impact studies, no baseline data, no water monitoring, no administrative hearing and no engineering review to improve chances the plan would succeed.”

The publication continued, “The senseless act all but destroyed the historic environment, the ecosystem that once was Little Sarasota Bay. … Vast and vibrant seagrass beds once teeming with life have been devastated, breaking the chain of life that existed here for as long as we know. The numbers and diversity of fish have been severely reduced, and all of the clams have been killed.”

Referring to the Midnight Pass situation and the City of Sarasota/U.S. Army Corps of Engineers plan to remove about 1.2 million cubic yards of sand from Big Pass, Bob Waechter said on Jan. 12, “This is what happens if you don’t stop them before they do it.”

Passion about the passes

A former SKA director who served for many years with the organization — and a longtime member of the Midnight Pass Society— Waechter addressed about 80 people during the Jan. 12 SKA meeting.

Before Midnight Pass was closed, Waechter continued, “we had all the assurances as a community from the permitting agencies: ‘This is going to work just fine.’ We didn’t know that there was a knife in their hand when they said that.” He added that the proposed Lido project is proof of Spanish philosopher George Santayana’s famous quote, “Those who cannot remember the past are condemned to repeat it.”

About 10 people attending the Jan. 12 SKA meeting at St. Boniface Episcopal do remember what has happened since December 1983, Waechter added. As a direct result of the closing of Midnight Pass, he continued, the county has had to help pay for two renourishments of South Siesta Key’s beach. (The most recent undertaking was completed in late April 2016, at a cost of approximately $21.5 million. The first — completed in 2007 — cost about $11.2 million.)

During a November 2015 presentation to SKA members, Laird Wreford, the county’s coastal initiatives manager, also talked about how the closing of Midnight Pass had exacerbated the situation on south Siesta. When the pass was open, Wreford pointed out, “sand was still being somewhat held in” on the southern portion of the Key. “You didn’t have that same rate of erosion on Turtle Beach and south Siesta [as seen today].”

During the Jan. 12 SKA meeting, Waechter told the audience that, among other impacts of the closing of the pass, the benthic creatures in Little Sarasota Bay died off, “to be replaced by another environmental community but a much inferior environmental community.” (“Benthic” refers to the lowest level of a body of water. Organisms living in that zone — including crustaceans — are an important part of the food chain, scientific research has shown.)

In 1994, Waechter explained, “the county came around to our way of thinking,” in large part because of the efforts of Nora Patterson, who served on the County Commission for four terms before having to step down in 2014 as a result of term limits. Prior to that, she was a Sarasota city commissioner for eight years. Patterson also lives on Siesta Key.

Sarasota County spent $1 million in a fight for the state permits to reopen Midnight Pass, Waechter told the audience. State environmental officials required the county to undertake “all the studies and the engineering reports that they didn’t do [before the pass was closed].” The state agency that was the predecessor of the Florida Department of Environmental Protection (FDEP) even insisted that the county undertake an Environmental Impact Statement (EIS), Waechter said. “Unfortunately, we were fought to a standstill.”

The state ultimately refused to grant the county permission to reopen the pass, he added.

If the U.S. Army Corps of Engineers (USACE) and the city are allowed to dredge Big Pass once, he pointed out, “you will never get them to retreat.” 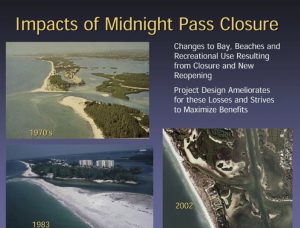 Former Commissioner Patterson told the SKA members that when the USACE announced that Big Pass would be its primary sand source for the Lido project, the County Commission asked why it did not seek other sources before it dredged “a pass that had never been dredged. Their answer was that the nearest sand source was 45 miles away.”
Patterson added that at the same time, the county was working on plans for the second South Siesta Key Renourishment Project. Two sand sources for that undertaking had been located in the Gulf of Mexico, she pointed out, though she acknowledged that the sand was “a little grayer … than what you could possibly get from Big Pass.”

The USACE’s response, Patterson continued, “sort of inbred, especially for those of us who have been here a very long time on Siesta Key and in Sarasota … a certain distrust of really quick answers from the Army Corps.” She added, “It’s hard to trust folks once they’ve fooled you.”

News up and down the Trail

What’s behind the hospitality staffing crisis?