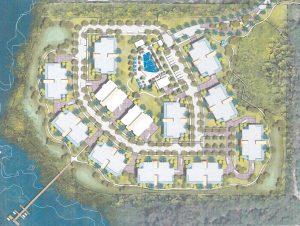 Ruth Brandwein and a number of her Pelican Cove neighbors are especially protective of the last undeveloped, private piece of property on Little Sarasota Bay. It stands next to Sarasota County’s Bayonne Preserve, where bald eagles nest and gopher tortoises burrow into their homes. With Oscar Scherer State Park and Historic Spanish Point both nearby, “there is a whole flyway of native lands,” she points out.
The preserve also is the site of Indian mounds, Brandwein says. That means that vacant land next to it also could hold archaeological treasures, though an expert who works with Sarasota County on such matters has explained that artifacts could be buried so deeply it would take extensive excavation to find them.
Still, those are just a few of the reasons, she told SNL recently, that she and her neighbors will be watching on Nov. 3 as the Sarasota County Planning Commission reviews plans for the Cassia Cay residential and mixed-use project proposed for that property next to the Preserve.
Brandwein was hoping the hearing would not be scheduled until after the November election, when many of the Pelican Cove residents who leave for the summer would have returned for season.
She and other former members of the Pelican Cove Government and Neighborhood Liaison Committee researched the Cassia Cay plans, as the development’s border would be only half a mile from Pelican Cove, she said, which is reached by Vamo Road. And while the Pelican Cove board ultimately wrote a letter to county representatives to express concerns about traffic the project would generate, the organization took no position on the development itself.
Therefore, Brandwein pointed out, she and her like-minded neighbors are acting as individuals, not official representatives, in voicing their concerns about Cassia Cay.
The two parcels that comprise the project were rezoned in 2006, she explained. The plan then was for a mixed-use commercial development on the property adjacent to U.S. 41 and high-density residences on the bay. Now the proposal has morphed into one with more retail space and fewer dwelling units. Moreover, she added, the residences are planned for taller buildings.
Kevin Daves of Core Development Inc. of Wichita, Kansas, is the developer. Sarasotans may remember him from his work with the Ritz-Carlton project in downtown Sarasota and The Concession golf club community.
During a December 2015 neighborhood meeting required by Sarasota County, Daves explained that to make the project successful, he needed to reduce the amount of office space and increase the retail mix, according to notes from that session attached to the county application.

Project details
Filed with county staff in February, the application says the Cassia Cay mixed-use development would stand on about 18.5 acres on the southwest corner of U.S. 41 and Holiday Drive, at 7914 S. Tamiami Trail. The proposal calls for 16 buildings, 14 of which would be for retail/commercial uses — including restaurants — the application says. Building 12 would have retail uses on the ground level and 58 multi-family units spread among that floor and the second and third levels, the application notes. Building 15 would have retail uses on the first floor and offices on the second through fourth floors.
Daves — working through his Sarasota agent, attorney Brenda Patten — is seeking the rezoning of the property as well as a special exception to increase the maximum height of three buildings that would stand on the southern portion of the property. The current zoning limits the height to 35 feet, according to the February application. The proposal is for those three structures to stand at 49, 47 and 38 feet, to accommodate the first-floor retail uses and to have three stories for the residential units and parking.
The plan seeks approval for up to 170,000 square feet of commercial space, up to 40,000 square feet of office space and 120 dwelling units altogether. On the site, 63.7 percent of the acreage would be open space, the application points out.
Initial construction is planned to start in the first quarter of 2017 and end a year later. The final units would be completed in 2020, the application says.
The curren 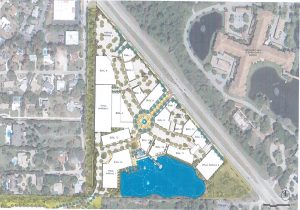 t zoning and stipulations allow for 100,000 square feet of office space, 110,000 square feet of retail space and 152 dwelling units, according to a presentation the development team provided during the December 2015 neighborhood meeting.
The approximately 13.33-acre parcel set aside strictly for multi-family housing is on Little Sarasota Bay, south of Holiday Drive. The proposal for that land calls for 98 dwelling units over ground-level parking in buildings that would range from three to five stories, according to the December 2015 neighborhood meeting details. That would put the structures at 45, 56 and 68 feet, the February application says. A special exception would be sought to increase the height allowed through current zoning.
The plan also calls for an “amenity center,” or clubhouse.
The site is zoned to allow 152 dwelling units in three- and four-story structures with residences above ground-floor parking, the December 2015 workshop information shows.
The revised concept plan, the application notes, “reduces massing of the residential buildings and shifts the development further away from the Holiday Harbor residential area along Questar Lane.”

Traffic concerns
Traffic congestion has been the primary concern of many Pelican Cove residents.
A number of the proposed changes accompanying the rezoning application involve traffic measures dating to the 2006 plans for the property. The Cassia Cay development team wants to eliminate an agreement to extend the existing southbound to eastbound left turn lane on U.S. 41 at Lake Point Boulevard/Springfield Drive; eliminate the stipulation for construction of a southbound to westbound right-turn lane to the north access on U.S. 41; and eliminate the stipulation for construction of a northbound to westbound left-turn lane at the proposed intersection of the development’s northern driveway and U.S. 41. The proposal also calls for a third access point into the mixed-use area from U.S. 41.

An environmental report completed in January, which was included with the February application, says visits to Bayonne Preserve confirmed that bald eagles were incubating eggs in the nest Brandwein mentioned to the SNL. However, because bald eagles no longer are listed as threatened species, the federal and state governments have reduced the distance between them and development to 330 feet from 660 feet, the report says.
Moreover, Cardno — the firm that prepared the report — applied for and obtained a bald eagle “take permit” in March 2010, in connection with plans for the previous development, Grande Bay. That permit has not expired, the report adds, so Core Development will consult with the U.S. Fish and Wildlife Service (FWS) and the Florida Fish and Wildlife Conservation Commission (FWC), as required, to ensure the firm complies with “current state and federal management guidelines for bald eagles,” the report notes.
The environmental report also says that prior to development of Cassia Cay, all gopher tortoises “occupying the site will be relocated … pursuant to a permit issued by FWC.”