When it comes to a paid parking approach for Siesta Key Public Beach, the director of Sarasota County’s Parks, Recreation and Natural Resources Department summed it up on Oct. 11: “It’s complex.”

In response to County Commission direction in July, Carolyn Brown reported to the board on the research staff members had pursued, offering a wide variety of options.

It took about 50 minutes before the commissioners agreed to have staff come back to them soon with more details on a plan that would create a total of 56 public spaces on property the Sarasota County Sheriff’s Office will be vacating at the end of the year at 6647 Midnight Pass Road. The land is owned by the county’s Public Utilities Department.

Spencer Anderson, interim director of the Public Works Department, had provided the board an estimate of $507,000 for a shell lot on the site or $530,000 for an asphalt lot, adding 39 spaces to the 14 already available.

Both Commissioners Alan Maio and Charles Hines indicated their surprise at the figures. Maio asked that Anderson and his staff undertake further work on the proposal, acknowledging that utility lines underground are a factor to be considered in any design.

Staff should be able to get back to the board quickly on that plan, Administrator Tom Harmer responded.

Additionally, at commissioners’ request, Harmer said staff will contact other nearby counties that have paid parking programs at their beaches to ask for information about the consultants they used and the expense of hiring that outside help.

Brown made it clear to the board that no one in her department or Public Works has the expertise to handle the design of a paid parking program for Siesta Public Beach.

“Parking management is a very highly specialized industry,” she pointed out.

Maio suggested staff come back to the board more frequently on ways to tackle “smaller bites” of the array of options Brown laid out. “We could likely change your direction,” he told her, after initially indicating that Brown could make her next presentation in six months.

“Definitely before the next budget cycle,” Chair Paul Caragiulo said of Brown’s timeline. Typically, the board begins its budget workshops in February. If a paid parking program at the beach is introduced ineffectively, Caragiulo pointed out, “you’ve now poisoned the well for an awful long period of time.” If the board does choose to put a payment system in place, he added, “it should be some sort of tiered system.”

Furthermore, Caragiulo noted, “People need to know exactly where the money’s going, because that affects their behavior very much.”

A survey of the Siesta Key Association’s members in August and early September — which netted 693 responses — found that 59.52% of respondents believe all the proceeds from paid parking at the beach should be invested in transportation and parking projects for Siesta Key, Brown noted. The Siesta Key Chamber of Commerce board voted in August, Brown added, to voice the view that all proceeds be used on the island, as well.

Hines suggested that owners of property near the beach think about ideas they could offer the commission. For example, he said, Benderson Development Co. has been working on the proposed Siesta Promenade project at the northwest corner of the U.S. 41/Stickney Point Road intersection. That concept includes a hotel. Benderson could build an extra couple of levels in a parking garage for that facility, Hines said, and charge people to park there and then take a trolley to the beach.

Brown noted in her report that the free Siesta Key Breeze open-air trolley operates seven days a week, from 10 a.m. to 10 p.m., between Turtle Beach and Siesta Village. The free service is funded through the 2018 fiscal year, with an annual cost of $863,700.

Although grants are covering much of the cost, commissioners acknowledged that revenue from a paid parking system at the beach could pay to continue the Breeze’s operations after this fiscal year and to add legs to the route.

For another example, Hines said, the county has a Sarasota County Area Transit (SCAT) transfer station in the Gulf Gate shopping center near the Stickney Point Road/U.S. 41 intersection. Perhaps the county could build a parking garage on the mall site, he added, so people could leave their vehicles there and then use a mass transit option to reach the beach.

Although Brown and her staff had researched park-and-ride sites at schools such as Phillippi Shores Elementary — with the Sarasota County School Board having expressed interest in that potential — Hines pointed out that people want easy access to the beach. Those schools, he said, are just too far from Siesta Key.

“My stumbling block is what is the point of paid parking?” Commissioner Nancy Detert told Brown. Is the purpose to create revenue for a new parking lot, she asked. Is it to try to encourage people to leave the beach sooner, opening up spaces for other visitors? Is it to enable property owners to incur less expense — through the allocation of permits at lower or no cost — so they can access the beach more easily?
“I think you’ve hit the nail on the head [with all of those potential results],” Brown responded.

The money could be reinvested in maintenance of the beach park and in management of the parking area to create a more orderly process, for examples, Brown said.

“The purpose of paid parking is to provide an opportunity for the parking [at the beach],” Caragiulo said.

Yet, both Detert and Commissioner Moran voiced opposition to making the public pay for parking at any of the county’s beaches.

“[Free beach parking] is one of the few amenities that is so special to Sarasota County,” Moran said. From the wealthiest people to fixed-income senior citizens to growing families — all can go to the beach for free, he stressed.

In an Aug. 16 conversation, Brown continued, Leatherman said he considers parking fees in relation to beach access, “including how reasonable the charge [is] and how the revenues are used” — for example, if the money goes toward operations at the beach or related activities, as well as reinvestment in the beach.

He added that the free Siesta Key Breeze trolley is “a clear benefit to beach visitors,” Brown noted. 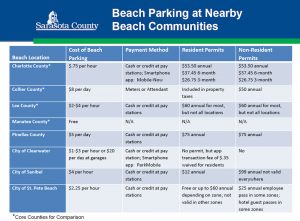 Village gets recycling containers at last