The 7,429-square-foot property at 162 Beach Road has become famous—at least among 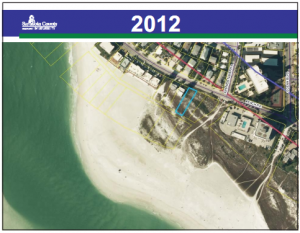 That’s because two separate owners of the parcel have tried on four different occasions to build a residential structure in recent years, and were subsequently turned down by the County Commission each time. The property, and an adjacent parcel, are located water-ward of the Coastal Setback Line, and have historically flooded during past decades—intermittently changing from gulf-front land into part of the Gulf of Mexico.

Now 162 Beach Road is at a center of a special-magistrate-mediated effort between the county and the current property owners, Ronald and Sania Allen, who have appealed the last rejection of their request for a Coastal Setback Variance. Residents in the Village say the outcome of the mediation could impact their properties—and could have a wider effect across Siesta.

“It’s a big issue for the Key,” said Peter van Roekens, who lives in the Terrace East condominiums next to 162 Beach Road.

The Siesta resident worries that allowing the couple to build a structure on their property would threaten a fragile dune environment, impact beach erosion nearby, harm nearby real estate values and impede the beach views for van Roekens and his neighbors.

The coastal setback rules — last modified in 2004 — prevent construction on the dune habitat, and help prevent beach erosion and mitigate the effects of floods from significant storm events, such as Tropical Storm Debby in June 2012, which led to significant flooding of Beach Road. In addition to 162 Beach Road, 22 other properties throughout Siesta Key are located past the Coastal Setback Line.

Like van Roekens, Catherine Luckner, second Vice President of the Siesta Key Association, also has concerns that a decision to allow construction would be a risk to nearby properties and the sensitive coastal environment.

Luckner notes that wildlife use the dune area, including three rare species of birds nesting near the property at 162 Beach Road: the snowy plover, least tern and black skimmer. “It was kind of like a nesting condo,” Luckner said. Allowing a structure beyond the Coastal Setback jeopardizes both this dune ecosystem that is home to wildlife and the shoreline environment that protects the Village.

In addition, Luckner worries about the precedent that could impact Siesta Key across the island at the 22 other properties located beyond the Coastal Setback Line.

“I think it would be a very risky thing to open tracts of land that are vulnerable to flooding and storm surge,” Luckner told Siesta Sand.

A favorable decision by county officials allowing the Allens to build would thus have an impact beyond Beach Road, Luckner said. “If you don’t abide by your own policies, then you have set the precedent for the floodgates to open.”

Some of the properties are partially submerged or prone to flood are referred to “water plats” because the platted lots are often under water.

In January, 2013, owners Ronald and Sonia Allen’s plans to build a three-story home were turned down by county commissioners. Then the Allens submitted revised plans for a smaller, two-story house July 10, along with a new application for a Coastal Setback Variance. In April, 2014, the Sarasota County Commissioners again unanimously denied their request for a the setback variance allowing them to build on the lot.

Following the April County Commission vote, the Allens filed a request for relief with the county. As of press time in late January, the county attorney’s office and the property owners’ lawyer are currently wrapping up mediation. The request for relief was filed under a state provision called the Florida Land Use Environmental Dispute Regulation Act. (FLUEDRA). A special magistrate has been acting as mediator between the owners and the county attorney’s office.

If an agreement is reached by the county and the property owners, the County Commission would have to OK any deal.

If an agreement isn’t reached, however, the special magistrate can make a ruling. According to the FLUEDRA statue, “If an acceptable solution is not reached by the parties after the special magistrate’s attempt at mediation, the special magistrate shall consider the facts and circumstances set forth in the request for relief and any responses and any other information produced at the hearing in order to determine whether the action by the governmental entity or entities is unreasonable or unfairly burdens the real property.”

According to the Sarasota County Property Records, Ronald and Sania Allen, of Osprey, purchased the property at 162 Beach Road in May 2009 from Brent Cooper, Trustee.

Ronald Allen says he has recently modified the homes plans to lessen the house’s square footage.

“We’re working with the county attorney and all the other people involved,” Allen told Siesta Sand. “It’s a long process and very expensive for me. But I can’t just turn my back on it.”

Allen expects to hear an outcome in the mediation soon.

“My attorney said within the next 30 to 60 days we should get some results,” Allen told Siesta Sand in an interview in mid January.

Allen says he “can’t give up” after investing millions in the property and litigation.

“I own several properties on Siesta Key, and I was told when I bought it, from the realtor at the time, it was zoned proper and I would be able to build a certain type of home.” Allen said he figured he would probably have to go through hoops to get a new home approved on the Key, but he “didn’t think it would get completely denied.”

Van Roekens, who has voiced his concerns publically at commission meetings, believes if a residential structure is approved at 162 Beach Road, that’s not the only structure that could be built. He predicts the owners will request to build a seawall in the near future in order to protect a home that’s built so close to the water.

“Once they have one, the next [owner] will ask for one and it will cascade,” van Roekens said.

If a structure is built at 162 Beach Road it would likely negatively impact property values, van Roekens argues, and place a home on property that has historically flooded.

“It flooded in the 90s, and has flooded before then as well,” van Roekens said.

According to van Roekens, the parcel next to 162 Beach Road, which was formerly owned by the Allens, has recently been sold. 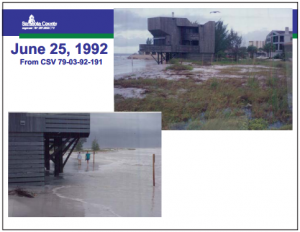 images showing how the property has flooded or been surrounded by water in recent history, including after storms in 1980 and 1992.

Van Roekens also questioned Ronald Allen’s statement to Siesta Sand that Allen was told he could build a home on the property. “The fact that someone would buy this property knowing the previous owners had been rejected before for a variance… that doesn’t make sense to me.” 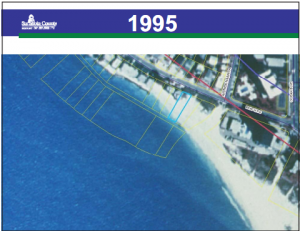 Luckner notes that the county has been firm on upholding regulations on the waterfront. For instance, a few months ago a waterfront property owner’s plans to triple the square footage on a lot in the Sanderling Club community was denied.

Luckner is confident the county will not allow a residential structure on the property and therefore continue to protect the sensitive environment and shoreline.  She believes the two new county commissioners will “do their homework” and wouldn’t make a decision that puts part of the Key at risk.

One possible outcome is for the county to purchase 162 Beach Road to preserve the beachfront property, Luckner said.

What’s New on Siesta Key: The eyes have it at Eye Style Optical Boutique