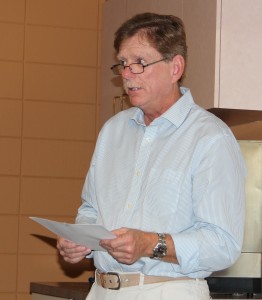 For more than a year, Siesta Key Village Association (SKVA) Vice President Mark Smith and a committee comprising members of that group and other island organizations have been working to carve out about 300 additional Village parking spaces — a highly prized commodity for residents and visitors alike.

After a meeting with county staff in early January, Smith told about 12 SKVA members at their monthly session in January, he hopes to be able to report on progress this month. As with any proposal of this sort, he said, “there’s a cost involved. ”Smith added, “I had a bit of a brainstorming session with Commissioner [Al] Maio,” with the result that the committee will seek money through various programs. (The Key is in District 4, which Maio represents on the County Commission.)

“We’re going to have to be creative with the funding,” Smith said during an interview after the meeting. He predicted to the SKVA members that it would take at least two years to implement the plan he has proposed, if his committee can finance it.

At one point, Smith continued, county staff members suggested he raise the idea of creating another parking agreement to supersede the one the County Commission approved in March 2009 after months of discussions among island organizations. “I told them that if I were to bring it up to the group, there would be laughter, and then I would be stoned …”Smith said he believes mismanagement of that 2009 plan has led to current problems.

A memo provided to the County Commission in advance of its March 18, 2009 vote pointed out that an ad hoc committee, chaired by Smith, “was formed to review and discuss the proposed revisions to the parking standards for restaurants and bars within the Village,” following the release of a draft 2008 county parking study.

With about 21 members representing the SKVA, the Siesta Key Association and the Siesta Key Chamber of Commerce, the committee “met numerous times between August 2008 and October 2008, including a recent meeting in January 2009,” the memo added. 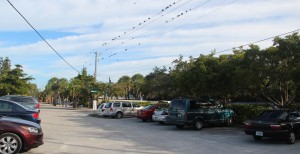 The draft study reported that existing on-site parking for all parcels within the Village was 820 spaces. The total supply, including adjacent right of way parking (parallel and non-parallel) and spaces within the Municipal Lot, was 999, it added.
County spokesman Jason Bartolone confirmed in early January that county staff has noted no change in the numbers since the study was completed.

One of the most contentious elements of the 2009 ordinance the County Commission approved was the apportionment of parking spaces for bars and restaurants. Both types of establishments are required to have one spot per 50 square feet of indoor and outdoor “patron floor area,” under the provisions of the Siesta Key Overlay District (SKOD) within the County Code. However, existing bars and restaurants were grandfathered in when the new rules were imposed.
The ordinance did say that additional spaces had to be provided “to address any change in use or any expansion that results in an increase in the required parking ….”

The new proposal
During the interview, Smith explained that he drew up the new Village area parking plan almost exactly a year ago. It incorporated ideas such as allowing drivers to legally leave vehicles in rights of way, including the space across from the Old Salty Dog restaurant on Ocean Boulevard — which would be sufficient for 20 spots — and an asphalt area along Avenida Messina that could be grassed over to create another 20 spaces. 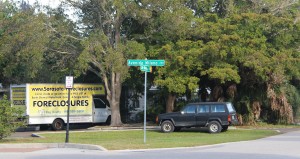 Further, Smith said, the plan calls for the formal allocation of parking spaces in other rights of way close to the Village, including the open grassy area adjacent to the office of his firm, Smith Architects, on Calle Minorga. The grass could be replaced with shell in places to make it more obvious to drivers that the sites are intended for parking, he pointed out. Altogether, Smith noted, about 90 spots could be carved out of rights of way.
Yet another element of the plan proposes the county lease the lot off Avenida Madera, adjacent to the Municipal Parking Lot. However, he noted, “That has not gone very far. … The property owners are just not interested.”
Another potential parking area is the shelled lot next to The UPS Store on Beach Road, Smith said, which would allow for about 80 spaces, if the County Commission were to grant a special exception for parking there. The owner of that parcel would have to agree to the change, he added.
A search of county property records showed the lot adjacent to The UPS Store — 221 Beach Road — comprises 11,728 square feet. It is owned by a trust whose trustees are listed as residing in New York City. The plan also proposes creating spaces out of the areas used for valet parking, Smith noted.

Some negotiations related to parking are going on between private landowners, he continued. If they reach an agreement to improve the situation, Smith pointed out, “it may be a model for other property owners.” Of the approximately 300 spaces he believes his plan could add to the Village, Smith continued, only about half are not affected by private property claims.

In the meantime …
During the January SKVA discussion, Michael Shay, president of the Siesta Key Association (SKA), pointed out, “We’ve talked in the past about using the [Siesta Public] Beach parking lot late in the day” — until its midnight closing — for Village patrons. However, he explained, the county’s Parks, Recreation and Natural Resources staff had not wanted to discuss details of such a proposal until after the beach park renovations have been completed, which is scheduled for this month. Therefore, Shay continued, he was set to meet with Carolyn Brown, director of Parks, Recreation and Natural Resources, and members of her staff on Jan. 26.

“Commissioner Maio is fully in favor of [the parking proposal],” Shay added, “and it doesn’t cost anything.” It involves the lot on the north end of the beach park, he noted.  After the renovations are completed, the number of spaces at the beach will increase from 837 to 980.
If Brown agrees to the proposal, Shay continued, the SKVA could post the information on its website, so people planning to visit the Village would be more likely to consider using the beach lot. Then they could walk or catch one of the free-ride services into the Village.

Greetings from the Gulf: Let’s not fight, let’s just vote