From bridges to beaches, county improvements planned for Key

By Roger Drouin
As Sarasota county commissioners hone in on the county’s fiscal year 2016 budget, funding for several Siesta Key projects is beginning to take shape.

At three separate meetings over the past two months, county commissioners discussed funding for infrastructure improvements on the Key—from a new Siesta wastewater lift station to repairs at eight smaller, hump bridges across the island.

On Feb. 18, commissioners voted to approve a contract with Uretek Holdings for $759,090 to repair the eight bridges on the Key. On March 17, the board approved $829,075 in funding for the engineering phase of the new Siesta Key lift station and a section of wastewater pipe.

Then, at a workshop March 20, the County Commission reviewed infrastructure funding in the countywide five-year Capital Improvements Program (CIP), which includes funding for several Siesta projects in 2016. The CIP program includes the ongoing Siesta Public Beach improvements and a South Siesta Beach Renourishment project. Funding for both are slated for final approval in August when county commissioners approve the fiscal year 2016 budget.

The mix of projects is good news for the Key, says Michael Shay, president of the Siesta Key Association.

“Any infrastructure improvements to be done out here, especially when it comes to the shoreline and the beaches, is always good news,” Shay told Siesta Sand.

But even the repairs to the smaller, hump bridges on the island are needed, Shay said.

Most mornings, Shay walks his dogs across one of those bridges, on Givens Street. “I have seen cracks in the pavement that run from one side of the bridge to the other,” Shay said. “In the back of your mind you wonder, ‘Gee, I hope this is OK.’ And to see it included in the list (of improvements), it’s good to see they are checking things closely and putting money where it’s needed.”

Shay notes that improvements will benefit both permanent residents and the many beach goers who come to Siesta. “We need to keep up with our infrastructure here,” Shay said.

Here is a breakdown of some of the projects discussed: 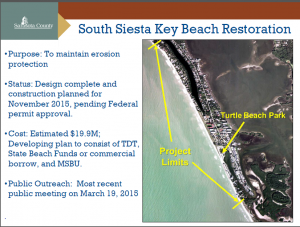 The $19.9-million beach renourishment on South Siesta — which includes Turtle Beach Park — is included in the county’s five-year Capital Improvements Program. According to Sarasota County, funding for the $19.9-million project will come from Tourist Development Tax dollars, state beach funds or commercial financing, along with MSBU (property assessed annual fees paid by property owners near the renourishment).

However, the start date for the project has been delayed, due to what county officials at the March 20 workshop called a “curve ball.”

The original start date for the project, to replenish the sand that has eroded from the shore since the last renourishment in 2007, was planned for January so it could be completed before the start of sea turtle nesting season in May.

The U.S. Fish & Wildlife Service, however, declared the Rufa Red Knot bird as a threatened species that is now protected by the Endangered Species Act in 2014. Due to this change, the start date for the project has been moved to November, when the project is not expected to impact the now-protected birds.

“The goal is to have the project started in November,” Sarasota County Spokesman Jason Bartolone. 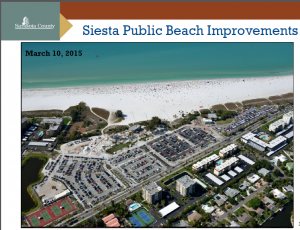 Siesta Public Beach Improvements
On March 10, all of the public parking was open along with the new playground at the improved Siesta Public Beach area. A total of 143 new parking spaces were added just in time for spring break. The county and its contractor stayed within the project’s budget thus far, and managed to add additional construction work within that budget, such as adding in pavers and increasing the size of some of the landscape trees used, Brad Gaubatz, Sarasota County Public Works Project Manager, told commissioners March 20.

All four phases of the construction work at the Siesta Public Beach are expected to be completed by early 2016, with construction at the West concessions taking place next.

Commissioner Alan Maio, who as District 4 Commissioner represents the Key, said he hasn’t heard complaints about the construction work and gave kudos to the contractor, Jon F. Swift Inc. So far, the improvements look great, he said. “Our whole community needs to be very proud,” Maio said.

Siesta Key Lift Station and Force Main Pipe
This project is a multi-year, multi-million dollar project with the overall goal of removing the Siesta Key Wastewater Treatment Plant and replacing the aging facility with a new lift station and force main sewer pipe.

It will take four phases of construction work to decommission the aging plant, which is is a remnant of a previous type of wastewater treatment. It is the only wastewater facility currently in the county that treats water and discharges it into a waterway. The county plans to decommission the old wastewater plant by December, 31, 2016. That plan has to come to fruition in order to meet an agreement with the Florida Department of Environmental Protection (FDEP), which is mandating shutting the facility down.

The County Commission’s approval March 17 of funding for engineering work is a step forward for the long-planned project.

Once constructed, the new pump station and force main will transfer about 1.5-million gallons per day of wastewater from Siesta Key to regional water reclamation facilities on the mainland. The wastewater will mainly be treated at the Bee Ridge Water Reclamation Facility, which will also undergo upgrades as part of the five-year Capital Improvements Program. Construction of the $2.5 million project to expand wastewater treatment capacity at the Bee Ridge facility should start August, 2015.

There is a question of what to do with the remaining land at the end of Shadow Lawn once the new lift station is built. The property fronts Grand Canal, and the new lift station will take a significantly smaller footprint than the treatment plant. The 10-acre Glebe Park is also close by.

The Siesta Key Association is getting ready for the wastewater facility’s decommissioning next year. The organization has formed a committee to review possible options for the property after the demolition of the current facilities. The committee wants to make a recommendation to the county on what to do with the parcel.

“We want to come up with some viable ideas for what to do with the property,” Shay told Siesta Sand. 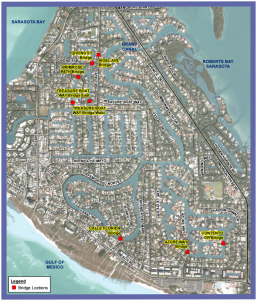 The project design is complete, and repair work is slated to begin Spring 2015, with a Summer 2015 expected completion.

According to the Sarasota County project description, the construction work consists mostly of filling existing voids under bridge approach slabs and sidewalks.

Saba Sands to take another shot at creation of condo complex