Palms May be Tops with Tourists, but not all Locals Agree

With all due respect to Mr. Kilmer, some Siesta Key residents might add this caveat to that sentiment: It depends on the tree.
Despite generally positive reviews from those attending opening ceremonies earlier this year for the recently completed Siesta Beach improvement project, at least some Key residents have questioned the county’s landscaping choices for the park’s makeover.

Of the project’s $21 million budget, $850,000 was spent on trees, shrubs and other landscaping improvements, according to Brad Gaubatz, the county’s point man for the project.

“There are 40 royal palms at the main entrance, 12 live oaks in phase one near the maintenance building, 94 green buttonwoods near the playground for shade, 62 sea grapes and 1041 sabal palms in the parking lot,” Gaubatz explained in a phone interview recently.

All told, more than 1600 native trees were included in the park’s landscaping plan, as designed by the consulting firm Kimley-Horn and Associates.

But some residents have questioned why so many trees were planted in the parking lot and along the new esplanade, blocking views of the project’s focal point: the beach beyond. The issue was raised at a Siesta Key Association meeting in February.

In a follow-up e-mail to the SKA after that meeting, later forwarded to the county, Jane McIntire, president of the Beachway Condo Association board of directors, pointed out that prior to the renovation “the only place on Siesta Key where you could drive down the road and see the number one beach was at the main beach parking lot. Thanks to all the improvements, you really can’t see the beach anymore.”

But as it turns out, preserving the view of the beach from across the parking area was never an option due to rules that now govern parking lot design and construction.

Back in the 1950s when the beach was first developed ordinances and zoning requirements did not mandate the planting of trees to soften the view and provide shade across large expanses of asphalt. Such requirements are in place today explained Gaubatz.

It’s similar to the situation now faced a mile or so to the south at the Excelsior Condominiums where repairs planned for the buildings damaged by the tornado that swept through the complex in January must meet today’s stricter building codes, not those in place when the buildings were originally constructed back in 1980.

Another issue being raised concerns the choice of so many cabbage palms, also known as sabal palms, for the parking lot. They happen to be the state tree of Florida, but some consider them ‘dirty’ trees, requiring considerable 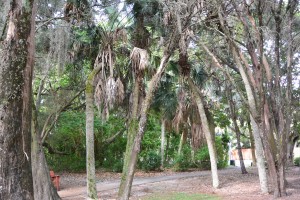 maintenance to look their best. One of the raps against Australian Pines has long been their own status as ‘dirty,’ a reputation earned for the prodigious amount of needles and cones they shed which accumulate beneath their canopies. (Some of the exotic pines were removed from the park for just that very reason as part of the improvement project, though some remain due to public input received in the project’s early planning stages). Some point to the cabbage palms as being equally messy, dropping their dead fronds and seed pods several times each year.

But Kimley-Horn project Manager Bill Waddill explained in a recent phone interview that given the choices available, and the tradeoff  between shade and visibility, the cabbage palms were the best alternative.

“There is no perfect tree that works in every case,” he said. “The cabbage palm is native to Florida. It is hardy and well-suited to the winds and salt spray of a coastal environment.”

But the final decision was in large measure sealed by Sheriff  Department concerns about the same issue of clear sight lines raised by McIntire at that February SKA meeting mentioned earlier.

“The Sheriff Department wanted to be able to monitor as much of the parking lot as possible from their new command center and other spots near the beach,” said Waddill. “Oaks or other trees with large canopies would have blocked much more of that view than the palms.”

In fact, in order to address Sheriff Department concerns, a variance to the original code had to be adopted by the county to allow for less shade in the lot than would have otherwise been required.

The sabal palms adhere to the county’s ‘best practices’ policy for using native species whenever possible, both for the hardiness Waddill points to and their low maintenance requirements. Indeed, sabal palms are often described as ‘self-pruning’ since their dead growth eventually falls to the ground on its own.

But their ‘dirty-petticoat’ of yellow and brown fronds can remain hanging in the trees for months before gravity finally prevails. That’s why most private resorts, homeowners and even towns like Fort Myers Beach and Naples routinely cut the dead growth off their palms several times a year, often at considerable expense.
So will the county take that approach here or choose to let them go ‘au-naturale?’

Siesta Sand got a mixed response on that score.

Gaubatz pointed to their self-pruning quality, adding that over-pruning can actually be bad for palms. “It can make the trunks narrow at the top and eventually hurt the tree,” he said.

But Siesta Beach is a showcase. After all, that’s why the improvement project was proposed in the first place shortly after Dr. Stephen Leatherman (a.k.a. Dr. Beach) named Siesta the nation’s best beach in 2011.

Asked about the aesthetics of up to a thousand ‘dirty-palm-frond petticoats’ swaying in the wind to greet visitors, Gaubatz referred us to Beach Parks Manager George Tatge.

He agreed with Gaubatz’s comments about too much pruning, saying, “the healthiest cabbage palm is one not pruned. They lose micro-nutrients if you over cut them.”

But he added that the county will have to work out its ongoing maintenance approach over time. “They’re all new and look great now. But the palms in public areas will likely get a higher level of maintenance than those less visible ones tucked away by the dunes.”

Another possible concern: disease. By planting so many examples of one tree, an infestation of cabbage palm disease could be devastating to the county’s investment. Many formerly grand canopied avenues and boulevards in northern cities were left exposed and barren after Dutch Elm Disease wiped out virtually every example of that species starting in the late 1960s. Many municipalities came to regret the decision of earlier city park administration to use Elms almost exclusively along so many public thoroughfares.

While not dismissing the possibility of a disease outbreak Waddill said that cabbage palms have done ‘very well’ on Siesta Key. “Am I concerned about a limited palette? Yes. But there’s an issue with almost any tree. Nothing’s perfect. They’re living things.”

In any case, the tropical look of all those palms at Siesta Beach is certainly in keeping with the expectations most visitors have for an exotic, tropical playground. According to Gaubatz, they help define the parking lanes and work to focus attention toward the beach even as they work to obscure it for residents across Beach Road.

In a bit of irony though, trees now outnumber parking spaces in the lot, despite the need for additional parking spaces being cited early and often as perhaps the most important improvement needed for the park.