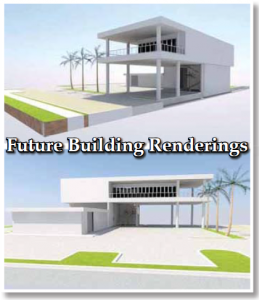 A new building combing modern architecture and a beachy vibe is rising up on Stickney Point Road and should be constructed by early spring.

A new Daiquiri Deck restaurant will anchor the three-story building, filling the top floor — a perch that affords outdoor-deck views of the Intracoastal and Gulf, from some vantages. On the first floor, the building will also house a new coffee shop and retain existing retail space for CB’s Island Outfitters store. The second floor will be used for storage.

The concept for the building was born about two years ago when the co-owners of CB’s Saltwater Outfitters and Island Outfitters store and the co-owners of the Daiquiri Deck local chain of restaurants started talking about a project they hoped would become a destination spot on the south end of the island.

The two groups of owners spent the next two years working together to negotiate the terms of a lease, work with an architect on the design of the building, and secure construction approval from the county. Construction work began July 11 at the site of the three-story building at 1250 Stickney Point Road, and after all the meetings and collaboration, Mason Tush, co-owner of CB’s, believes the result will be worth the effort.

“By adding this restaurant and coffee shop, we are hoping it will create more of a buzz for the area,” said Mason Tush, co-owner of C.B.’s. “It ought to be pretty cool.”

CB’s will own the new building, while Daiquiri Deck will lease the space and operate both the restaurant and the coffee shop. CB’s is a family-run business owned by Mason and his parents Aledia and Lee Tush; Daiquiri Deck, which currently operates three restaurants, is owned by Troy Syprett, Russell Matthes, and Matt Grover. CB’s purchased the property at 1250 Stickney Point Road in June, 2011, according to the Sarasota County Property Appraiser.

Venice-based J.E. Charlotte Construction Corp. is the construction contractor on the project, and the architect is Mark H. Smith of Smith Architects. The completion target for construction is early spring, Troy Syprett, managing partner with Daiquiri Deck told Siesta Sand. 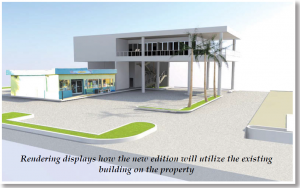 “We are looking to open in early Spring,” Syprett said.

The modern architecture, designed by architect Mark Smith, will be “warmed” by colorful accents and tropical landscaping such as royal palms, Syprett, said. “It will have a ton of trees and plants,” Syprett said.

A restaurant and coffee shop

The restaurant will meet the demand of the island’s growing south end market, which includes tourists staying at resorts and short-term condo rentals. “Siesta has become two markets,” Syprett said, noting that vacationers staying on the south end of the island often don’t want to drive or drive far when they do — especially when they have to battle traffic and try to find parking in peak tourist season.

The 4,100-square-foot restaurant will include 152 seats and will be a smaller version of the restaurant’s Village location 2.7 miles to the north. Although the new Stickney Point restaurant will be smaller, it will feature a similar layout and the same food and drink menu as the other Daiquiri Deck restaurants locations. The local chain operates three locations: the original in the Village; Daiquiri Deck St Armands; and Daiquiri Deck Island of Venice.

The 900-square-foot coffee shop, meanwhile, will have 20 to 25 seats, and feature breakfast sandwiches, along with different types of coffee drinks, including lattes and espressos, Syprett said. There isn’t a coffee shop on the south end currently, and both Syprett and Tush said they believe the café will meet a need.

“If they are renting a boat at CB’s or Siesta Key Marina, or if they keep a boat there [at the marina], or even people staying in a nearby condo can get a cup of coffee or a breakfast sandwich,” Syprett said.

“It should be a nice place,” Syprett said. There will be a sitting area with Wi Fi so people on vacation can come to check their emails, Syprett said.

“The whole concept is very family orientated,” Syprett said of the project.

“It should be a good addition to the south end of the key,” added Tush, “and make for a nice family fun location to give people things to do on vacation.”

Tush also believes the investment in the area will also be a boon for other nearby businesses. “I think it will improve everybody’s business on the South End,” he said.

The Daiquiri Deck and coffee shop will complement the business at CB’s Saltwater Outfitters, Tush said, offering dinning options for customers before or after renting a vessel. CB’s Saltwater Outfitters is located just two doors down at 1249 Stickney Point Road. “We really wanted to create a good synergy between the two businesses,” Tush told Siesta Sand.

“Their restaurant model obviously works; they have been around for a long time and have several other locations,” Tush added of Daiquiri Deck.

Letter from the Publisher