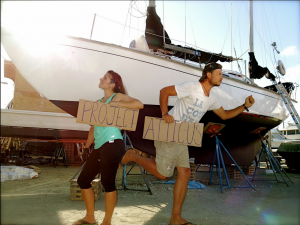 An exciting project is soon to be launched from Sarasota. An adventurous young couple—Desiree Golen and Jordan Wicht— soon will set sail on a 51 year old fiberglass sailboat named The Atticus, and they plan to circumnavigate the globe. While exploring the world, the daring pair intends to shoot an adventure travel documentary series.

What puts a remarkable dream like this into somebody’s head? Well, as a young child, Desiree Golen lived in Tokyo, Japan and often traveled to her mother’s hometown in Tela, Honduras. Growing up, she shared many faraway adventures with her parents and siblings. These experiences colored her view of life, and she grew up eager to explore the world.

She also learned to overcome adversity.  You see, early on, her mother noticed that Desiree was limited in what she was physically able to do.  Her worried parents took her to medical specialists in NYC, where she was diagnosed with Juvenile Rheumatoid Arthritis.

The prognosis was not good. As a young girl she was never allowed to do sports or tackle anything physically challenging. However, after working with her doctors for many years, she began a regimen that used a miraculous new drug on the market. Eventually she experienced 100 % recuperation.

It was in high school that Desiree first started to participate in sports. Her family had moved to Charlotte, NC, and Desiree saw boys at her school doing the pole vault. “Are girls allowed to do that?” she asked her coach.  Soon after, she was given a custom made pole that was just her size, and –being the first and only girl at her school to pole vault— she started jumping with the boys, all who were vaulting 10 or 12 feet into the air.  Before Desiree knew it, she was flying over a bar that was 10 feet high as well. However, when she was sent to compete in meets against other girls, she was astonished to find that her competitors only jumped heights of 6 or 8 feet. Desiree had surpassed all odds without even knowing they were there!

In a way, that was the story of her life. She graduated from Pomona College in Claremont California, and then moved to Silicon Valley where she quickly immersed herself into the Start-Up World. She started her own company when she was 23, a gaming company. Before long she began working at Airbnb, one of the most successful travel startups in the world. She then went on to found a food startup. She loved being surrounded by people who believed in the potential of the human spirit, the idea that people’s passion might drive the success of a product or an idea.

After four years in Silicon Valley, however, Desiree was getting restless. She met a girl who worked as a stewardess on a Super Yacht. Her new friend began speaking of the extraordinary adventures she was having as she traveled around the world. Not only that, her friend had been able to save some serious money.

Desiree decided it was time to try something else. She quit her job, dissolved the companies, moved to Ft. Lauderdale, and underwent stringent training to become a Super Yacht Stewardess.  She had entered a world that very few people even knew about.

“I was picked for my first boat because the Captain wanted someone who was good with computers,” says Desiree. “I ended up doing little videos for our guests, compiling all the pictures and videos of their adventures on the boat.” She added a soundtrack of music and beautiful scenic shots, and all were impressed with the professional results.

Her second job was with Motor Yacht Limitless, the largest flagged American Super Yacht in the world.  Desiree really liked meeting people with different stories who had traveled to the four corners of the earth.

Enter Jordan Wicht, a deck hand on Limitless. Jordan had grown up in Santa Cruz, California,

and had graduated in film production from San Diego State University. He had also developed a deep appreciation for the wilderness. Being of the adventurous sort, Jordan had backpacked extensively through California, Wyoming, Colorado, Utah, Canada, Europe, and Southeast Asia. He had also become a sailing instructor, a motorcycle enthusiast, a rock climber, and more.

Together, Desiree and Jordan began adventuring on their days off:  rollerblading, shark diving, rock climbing, running, swimming and kayaking. When Jordan told Desiree of his dream to one day circumnavigate the globe on a sailboat, she was hooked! Together they jumped ship and took a trip into the back county of Laos, where they met traveling filmmakers doing a documentary in one of the villages. Watching these filmmakers in action, Jordan and Desiree decided then and there that they would travel the world and make documentaries wherever they went.

Their Captain was sad to see them go, but most supportive.  The young couple packed up and

moved to Sarasota where Desiree’s father owns a restaurant called Senior Siesta. (The restaurant features Latin American recipes from all over the world, including Honduras, where her mother grew up.)  The couple soon found a really good, seaworthy sailboat in Key West. It was an Allied Seawind, the first fiberglass sailboat to circumnavigate the world. They named it The Atticus after the iconic character, Atticus Finch from the novel To Kill a Mockingbird. Their craft is small: only  30 feet long.

The sailboat’s original owner had once hoped to sail around the world, but sadly contracted cancer. Now the 51-year

old sailboat would be making the trip with Jordan as captain and Desiree as first mate. You can follow their journey online as they explore the most remote corners of the earth. They will share everything they experience through video “webisodes” being sent from the craft as it circumnavigates the globe.

The couple will sail The Atticus up from Key West to Sarasota as soon as she is ready for the trip. Once in Sarasota, the couple plans to launch a Kickstarter campaign to fundraise for the first leg of their trip to the Caribbean and Central America.

If you would like to partake of this adventure, go to www.projectatticus.com and take a look at the films Jordan and Desiree have already shot. Perhaps you will even join the Kickstarter campaign and help send this daring young couple on their way.